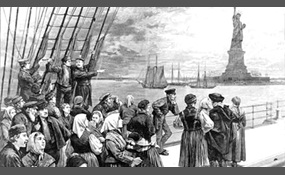 Immigration is a tricky thing. It allows for extra labor and increases the population, but is it really a good thing?

Quota immigration is one of the most common immigration policies. In this policy a certain amount of immigrants are allowed into the country. Usually a quota is set in place where the nation desires a certain type of immigrant, such as Hispanic or A... sian, and a certain amount of them are let in and then then the doors close for a select period of time. Sometimes quotas try to limit a certain ethnicity by placing a quota as well, such as limiting the amount of blacks, Hispanics, and/or Asians immigrating to the country   more
8 votes
1 comment
Quota Immigration - Voter Comments

Free migration or open immigration is the position that people should be able to migrate to whatever country they choose, free of monetary charge. Although the two are not the same issue, free migration is similar in spirit to the concept of free tr... ade, and both are advocated by free market economists on the grounds that economics is not a zero-sum game and that free markets are, in their opinion, the best way to create a fairer and balanced economic system, thereby increasing the overall economic benefits to all concerned parties. Many libertarians, liberals, socialists, and anarchists advocate open immigration, notwithstanding other noteworthy differences among these political ideologies. From a Human Rights perspective, free migration may be seen to complement Article 13 of the Universal Declaration on Human Rights: Everyone has the right to freedom of movement and residence within the borders of each state. Everyone has the right to leave any country, including his own, and to return to his country.Arguments against free immigration are usually cultural or security-related. Some arguments are nationalistic or what some critics claim to be "xenophobia", or ones similar to arguments against free trade; for example, protectionism. Specifically, an influx of cheap labor could easily deflate wages for workers who are already established in a particular labor market, and have a negative impact on the standard of living for the more established workers. Other critics of free immigration are concerned that it would be unfair to current homeowners if an influx of new residents greatly brought down the property values and attractiveness of living in that location, or, alternatively, increased the demand to live in the city so much that the home owner would not be able to keep up with increased taxes from higher property values. However, free market economists believe that competition is the essence of a healthy economic system, and that any short-term negative impact on individual economic factors that is caused by free immigration is more than justified by the prospects of long-term growth for the economy as a whole. Other arguments include the general impact on the environment, infrastructure, population density, governmental costs, immigrant criminality, incompatible culture of immigrants and overall quality of life decrease   more
3 votes
1 comment
Free migration/Open Immigration - Voter Comments

“Give me your tired, your poor, Your huddled masses yearning to breathe free, The wretched refuse of your teeming shore. Send these, the homeless, tempest-tossed to me, I lift my lamp beside the golden door!” Naturalization allows citizens to eithe... r immediately become citizens as soon as they enter the country or are allowed to immediately undergo the nation's naturalization process. Naturalization is the legal act or process by which a non-citizen in a country may acquire citizenship or nationality of that country. It may be done by a statute, without any effort on the part of the individual, or it may involve an application and approval by legal authorities. The rules of naturalization vary from country to country and typically include a minimum legal residency requirement, and may specify other requirements such as knowledge of the national dominant language or culture, a promise to obey and uphold that country's laws. An oath or pledge of allegiance is also sometimes required. Some countries also require that the person renounce any other citizenship that they currently hold, forbidding dual citizenship, but whether this renunciation actually causes loss of the person's original citizenship, as seen by the host country and by the original country, will again depend on the laws of the countries involved. The massive increase in population flux due to globalization and the sharp increase in the numbers of refugees following World War I created a large number of stateless persons, people who were not citizens of any state   more
1 vote
0 comments
Naturalization - Voter Comments
No Comments
Vote & Comment
4

The closed door policy is generally an immigration policy that focuses on not letting immigrants into the country. Sometimes immigrants are allowed under special circumstances, such as uniting families, but most of the time the doors are completely ... shut off   more
1 vote
0 comments
Closed door policy - Voter Comments
No Comments
Vote & Comment
5

No one gets out!

A "no one gets out" policy is the extreme version of the closed door policy. Once again, the immigration doors are closed and immigrants are only allowed into the country under special circumstances. However, in addition no one in the country is all... owed to emigrate to a different country. This is generally considered a police state and is only done under extreme circumstances   more
0 votes
0 comments
No one gets out! - Voter Comments
No Comments
Vote & Comment
Leave a comment...
(Maximum 900 words)