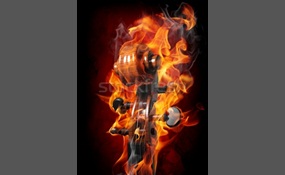 What musical instrument has the best sound?

I would include vocals, but that can vary quite greatly. Feel free to add others.

cludwig says2014-07-10T04:04:46.7810044-05:00
Report Post
As a composer, I have written for most instruments. The Piano, however, is the gateway to all instruments. Every composer should be able to play and write for piano. It is an instrument of near limitless versatility; capable of subtle nuances and unique colours. For a composer, it can be the soul of the creative process; a way to explore the greatest depths of one's compositional craft, technique and innermost feelings.
Vote & Comment
2

It depends on how I feel

The Great Highland bagpipe is an instrument that in modern practice is identical, and historically was analogous or identical, to the Great Irish War pipes and is a type of bagpipe native to Scotland. It has achieved widespread recognition through i... ts usage in the British military and in pipe bands throughout the world.The bagpipe is first attested in Scotland around 1400 AD, having previously appeared in European artwork in Spain in the 13th century. The earliest references to bagpipes in Scotland are in a military context, and it is in that context that the Great Highland bagpipe became established in the British military and achieved the widespread prominence it enjoys today, whereas other bagpipe traditions throughout Europe, ranging from Portugal to Russia, almost universally went into decline by the late 19th and early 20th century.Though widely famous for its role in military and civilian pipe bands, the Great Highland bagpipe is also used for a solo virtuosic style called piobaireachd, or simply pibroch   more
1 vote
0 comments
Great Highland Bagpipe - Voter Comments
No Comments
Vote & Comment
9

The lyre is a string instrument known for its use in Greek classical antiquity and later. The word comes via Latin from the Greek; the earliest reference to the word is the Mycenaean Greek ru-ra-ta-e, meaning "lyrists" and written in the Linear B sc... ript. The lyres of Ur, excavated in ancient Mesopotamia, date to 2500 BC. The earliest picture of a lyre with seven strings appears in the famous sarcophagus of Hagia Triada. The sarcophagus was used during the Mycenaean occupation of Crete. The recitations of the Ancient Greeks were accompanied by lyre playing. The lyre of classical antiquity was ordinarily played by being strummed with a plectrum, like a guitar or a zither, rather than being plucked, like a harp. The fingers of the free hand silenced the unwanted strings in the chord. The lyre is similar in appearance to a small harp but with distinct differences."Lyre" can either refer specifically to a common folk-instrument, which is a smaller version of the professional cithara and eastern-Aegean barbiton, or "lyre" can refer generally to all three instruments as a family   more
0 votes
0 comments
Lyre - Voter Comments
No Comments
Vote & Comment
13

The balalaika is a Russian stringed musical instrument with a characteristic triangular body and three strings.The balalaika family of instruments includes instruments of various sizes, from the highest-pitched to the lowest: the piccolo balalaika, ... prima balalaika, secunda balalaika, alto balalaika, bass balalaika, and contrabass balalaika. The prima balalaika is the most common. All have three-sided bodies; spruce, evergreen, or fir tops; and backs made of three to nine wooden sections. They are typically strung with three strings.The prima balalaika, secunda and alto are played either with the fingers or a plectrum, depending on the music being played, and the bass and contrabass are played with leather plectra. The rare piccolo instrument is usually played with a pick   more
0 votes
0 comments
Balalaika - Voter Comments
No Comments
Vote & Comment
17

In music, the organ is a keyboard instrument of one or more divisions, each played with its own keyboard, played either with the hands or with the feet. The organ is a relatively old musical instrument in the Western musical tradition, dating from t... he time of Ctesibius of Alexandria who is credited with inventing the hydraulis. It gradually assumed a prominent place in the liturgy of the Catholic Church. Subsequently it re-emerged as a secular and recital instrument   more
0 votes
0 comments
Organ - Voter Comments
No Comments
Vote & Comment
27

The didgeridoo is a wind instrument developed by Indigenous Australians of northern Australia around 1,500 years ago and still in widespread use today both in Australia and around the world. It is sometimes described as a natural wooden trumpet or "... drone pipe". Musicologists classify it as a brass aerophone.There are no reliable sources stating the didgeridoo's exact age. Archaeological studies of rock art in Northern Australia suggest that the people of the Kakadu region of the Northern Territory have been using the didgeridoo for less than 1,000 years, based on the dating of paintings on cave walls and shelters from this period. A clear rock painting in Ginga Wardelirrhmeng, on the northern edge of the Arnhem Land plateau, from the freshwater period shows a didgeridoo player and two songmen participating in an Ubarr Ceremony.A modern didgeridoo is usually cylindrical or conical, and can measure anywhere from 1 to 3 m long. Most are around 1.2 m long. Generally, the longer the instrument, the lower the pitch or key of the instrument. However, flared instruments play a higher pitch than unflared instruments of the same length   more
0 votes
0 comments
Didgeridoo - Voter Comments
No Comments
Vote & Comment
28

The euphonium is a conical-bore, baritone-voiced brass instrument.The euphonium derives its name from the Greek word euphonos, meaning "well-sounding" or "sweet-voiced". The euphonium is a valved instrument; nearly all current models are piston valv... ed, though rotary valved models do exist.A person who plays the euphonium is sometimes called a euphoniumist, euphophonist, or a euphonist, while British players often colloquially refer to themselves as euphists, or euphologists. Similarly, the instrument itself is often referred to as eupho or euph   more
0 votes
0 comments
Euphonium - Baritone - Voter Comments
No Comments
Vote & Comment
30

A mandolin is a musical instrument in the lute family. It usually has four courses of doubled strings. The two strings in each course are tuned in unison. The courses are tuned in a succession of perfect fifths, and plucked with a plectrum. It is th... e soprano member of a family that includes the mandola, octave mandolin, mandocello, and mandobass. It descends from the mandore.There are many styles of mandolin, but three are common, the Neapolitan mandolin, the carved-top mandolin and the flat-top mandolin. The carved-top or arch-top mandolin has a much shallower, arched back, and an arched top—both carved out of wood. The flat-top mandolin is similar to a guitar, using thin sheets of wood for the body, braced on the inside for strength. Each style of instrument has its own sound quality and is associated with particular forms of music. Neapolitan mandolins feature prominently in European classical music and traditional music. Carved-top instruments are common in American folk music and bluegrass music. Flat-top instruments are less specific to a music genre but are commonly used in Irish and British folk music   more
0 votes
0 comments
Mandolin - Voter Comments
No Comments
Vote & Comment
32

The sitar is a plucked stringed instrument used mainly in Hindustani music and Indian classical music. The instrument descended from a similar but simpler Persian instrument called the Setar and its predecessor the Dutar. The sitar flourished in the...  16th and 17th centuries and arrived at its present form in 18th century India. It derives its distinctive timbre and resonance from sympathetic strings, bridge design, a long hollow neck and a gourd resonating chamber.Used widely throughout the Indian subcontinent, the sitar became popularly known in the wider world through the work of Ravi Shankar beginning in the late 1950s and early 1960s. The sitar saw further use in popular music after the Beatles featured the sitar in their compositions "Norwegian Wood", "Within You Without You", "Tomorrow Never Knows" and "Love You To". Their use of the instrument came as a result of George Harrison's taking lessons on how to play it from Shankar and Shambhu Das. Brian Jones of the Rolling Stones also used a sitar in "Paint It Black" and a brief fad began for using the instrument in pop songs   more
0 votes
0 comments
Sitar - Voter Comments
No Comments
Vote & Comment
36