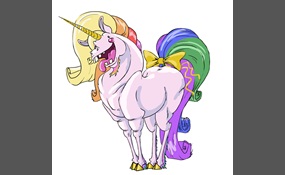 What mythical creature do you most wish was real?

A dragon is a legendary creature, typically with serpentine or reptilian traits, that features in the myths of many cultures. There are two distinct cultural traditions of dragons: the European dragon, derived from European folk traditions and ultim... ately related to Greek and Middle Eastern mythologies, and the Chinese dragon, with counterparts in Japan, Korea and other East Asian countries.The two traditions may have evolved separately, but have influenced each other to a certain extent, particularly with the cross-cultural contact of recent centuries. The English word "dragon" derives from Greek δράκων, "dragon, serpent of huge size, water-snake"   more
6 votes
0 comments
Dragon - Voter Comments
No Comments
Vote & Comment
3

ITunes is a media player, media library, and mobile device management application developed by Apple Inc. It is used to play, download, and organize digital audio and video on personal computers running the OS X and Microsoft Windows operating syste... ms. The iTunes Store is also available on the iPod Touch, iPhone, and iPad.Through the iTunes Store, users can purchase and download music, music videos, television shows, audiobooks, podcasts, movies, and movie rentals in some countries, and ringtones, available on the iPhone and iPod Touch. Application software for the iPhone, iPad and iPod Touch can be downloaded from the App Store.ITunes 11 is the most recent version of iTunes, available for OS X v10.6.8 or later, as well as Windows XP or later. It was released on November 29, 2012, one month later than expected, because of a delay by Apple, which explained that it needed extra time to complete the revisions necessary to complete the update   more
1 vote
1 comment
IT - Voter Comments

God is often conceived as the Supreme Being and principal object of faith. The concept of God as described by theologians commonly includes the attributes of omniscience, omnipotence, omnipresence, omnibenevolence, divine simplicity, and eternal and...  necessary existence. In theism, God is the creator and sustainer of the universe, while in deism, God is the creator of the universe. Monotheism is the belief in the existence of one God or in the oneness of God. In pantheism, God is the universe itself. In atheism, God is purported not to exist, while deemed unknown or unknowable within the context of agnosticism. God has also been conceived as being incorporeal, a personal being, the source of all moral obligation, and the "greatest conceivable existent". Many notable medieval philosophers and modern philosophers have developed arguments for and against the existence of God.There are many names for God, and different names are attached to different cultural ideas about God's identity and attributes   more
0 votes
0 comments
God - Voter Comments
No Comments
Vote & Comment
11

A leprechaun is a type of fairy in Irish folklore, usually taking the form of an old man, clad in a red or green coat, who enjoys partaking in mischief. Like other fairy creatures, leprechauns have been linked to the Tuatha Dé Danann of Irish mythol... ogy. The Leprechauns spend all their time busily making shoes, and store away all their coins in a hidden pot of gold at the end of the rainbow. If ever captured by a human, the Leprechaun has the magical power to grant three wishes in exchange for their release. Popular depiction shows the Leprechaun as being no taller than a small child, with a beard and hat, although they may originally have been perceived as the tallest of the mound-dwellers   more
0 votes
0 comments
Leprechaun - Voter Comments
No Comments
Vote & Comment
14