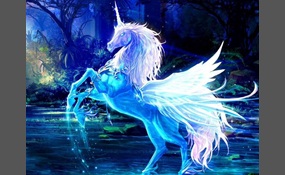 What mythological creature would you want to be?

In Greek mythology, a phoenix or phenix is a long-lived bird that is cyclically regenerated or reborn. Associated with the sun, a phoenix obtains new life by arising from the ashes of its predecessor. The phoenix was subsequently adopted as a symbol...  in Early Christianity. While the phoenix typically dies by fire in most versions of the legend, there are less popular versions of the myth in which the mythical bird dies and simply decomposes before being born again. According to some legends, the phoenix could live over 1400 years before rebirth. Herodotus, Lucan, Pliny the Elder, Pope Clement I, Lactantius, Ovid, and Isidore of Seville are among those who have contributed to the retelling and transmission of the phoenix motif.In the historical record, the phoenix "could symbolize renewal in general as well as the sun, time, the empire, metempsychosis, consecration, resurrection, life in the heavenly Paradise, Christ, Mary, virginity, the exceptional man, and certain aspects of Christian life"   more
3 votes
0 comments
Phoenix - Voter Comments
No Comments
Vote & Comment
4

The qilin is a mythical hooved chimerical creature known in Chinese and other East Asian cultures, said to appear with the imminent arrival or passing of a sage or illustrious ruler. It is a good omen thought to occasion prosperity or serenity. It i... s often depicted with what looks like fire all over its body. It is sometimes called the "Chinese unicorn" when compared with the Western unicorn   more
1 vote
0 comments
Qilin - Voter Comments
No Comments
Vote & Comment
7

The banshee, from Irish: bean sí is a female spirit in Irish mythology, usually seen as an omen of death and a messenger from the underworld.In legend, a banshee is a fairy woman who begins to wail if someone is about to die. In Scottish Gaelic myth... ology, she is known as the bean sìth or bean nighe and is seen washing the bloodstained clothes or armour of those who are about to die. Alleged sightings of banshees have been reported as recently as 1948. Similar beings are also found in Welsh, Norse and American folklore   more
0 votes
0 comments
Banshee - Voter Comments
No Comments
Vote & Comment
15

Krampus is a beast-like creature from the folklore of Alpine countries thought to punish children during the Christmas season who had misbehaved, in contrast with Saint Nicholas, who rewards well-behaved ones with gifts. Krampus is said to capture p... articularly naughty children and drag them off into the black forest.Krampus is represented as a beast-like creature, generally demonic in appearance. The creature has roots in Germanic folklore. Traditionally young men dress up as the Krampus in Austria, Romania, southern Bavaria, South Tyrol, northern Friuli, Czech Republic, Slovakia, Hungary, Slovenia and Croatia during the first week of December, particularly on the evening of 5 December, and roam the streets frightening children with rusty chains and bells. Krampus is featured on holiday greeting cards called Krampuskarten. There are many names for Krampus, as well as many regional variations in portrayal and celebration   more
0 votes
0 comments
Krampus - Voter Comments
No Comments
Vote & Comment
17

Kelpie, or water kelpie, is the Scots name given to a water being inhabiting the lochs and pools of Scotland. It has usually been described as appearing as a horse, but is able to adopt human form. Some accounts state that the kelpie retains its hoo... ves when appearing as a human, leading to its association with the Christian idea of Satan as alluded to by Robert Burns in his 1786 poem "Address to the Deil".Almost every sizeable body of water in Scotland has an associated kelpie story, but the most extensively reported is that of Loch Ness. Parallels to the general Germanic neck and the Scandinavian bäckahäst have been observed. More widely, the wihwin of Central America and the Australian bunyip have been seen as counterparts. The origin of the belief in malevolent water horses has been proposed as originating in human sacrifices once made to appease gods associated with water, but narratives about the kelpie also served a practical purpose in keeping children away from dangerous stretches of water, and warning young women to be wary of handsome strangers   more
0 votes
0 comments
Kelpie - Voter Comments
No Comments
Vote & Comment
Leave a comment...
(Maximum 900 words)