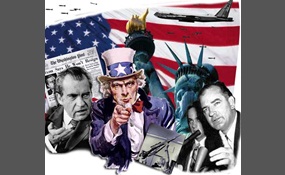 What political ideology should YYW explain next?

I've got a series of threads about political ideologies, and I'm trying to figure out which one I should talk about next.

Many of these fall under "anarchy," but I just wanted to show the diversity of options one has.
3 votes
0 comments
Deep Ecology/ecofeminism/green anarchy, libertarian socialism, anarcha-feminism, post-anarchism, veganarchy, post-colonial anarchism, anarquismo sin adjetivos - Voter Comments
No Comments
Vote & Comment
6

Social democracy is a political ideology that officially has as its goal the establishment of democratic socialism through reformist and gradualist methods. Alternatively, social democracy is defined as a policy regime involving a universal welfare ... state and collective bargaining schemes within the framework of a capitalist economy. It is often used in this manner to refer to the social models and economic policies prominent in Western and Northern Europe during the later half of the 20th century.Following the split between reformists and revolutionary socialists in the Second International, Social democrats have advocated for a peaceful and evolutionary transition of the economy to socialism through progressive social reform of capitalism. Social democracy asserts that the only acceptable constitutional form of government is representative democracy under the rule of law. It promotes extending democratic decision-making beyond political democracy to include economic democracy to guarantee employees and other economic stakeholders sufficient rights of co-determination. It supports a mixed economy that opposes the excesses of capitalism such as inequality, poverty, and oppression of various groups, while rejecting both a totally free market or a fully planned economy. Common social democratic policies include advocacy of universal social rights to attain universally accessible public services such as education, health care, workers' compensation, and other services, including child care and care for the elderly. Social democracy is connected with the trade union labour movement and supports collective bargaining rights for workers. Most social democratic parties are affiliated with the Socialist International   more
1 vote
0 comments
Social democracy - Voter Comments
No Comments
Vote & Comment
8