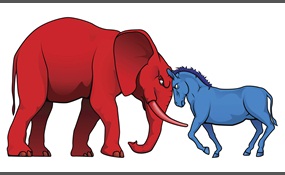 What political party do you support?

The Republican Party, also commonly called the GOP, is one of the two major contemporary political parties in the United States, the other being the Democratic Party. Founded by anti-slavery activists in 1854, it dominated politics nationally for mo... st of the period from 1860 to 1932. There have been 18 Republican presidents, the first being Abraham Lincoln, serving from 1861 to 1865, and the most recent being George W. Bush, serving from 2001 to 2009. The most recent Republican presidential nominee was former Massachusetts Governor Mitt Romney.The party's platform is generally based upon American conservatism, in contrast to the Democratic Party, whose members endorse more liberal policies. American conservatism of the Republican Party is not wholly based upon rejection of the political ideology of liberalism; some principles of American conservatism are based on classical liberalism. Rather, the Republican Party's conservatism is largely based upon its support of classical principles against the social liberalism of the Democratic Party that is considered American liberalism in contemporary American political discourse.In the 113th Congress, elected in 2012, the Republican Party holds a majority of seats in the United States House of Representatives and a minority of seats in the United States Senate. The party holds the majority of governorships as well as the majority of state legislatures   more
10 votes
0 comments
Republican Party - Voter Comments
No Comments
Vote & Comment
2

The Democratic Party is one of the two major contemporary political parties in the United States, along with the younger Republican Party. Tracing its origins back to the Democratic-Republican Party, the modern Democratic Party was founded around 18... 28. There have been 15 Democratic presidents, the first being Andrew Jackson, who served from 1829 to 1837; the most recent is the current president, Barack Obama, who has served since 2009.Since the 1930s, the party has promoted a social liberal platform. Until the late 20th century the party had a powerful conservative and populist wing based in the rural South, which over time has greatly diminished. Today its Congressional caucus is composed mostly of progressives and centrists.As of the 113th Congress, following the 2012 elections, the Democratic Party holds a minority of seats in the House of Representatives and a majority of seats in the United States Senate, as well as a minority of state governorships and control of a minority of state legislatures   more
9 votes
0 comments
Democratic Party - Voter Comments
No Comments
Vote & Comment
3

In politics, an independent or nonpartisan politician is an individual not affiliated to any political party. There are numerous reasons why someone may stand for office as an independent.Independents may hold a centrist viewpoint between those of m... ajor political parties. Sometimes they hold a viewpoint more extreme than any major party, have an ideology comprising ideas from both sides of the political spectrum, or may have a viewpoint based on issues that they do not feel that any major party addresses.Other independent politicians may be associated with a political party, be former members of it, or have views that align with it, but choose not to stand under its label. Others may belong to or support a political party but believe they should not formally represent it and thus be subject to its policies.In some countries political parties are illegal and all candidates effectively stand as independents.In running for public office, independents sometimes choose to form an alliance rather than a party, and formally register their "independents" group. Some other independent candidates choose to aggregate themselves as a political party   more
4 votes
0 comments
Independent - Voter Comments
No Comments
Vote & Comment
5

The Libertarian Party is an American national political party that reflects, represents and promotes the ideas and philosophies of libertarianism. The Libertarian Party was formed in Colorado Springs, Colorado, in the home of David F. Nolan on Decem... ber 11, 1971. The founding of the party was prompted in part due to concerns about the Vietnam War, conscription, and the end of the gold standard. Although there is not an explicitly-labeled "left" or "right" designation of the party, many members, such as 2012 presidential nominee Gary Johnson, state that they are more socially liberal than the Democrats, but more fiscally conservative than the Republicans. The party has generally promoted a classical liberal platform, in contrast to the modern liberal and progressive platform of the Democrats and the more conservative platform of the Republicans. Current policy positions include lowering taxes, allowing people to opt-out of Social Security, abolishing welfare, ending the prohibition on illegal drugs, and supporting gun ownership rights.In the 30 states where voters can register by party, there is a combined total of 330,811 voters registered under the party. By this count the Libertarian Party is the third-largest party by membership in the United States and it is the third-largest political party in the United States in terms of the popular vote in the country's elections and number of candidates run per election. Due to this, it has been labelled by some as the United States' third-largest political party. It is also identified by many as the fastest growing political party in the United States   more
3 votes
0 comments
Libertarian Party - Voter Comments
No Comments
Vote & Comment
6

The Constitution Party is a right-wing and theocratic political party in the United States. The party asserts that the US is a Christian nation founded on the Bible and that US jurisprudence should be restored to what the party claims is its "Biblic... al foundations". The Constitution Party advocates a platform which reflects the Party's understanding of the principles set forth in the Declaration of Independence, the Constitution of the United States, the Bible, and the Bill of Rights.The party was founded as the "U.S. Taxpayers' Party" by Howard Philips in 1991. Phillips was the party's candidate in the 1992, 1996 and 2000 presidential elections. The party's official name was changed to The Constitution Party in 1999; however, some state affiliate parties are known under different names. The party's platform is predicated on the party's understanding of the original intent of the nation's founding documents. The party absorbed the American Independent Party, originally founded for George Wallace's 1968 presidential campaign. The Constitution Party receives substantial support from Christian Right organizations and claims to be the "philosophical home" of the Tea Party. The Constitution Party came in second place in the 2010 Colorado gubernatorial election, however as of January 2014, the party had not won any legislative or executive branch races at either the national or state level   more
2 votes
0 comments
Constitution Party - Voter Comments
No Comments
Vote & Comment
7

The Socialist Party is a social democratic political party in France, and the largest party of the French centre-left. The PS is one of the two major contemporary political parties in France, along with the Union for a Popular Movement on the centre... -right. The Socialist Party replaced the earlier French Section of the Workers' International in 1969, and is currently led by First Secretary Harlem Désir who is the first black person to lead a major European political party. The PS is a member of the Party of European Socialists, the Socialist International and the Progressive Alliance.The PS first won power in 1981, when its candidate François Mitterrand was elected President of France in the 1981 presidential election. Under Mitterrand, the party achieved a governing majority in the National Assembly from 1981 to 1986 and again from 1988 to 1993. PS leader Lionel Jospin lost his bid to succeed Mitterrand as president in the 1995 presidential election against Rally for the Republic leader Jacques Chirac, but became prime minister in a cohabitation government after the 1997 parliamentary elections, a position Jospin held until 2002, when he was again defeated in the presidential election   more
1 vote
0 comments
Socialist Party - Voter Comments
No Comments
Vote & Comment
8

The Communist Party USA is a Marxist-Leninist political party in the United States, and is the largest communist party in the country. Established in 1919, it has a long, complex history that is closely related to the histories of similar communist ... parties worldwide and the U.S. labor movement.For the first half of the 20th century, the Communist Party was a highly influential force in various struggles for democratic rights. It played a prominent role in the U.S. labor movement from the 1920s through the 1940s, having a major hand in founding most of the country's first industrial unions while also becoming known for opposing racism and fighting for integration in workplaces and communities during the height of the Jim Crow period of U.S. racial segregation. Historian Ellen Schrecker concludes that decades of recent scholarship offer "a more nuanced portrayal of the party as both a Stalinist sect tied to a vicious regime and the most dynamic organization within the American Left during the 1930s and '40s".By August 1919, only months after its founding, the Communist Party claimed 50,000 to 60,000 members. Members also included anarchists and other radical leftists. In contrast, the more moderate Socialist Party of America had 40,000 members. The sections of the Communist Party's International Workers Order meanwhile organized for communism around linguistic and ethnic lines, providing mutual aid and tailored cultural activities to an IWO membership that peaked at 200,000 at its height   more
1 vote
1 comment
Communist Party USA - Voter Comments