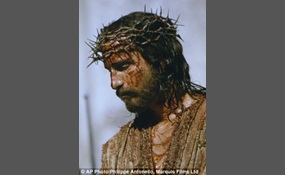 What race was Jesus Christ?

Despite my name, I've always thought of Jesus as probably a bit of a dark shade of Indo-European/Middle Eastern/subAsian, but Jesus is usually depicted as white and a lot of black people are under the impression that he was darker than the dark side of the moon, so, you know.

Black-Jesus says2015-04-11T10:19:40.2770162-05:00
Report Post
So you're saying that Jesus Christ, born and raised in the middle east, born to Mary and Joseph, natives of the middle east, from a long line of middle eastern jews, was white? Are you saying that at some point, a bunch of tribal Europeans traversed 1,500 Km to go to the middle of nowhere in Nazareth and Bethlehem, adopted their language, their culture, and their history, all for absolutely no reason?