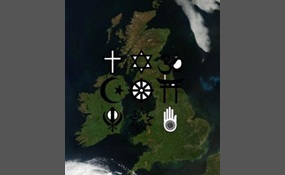 What "religion" or "belief" do you think will dominate the UK in the future?

Technically Christianity is still the largest religion, with Atheism second, followed by Islam and the others which make up a tiny percentage as of current.

CosmoKramer95 says2014-05-08T17:18:38.8595988-05:00
Report Post
Unfortunately, I think atheism/agnosticism/secularism will dominate the UK's future, due to its current low and decreasing level of religiosity.

Xytaglyph says2014-05-08T18:43:49.7211360-05:00
Report Post
As the human race makes more advances in science, I feel that not only will you see the atheist population in the UK rise, you will see the Atheist population around the world rise.

A341 says2014-05-08T11:14:38.0839485-05:00
Report Post
The big two appear to be Atheism and Christianity currently with atheism on the rise and Christianity on the decline. Islam makes up a small fraction of the population at present but appears much more resistant to people leaving the faith than Christianity (or any of the smaller faiths) because of intimidation. While atheists will probably be the majority only a small fraction identify strongly as atheists while almost all muslims strongly identify as muslim.
Vote & Comment
4