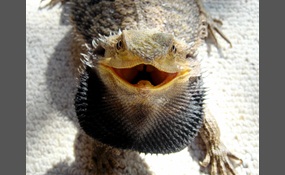 What reptile makes the best pet?

discomfiting says2014-06-07T06:14:38.7945242-05:00
Report Post
I have several leopard geckos & a corn snake. Geckos are cute and easier to take care of but snakes are difficult for people without experience of reptile or basic animal caring.

The Cuban green anole is a species of anole found exclusively in Cuba, though it was introduced to parts of Florida. It is part of the A.Carolinensis clade of anoles.
1 vote
1 comment
Green anole - Voter Comments

Pogona vitticeps, the central bearded dragon, is a species of agamid lizard occurring in a wide range of arid to semiarid regions of Australia. This species is very popularly kept as a pet and exhibited in zoos.
1 vote
0 comments
Bearded Dragon - Voter Comments
No Comments
Vote & Comment
5

SweetTea says2014-06-06T15:39:06.8087917-05:00
Report Post
None! Many reptiles carry Salmonella. That is a dangerous germ. The more you know about it, the more cautious you'll become. Http://www.Cdc.Gov/Features/SalmonellaFrogTurtle/ http://www.Webmd.Com/food-recipes/food-poisoning/tc/salmonellosis-topic-overview http://www.Babymed.Com/blogs/jaclyn-stewart/make-avoiding-salmonella-during-pregnancy-priority
Privacy Policy | Terms of Use
Sitemap | View Desktop Version
©2021 Debate.org. All rights reserved.