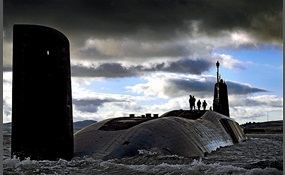 What should the UK do with its nuclear weapons?

Keep it how it is

Don't destroy or give them away or don't reduce the amount of them. Just leave it as it is.
3 votes
2 comments
Keep it how it is - Voter Comments

In an environmentally friendly way, It may cost more but its the only good way.
3 votes
0 comments
Dismantle them carefully - Voter Comments
No Comments
Vote & Comment
3

Sell them to Russia

Sell them to anyone who wants them

If they get despite they could sell them to Iran or north Korea they do want nukes.
0 votes
0 comments
Sell them to anyone who wants them - Voter Comments
No Comments
Vote & Comment
6

Fire them at some island

Sell them to allies

The UK could sell them to its allies, It may take some time but it would benefit greatly with the money gained.
0 votes
0 comments
Sell them to allies - Voter Comments
No Comments
Vote & Comment
Leave a comment...
(Maximum 900 words)

biggest_pro_going says2015-04-18T07:34:07.4646682-05:00
Report Post
The UK does not need nukes If it was going to use them on some poor Arab nation or "rough state" America would have already used like 10 so their is no need for the UK to have them. Also If the US and Russia have a nuclear war the stupid UK will probably "help" America by using some of its own so instead of Russia and the US being destroyed Russia the US and Briton would be destroyed.

CannedBread says2015-04-19T19:02:24.7950619-05:00
Report Post
In response to Kreakin that's a good idea, the Ukraine is the little nerd at school getting picked on by the jocks. Also I really like your profile picture thing.
Privacy Policy | Terms of Use
Sitemap | View Desktop Version
©2020 Debate.org. All rights reserved.