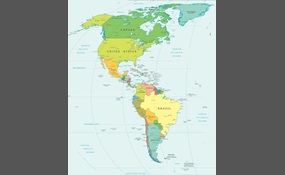 What should the United States' [official] demonym/gentilic term be?

The term "America" is often used exclusively for anything related to the United States, from its culture, its people and as a nation itself. However the term "America" was applied to the continental landmass in the western hemisphere originally inhabited by Amerindians and later discovered & colonized by European voyagers. Therefore it would be correct to regard the nations in the continent as "Americans" as it is simply redundant to separate them with hyphenated labels such as "Latin-" or "South-America" a

F*** YEAH! (This one is obviously a joke)
8 votes
2 comments
'Murica/Murka/Merica - Voter Comments

In the same vein as "North-American", "South-American", and "[nationality/ethnicity]-American" State-American gives a more specific identity as it is based on the latter two parts of the entire nation's name (United STATES of AMERICA), doting on the...  main feature of the nation (the 50 states where it based its name from) as well as keeping the term "American"   more
1 vote
0 comments
State-American - Voter Comments
No Comments
Vote & Comment
3
VOTING CLOSED

ramm5555 says2015-09-07T00:33:45.4445466Z
Report Post
Sh*thole
Anonymous says2015-09-11T00:57:55.7187728Z
Report Post
None of these are decent alternatives. No other country within these two continents have "America" in their title. A person from Columbia is Colombian, someone from Bolivia is Bolivian, and someone from Guyana is Guyanese. So someone from the United States of America is American.

Network says2015-09-12T19:41:32.3361491Z
Report Post
@fdsa, this is a false analogy. Someone from the United Arab Emirates is an Emirati, not an Arabian. A person is European because she comes from Europe, not because her country is part of the European Union. From the same logic, American applies to everyone who live in America, and the demonym of USA citizens should be based on the "states" part.

58539672 says2015-09-12T20:36:37.8322758Z
Report Post
@Network That is not an accurate assessment. The vast majority of nations have three parts to their name. The qualifier for the type of government, the basic unit of organization, and the land mass that it inhabits. A nations people are often refereed to as the name of the land plus a small prefix or suffix to donate the phrase "people of". For the United Arab Emirates, United would be the type of government (in this case a system of various united entities), Arab is the land mass, and Emirates is the unit of organization (an emirate is a section of land owned by an emir). Therefor, they are called Arabians (Arab being the place and "ian" meaning "people of"). For the United States of America, United is the government, States is the unite of organization, and America is the land mass. So they are called Americans for short.

Hawlucha says2015-09-12T21:20:21.1876439Z
Report Post
That still doesn't explain the rudimentary naming of two landmasses often split into even smaller regions be it geographical or cultural. The US, Canada, Belize, and US/UK territories are considered to be "Anglo-"America as opposed to Latin-America. Countries like Panama, Costa Rica, Honduras, and sometimes Mexico are "Central-"American nations yet only the US is the exception to NOT be hyphenated simply because it has the name of the continent in its official name and thus should appropriate it. Those are double-standards right there.

Network says2015-09-13T16:00:10.9184181Z
Report Post
@58539672 Then explain why the demonym for United Arab Emirates citizens is Emirati, and why Arabian is a general term commonly applied to refer to people from Algeria, Iran, Saudi Arabia and many other Middle Eastern countries as a whole? By the same standard, American should be a general term for people from America, and US citizens should be based on their unit of government (either State-American or, yes, Statesider).

MakeSensePeopleDont says2015-09-15T12:03:40.8357640Z
Report Post
What the heck are you talking about? You are confusing national identity with both ethnicity and race. First the two most often confused; race and ethnicity. While race has to do with genetically transmitted physical characteristics such as skin color; ethnicity has to do with cultural, linguistic, AND racial characteristics. National identity deals strictly with the country you legally reside in on a permanent basis AND pledge full allegiance to. Next, when you identify yourself, you identify as a resident of a country, not a resident of a continent. For example, when asked where you are from, you say "I'm French" or "Egyptian" or "Italian", you do not say "I'm European" or "African" as you identify with a nation, not a continent. Finally, let me correct your misunderstanding of the classifications and names of the western hemispheric landmass as a whole and broken down. The entire landmass is not called America, it is called "the Americas" notice the plural. Next, you do realize the Americas is NOT a continent, it is the combination of two separate continents. These 2 continents are separated by the equator for the most part; for this reason, they are called "North America" and "South America". Calling the entire landmass "America" would be like calling Europe, Asia and Africa one continent named Euroasica. Now, inside of North America is a nation-state (country) called "the United States of America" using the term "America" is not proper and is instead similar to using slang terminology. We are called "the United States of America" because although each of the 50 states have their own separate state government including laws as well as their own state military; these are then united under one umbrella nation-state named "the United States of America" giving the broad governing ability and military power authority to one entity for efficiency purposes while each state still retains the ability to govern themselves, make their own rule of law, enforce their own laws, bring the military units of their state (known as the National Guard) to arms, and they even retain the power to secede from the union at any time. So bottom line, we are "Americans", referencing the national identity as is normal to do. Want a set of interesting fun facts? "The United States of America" is named for the union of 13 colonies under 1 national flag. But wait...States....Colonies....What? Originally, the colonies belonged to 3 separate, foreign powers: English, the Dutch and the Swedish. The 13 colonies eventually all came under British rule and were split into 3 regions called"New England colonies", "Middle colonies" and "Southern colonies". They were considered colonies at the time because they were under rule of a foreign power who was a very long distance away and the colonies were ruled by a Colonial Government which employed royal governors appointed by the King to govern the territories by his law and under his authority. By early 1776 all royal governors had either fled or been jailed, ending colonial government. 11 of the 13 colonies, under the suggestion of the Continental Congress, then created their own constitutions, 2 colonies used their old charters. This action by all 13 colonies officially reclassified themselves as 13 states, void from British rule and separate from each other. The original 13 states are born. Another fun fact: The states declared independence from British rule on July 4th, 1776 right? Wrong! "The United Colonies" declared independence from British rule on July 4th, 1776. It was not until September 9th, 1776 that the Continental Congress made declaration that the name be changed heretofore from "United Colonies" to "United States"; this officially created (not birthed) the greatest nation the world has ever seen, the United States of America. Want another fun fact? Well, even after delivering the Declaration of Independence to King George III and officially announcing intent of revolutionary war shall the King not oblige, these 13 states were not yet a united nation. It was not until the ratification of a little remembered document by 11 states in 1778, the 12th state in 1779, and the final 13th state in 1781 that the separate states became a unified country; this document was named "the Articles of Confederation". Although popularly believed, July 4th is not the birthday of the U.S., it is independence day, but not her birthday. Her birthday is really on March 1st, 1781 once the final colony ratified the document. I'll give you one more freebie fun fact before I go; fast-forward to 2015. Although we are named "the United States of America", and we are said to be a union of the 50 states, we are actually 50 united nations making the United Nations of America; and here is why. To be classified a state, one must be able to enter into relations with a foreign power. However, under Article 1 Section 10 of the U.S. Constitution, no State shall enter into relations, alliances, or Confederation, etc. [...] nor should any State enact import or export duties, etc. except when absolutely necessary for inspection Laws with the net income going to the U.S. Treasury and all such Laws subject to the revision and Control of Congress (Not verbatim, see Article 1 Section 10 for verbatim). A state is also defined as having only a single government; this is generally used to differentiate between a territory in civil war like the warring tribes in Afghanistan, and an actual state. Since each of the U.S. states are governed by two separate governments (State and Federal), having two separate set of powers, one trumping the other in certain areas; this is the 2nd clause of the definition not being met. This means the 50 states are actually the 50 nations making a nation-state named "United States", we just leave them as United States as to give the assurance that at any point in time, a state may secede from the Union, reaffirming themselves as a State, independent from the Union and its rule of law.

Network says2015-09-15T14:14:59.3362665Z
Report Post
There are so many blatant mistakes in your arguments that it's funny. Louisiana was never British or Dutch or Swedish, but French then Spanish, you inverted the meaning of nations (which have control over foreign affairs) with states (which don't), and you claim that the United States are somehow "greater" than the many empires that actually conquered the world. Not to mention that Afro-Eurasia is a thing and that identifying people by their home continent (Arabian, Asian, etc.) is quite common. Native Americans aren't called that way because they have US citizenship, for instance.
Privacy Policy | Terms of Use
Sitemap | View Desktop Version
©2021 Debate.org. All rights reserved.