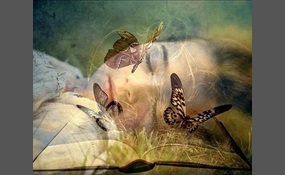 What "special type of dream" do you tend to have the most?

Recurring dreams repeat themselves with little variation in story or theme. These dreams may be positive, but most often they are nightmarish in content. Dreams may recur because a conflict depicted in the dream remains unresolved or ignored. ... Once you find a resolution to the problem, your recurring dreams will cease   more
6 votes
0 comments
Recurring Dreams - Voter Comments
No Comments
Vote & Comment
2

Dreams that incorporate familiar faces and places do not necessarily reveal hidden symbolic messages from the subconscious. They are simply reflections of everyday life. These types of dreams can incorporate activities going on whilst we sleep. For ... example, a phone ringing may initiate a dream about communicating with a family member   more
3 votes
1 comment
Dreams of Daily Life - Voter Comments

Epic dreams (also referred to as Great Dreams, Cosmic Dreams or Numinous Dreams) are so huge, so compelling, and so vivid that you cannot ignore them. The details of such dreams remain with you for years, as if you just dreamt it last night. These d... reams possess much beauty and contain many archetypal symbology. When you wake up from such a dream, you feel that you have discovered something profound or amazing about yourself or about the world. It feels like a life-changing experience   more
2 votes
2 comments
Epic Dreams - Voter Comments

Kreakin says2015-06-19T17:40:20.6553381-05:00
Report Post
These seem to stick with me. They might be a mix of problem solving also as they usually lead to some gain in insight into people usually. These seem to have been encoded in visual memory so i can easily recall them. I've experienced lots of situations as if through the eyes of someone else. Maybe these should be in a different category. Dreams are certainly a weird part of being human.

A nightmare is a disturbing dream that causes you to wake up feeling anxious and frightened. Nightmares may be a response to real life trauma and situations. These type of nightmares fall under a special category called Post-traumatic Stress Nightma... re (PSN). Nightmares may also occur because you have ignored or refused to accept a particular life situation. Research shows that most people who have regular nightmares have a family history of psychiatric problems, are involved in a rocky relationship or have had bad drug experiences. These people may have also contemplated suicide. Nightmares are an indication of a fear that needs to be acknowledged and confronted. It is a way for the subconscious to wake up and take notice. "Pay attention!   more
2 votes
1 comment
Nightmares - Voter Comments

Lucid dreams occur when you realize you are dreaming. "Wait a second. This is only a dream!" Most dreamers wake themselves up once they realize that they are dreaming. Other dreamers have cultivated the skill to remain in the lucid state of dreaming... . They become an active participant in their own dreams, making decisions in their dreams and influencing the dream's outcome without awakening. Get a more in depth look at lucid dreams   more
1 vote
0 comments
Lucid Dreams - Voter Comments
No Comments
Vote & Comment
6

Daydreaming is classified as a level of consciousness between sleep and wakefulness. Studies show that you have the tendency to daydream an average of 70-120 minutes a day. It occurs during waking hours when you let your imagination carry you away... . As your mind begins to wander and your level of awareness decreases, you lose yourself in your imagined scenario and fantasy   more
1 vote
1 comment
Daydreams - Voter Comments

Prophetic dreams, also referred to as precognitive or psychic dreams, are dreams that seemingly foretell the future. One rational theory to explain this phenomenon is that your dreaming mind is able to piece together bits of information and observ... ation that you may normally overlook or that you do not seriously consider. In other words, your unconscious mind knows what is coming before you consciously piece together the same information   more
1 vote
1 comment
Prophetic Dreams - Voter Comments

Najs says2015-06-19T17:37:13.5609402-05:00
Report Post
Although I have experience high levels of all of these types (but not a mutual dream), this type of dream I experience the most. Except the rational theory given of pieces of information and observation is not always true in my experience, that unfortunately I can prove.
Vote & Comment
8

Progressive dreams occur when you have a sequence of dreams that continue over a period of nights. The dream continues where you left off the previous night. Such dreams are problem-solving dreams and help to explore different options and various ap... proaches to a problem, situation or relationship   more
1 vote
0 comments
Progressive Dreams - Voter Comments
No Comments
Vote & Comment
9

Some dreams are said to be direct reflections of our needs in the conscious world. For example, a dream where the sleeper is shivering in the snow may simply mean an extra blanket is required.
1 vote
0 comments
Physiological Dreams - Voter Comments
No Comments
Vote & Comment
10

Some dreams reveal the “dark side” of our personality. This does not infer evil; it refers to what Jung described as the shadow-self. The parts of ourselves we repress. An example might be a Nun who dreams she is promiscuous. Such dreams are designe... d to balance our personality and give vent to emotions we would not usually seek to experience   more
0 votes
0 comments
Compensatory Dreams - Voter Comments
No Comments
Vote & Comment
11

I do not remember my dreams and/or I've never had any of these types of dreams.

People who tend to remember their dreams also respond more strongly than others to hearing their name when they're awake, new research suggests. Everyone dreams during sleep, but not everyone recalls the mental escapade the next day, and scientists...  aren't sure why some people remember more than others. To find out, researchers used electroencephalography to record the electrical activity in the brains of 36 people while the participants listened to background tunes, and occasionally heard their own first name. The brain measurements were taken during wakefulness and sleep. Half of the participants were called high recallers, because they reported remembering their dreams almost every day, whereas the other half, low recallers, said they only remembered their dreams once or twice a month. When asleep, both groups showed similar changes in brain activity in response to hearing their names, which were played quietly enough not to wake them. However, when awake, high recallers showed a more sustained decrease in a brain wave called the alpha wave when they heard their names, compared with the low recallers. "It was quite surprising to see a difference between the groups during wakefulness," said study researcher Perrine Ruby, neuroscientist at Lyon Neuroscience Research Center in France. The difference could reflect variations in the brains of high and low recallers that could have a role in how they dream, too, Ruby said   more
0 votes
0 comments
I do not remember my dreams and/or I've never had any of these types of dreams. - Voter Comments
No Comments
Vote & Comment
12

Mutual dreams are described as such when two people have the same dream. Mutual dreams may be planned, meaning that two people actively work toward achieving one dream scenario or goal. It is a way to improve communication and build trust. Mutual dr... eams can also be spontaneous. You find out that a friend, a significant other, faraway relative, or someone has had the same dream on the same night as you. Not much study has gone into the phenomenon of mutual dreams, but there is a very strong bond that exist between these two people   more
0 votes
0 comments
Mutual Dreams - Voter Comments
No Comments
Vote & Comment
13

Dreams have played a part in shaping religions and belief systems across the planet. From Jacob’s dreams of angels in the Bible, to Mohammed’s dream inspiring his spiritual mission in the Quran, to the “dreaming” of the Australian Aboriginals. Subse... quently, dream interpretation and analysis has been an ingrained component of human kind   more
0 votes
0 comments
Belief Dreams - Voter Comments
No Comments
Vote & Comment
14

These dreams are designed to impart a message to the sleeper that will aid them in overcoming a problem in their conscious life. It is said that very often such messages are delivered by a messenger whose identity is of utmost importance in discerni... ng the message   more
0 votes
0 comments
Problem-Solving Dreams - Voter Comments
No Comments
Vote & Comment
15

Healing dreams serve as messages for the dreamer in regards to their health. The Ancient Greeks called these dreams "prodromic". Many dream experts believe that dreams can help in avoiding potential health problems and healing when you are ill or wh... en you are grieving. Research shows that asthma and migraine sufferers have certain types of dreams before an attack. Your bodies are able to communicate to your mind through dreams. The dreams can "tell" you that something is not quite right with your bodies even before any physical symptoms show up. Dreams of this nature may be telling the dreamer that he or she needs to go to the dentist or doctor. If you can understand the language of dreams, your dreams will serve as an invaluable early warning system. They can help inform, advise and heal   more
0 votes
0 comments
Healing Dreams - Voter Comments
No Comments
Vote & Comment
17

Have you ever thought you have waken up and gone about your daily morning routine: getting up, brushing your teeth, eating breakfast and going to work, only to wake up "again" and realize that what just happened is just a dream. That sensation is re... ferred to as a false awakening   more
0 votes
0 comments
False Awakening Dreams - Voter Comments
No Comments
Vote & Comment
Leave a comment...
(Maximum 900 words)