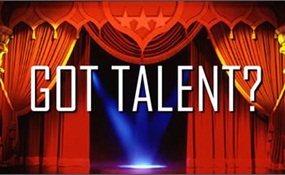 What talents do you have?

Music is an art form whose medium is sound and silence. Its common elements are pitch, rhythm, dynamics, and the sonic qualities of timbre and texture. The word derives from Greek μουσική.The creation, performance, significance, and even the definit... ion of music vary according to culture and social context. Music ranges from strictly organized compositions, through improvisational music to aleatoric forms. Music can be divided into genres and subgenres, although the dividing lines and relationships between music genres are often subtle, sometimes open to personal interpretation, and occasionally controversial. Within the arts, music may be classified as a performing art, a fine art, and auditory art. It may also be divided among art music and folk music. There is also a strong connection between music and mathematics. Music may be played and heard live, may be part of a dramatic work or film, or may be recorded.To many people in many cultures, music is an important part of their way of life. Ancient Greek and Indian philosophers defined music as tones ordered horizontally as melodies and vertically as harmonies. Common sayings such as "the harmony of the spheres" and "it is music to my ears" point to the notion that music is often ordered and pleasant to listen to. However, 20th-century composer John Cage thought that any sound can be music, saying, for example, "There is no noise, only sound." Musicologist Jean-Jacques Nattiez summarizes the relativist, post-modern viewpoint: "The border between music and noise is always culturally defined—which implies that, even within a single society, this border does not always pass through the same place; in short, there is rarely a consensus ... By all accounts there is no single and intercultural universal concept defining what music might be.   more
7 votes
1 comment
Music - Voter Comments

Writing is a medium of communication that represents language through the inscription of signs and symbols. In most languages, writing is a complement to speech or spoken language. Writing is not a language but a form of technology. Within a languag... e system, writing relies on many of the same structures as speech, such as vocabulary, grammar and semantics, with the added dependency of a system of signs or symbols, usually in the form of a formal alphabet. The result of writing is generally called text, and the recipient of text is called a reader. Motivations for writing include publication, storytelling, correspondence and diary. Writing has been instrumental in keeping history, dissemination of knowledge through the media and the formation of legal systems.As human societies emerged, the development of writing was driven by pragmatic exigencies such as exchanging information, maintaining financial accounts, codifying laws and recording history. Around the 4th millennium BCE, the complexity of trade and administration in Mesopotamia outgrew human memory, and writing became a more dependable method of recording and presenting transactions in a permanent form. In both Ancient Egypt and Mesoamerica writing may have evolved through calendrics and a political necessity for recording historical and environmental events   more
3 votes
0 comments
Writing - Voter Comments
No Comments
Vote & Comment
3

Acting is the work of an actor or actress, which is a person in theatre, television, film, or any other storytelling medium who tells the story by portraying a character and, usually, speaking or singing the written text or play.Most early sources i... n the West that examine the art of acting discuss it as part of rhetoric   more
2 votes
1 comment
Acting - Voter Comments

Art is a diverse range of human activities and the products of those activities; this article focuses primarily on the visual arts, which includes the creation of images or objects in fields including painting, sculpture, printmaking, photography, a... nd other visual media. Architecture is often included as one of the visual arts; however, like the decorative arts, it involves the creation of objects where the practical considerations of use are essential—in a way that they usually are not in a painting, for example. Music, theatre, film, dance, and other performing arts, as well as literature and other media such as interactive media, are included in a broader definition of art or the arts. Until the 17th century, art referred to any skill or mastery and was not differentiated from crafts or sciences, but in modern usage the fine arts, where aesthetic considerations are paramount, are distinguished from acquired skills in general, such as the decorative or applied arts.Art may be characterized in terms of mimesis, expression, communication of emotion, or other qualities. During the Romantic period, art came to be seen as "a special faculty of the human mind to be classified with religion and science". Though the definition of what constitutes art is disputed and has changed over time, general descriptions mention an idea of imaginative or technical skill stemming from human agency and creation   more
0 votes
0 comments
Art - Voter Comments
No Comments
Vote & Comment
7

Art rock is a subgenre of rock music that originated in the 1960s with influences from art music. The first usage of the term, according to Merriam-Webster Online Dictionary, was in 1968. Art rock was a form of music which wanted to "extend the limi... ts of rock & roll", and opted for a more experimental and conceptual outlook on music. Art rock took influences from several genres, notably classical music, yet also jazz in later compositions.Due to its classical influences and experimental nature, art rock has often been used synonymously with progressive rock; nevertheless, there are differences between the genres, with progressive putting a greater emphasis on symphony and melody, whilst the former tends to focus on avant-garde and "novel sonic structure". Art rock, as a term, can also be used to refer to either classically driven rock, or a progressive rock-folk fusion, making it an eclectic genre. Common characteristics of art rock include album-oriented music divided into compositions rather than songs, with usually complicated and long instrumental sections, symphonic orchestration, and an experimental style. Art rock music was traditionally used within the context of concept records, and its lyrical themes tended to be "imaginative", philosophical, and politically oriented   more
0 votes
0 comments
Art rock - Voter Comments
No Comments
Vote & Comment
Leave a comment...
(Maximum 900 words)