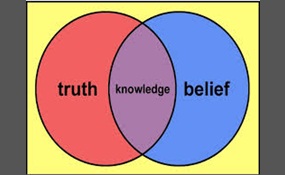 What theory of justification do you agree with most?

Evidentialism is a theory of justification according to which the justification of a conclusion depends solely on the evidence for it. Technically, though belief is typically the primary object of concern, evidentialism can be applied to doxastic at... titudes generally. Formulating evidentialism in terms of the doxastic attitude of belief its most-defended form comes from Conee and Feldman: Belief, B, toward proposition, p, is epistemically justified for Subject, S, at time, t, if and only if B fits the evidence which S has at t   more
1 vote
0 comments
Evidentialism - Voter Comments
No Comments
Vote & Comment
3

Foundationalism concerns philosophical theories of knowledge resting upon justified belief, some secure foundation of certainty. Its main rival is coherentism, whereby a body of knowledge, not requiring a secure foundation, can be established by the...  interlocking strength of its components, like a puzzle solved without prior certainty that each small region was solved correctly.Identifying the other options to be either circular reasoning or infinite regress, thus the regress problem, Aristotle found the clear choice to be foundationalism, which posits basic beliefs underpinning others. Descartes, the most famed foundationalist, discovered a foundation in the fact of his own existence and the "clear and distinct" ideas of reason, whereas Locke saw foundation in experience. A foundation reflects differing epistemological emphases—empiricists emphasizing experience, rationalists emphasizing reason—but may blend both.In the 1930s, debate over foundationalism revived   more
1 vote
1 comment
Foundationalism - Voter Comments

George_DZ says2016-05-10T11:15:22.0779786Z
Report Post
All other theories will result in some form of infinite regression. Foundational axioms might be logical disjunctions that are irrefutable, propositions formed from axiomatic statements, or the negation of contradictions,
Vote & Comment
4

In epistemology, foundherentism is a theory of justification that combines elements from the two rival theories addressing infinite regress, foundationalism prone to arbitrariness, and coherentism prone to circularity. Foundherentism was developed a... nd defended by Susan Haack in Evidence and Inquiry: Towards Reconstruction in Epistemology.In principle, foundationalism holds that basic beliefs unilaterally support derived beliefs, with support always directed from the former to the latter; coherentism holds that beliefs mutually support each other when they belong to the same coherent belief-set. As these theories were refined, however, some foundationalists began to admit that even basic beliefs could be fallible, and that derived beliefs could mutually support each other; whereas some coherentists began to admit that experiential beliefs should be weighted so as to reflect realistic degrees of coherence or justification. So the rival theories began to lean closer together. Moreover, those foundationalists who wondered why there couldn't be mutual support between basic and derived beliefs were in danger of falling into coherentism   more
0 votes
0 comments
Foundherentism - Voter Comments
No Comments
Vote & Comment
7

Infinitism is the view that knowledge may be justified by an infinite chain of reasons. It belongs to epistemology, the branch of philosophy that considers the possibility, nature, and means of knowledge.
0 votes
0 comments
Infinitism - Voter Comments
No Comments
Vote & Comment
8

In contemporary epistemology, internalism about justification is the idea that everything necessary to provide justification for a belief must be immediately available to an agent's consciousness. An internalist about knowledge will likely hold that...  the conditions that distinguish mere true belief from knowledge are similarly internal to the individual's perspective or grounded in the subject's mental states   more
0 votes
0 comments
Internalism - Voter Comments
No Comments
Vote & Comment
9

In the philosophy of religion, reformed epistemology is a school of thought regarding the epistemology of belief in God put forward by a group of Protestant Christian philosophers, most notably, Alvin Plantinga, William Lane Craig, William Alston, N... icholas Wolterstorff and Michael C. Rea. Central to Reformed epistemology is the idea that belief in God is a "properly basic belief": it does not need to be inferred from other truths in order to be reasonable. Since this view represents a continuation of the thinking about the relationship between faith and reason that its founders find in 16th century Reformed theology, particularly in John Calvin's doctrine that God has planted in us a sensus divinitatis, it has come to be known as Reformed epistemology   more
0 votes
0 comments
Reformed epistemology - Voter Comments
No Comments
Vote & Comment
10

Skepticism, as an epistemological argument, poses the question of whether knowledge, in the first place, is possible. Skeptics argue that the belief in something does not necessarily justify an assertion of knowledge of it. In this, skeptics oppose ... dogmatic foundationalism, which states that there have to be some basic positions that are self-justified or beyond justification, without reference to others. (One example of such foundationalism may be found in Spinoza's Ethics.) The skeptical response to this can take several approaches. First, claiming that "basic positions" must exist amounts to the logical fallacy of argument from ignorance combined with the slippery slope   more
0 votes
0 comments
Epistemological Skepticism - Voter Comments
No Comments
Vote & Comment
11

Reliabilism, a category of theories in the philosophical discipline of epistemology, has been advanced as a theory of knowledge, both of justification and of knowledge. Process reliabilism has been used as an argument against philosophical skepticis... m, such as the brain in a vat thought experiment. Process reliabilism is a form of epistemic externalism. A broadly reliabilist theory of knowledge is roughly as follows:One knows that p if and only if p is true, one believes that p is true, and one has arrived at the belief that p through some reliable process.A broadly reliabilist theory of justified belief can be stated as follows:One has a justified belief that p if, and only if, the belief is the result of a reliable process.Moreover, a similar account can be given for such notions as 'warranted belief' or 'epistemically rational belief'.Leading proponents of reliabilist theories of knowledge and justification have included Alvin Goldman, Marshall Swain, Kent Bach and more recently, Alvin Plantinga. Goldman's article "A Causal Theory of Knowing" is generally credited as being the first full treatment of the theory, though D. M   more
0 votes
0 comments
Reliabilism - Voter Comments
No Comments
Vote & Comment
12

In the philosophy of language, semantic externalism is the view that the meaning of a term is determined, in whole or in part, by factors external to the speaker. According to an externalist position, one can claim without contradiction that two spe... akers could be in exactly the same brain state at the time of an utterance, and yet mean different things by that utterance. The philosopher Hilary Putnam has summarized the position with the statement "meanings just ain't in the head!"Although he did not himself use the term "externalism" at the time, Putnam is generally considered to have invented semantic externalism in his 1975 paper "The Meaning of 'Meaning'", and the Twin Earth thought experiment he employed there to argue for the position is frequently cited in arguments over externalism to this day.Externalism is generally thought to be a necessary consequence of any causal theory of reference; since the causal history of a term is not internal, the involvement of that history in determining the term's referent is enough to satisfy the externalist thesis   more
0 votes
0 comments
Semantic externalism - Voter Comments
No Comments
Vote & Comment
14

Phenomenal externalism extends the externalist gist to phenomenal content. Fred Dretske (Dretske 1996) suggested that “The experiences themselves are in the head (why else would closing one's eyes or stopping one's ears extinguish them?), but nothin... g in the head (indeed, at the time one is having the experiences, nothing outside the head) need have the qualities that distinguish these experiences.” So, although experiences remain in the head, their phenomenal content could depend on something elsewhere   more
0 votes
0 comments
Phenomenal externalism - Voter Comments
No Comments
Vote & Comment
Leave a comment...
(Maximum 900 words)