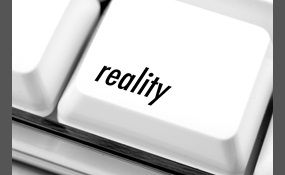 What theory of reality do you believe is most true?

A branch off of the "origin of the universe" poll. Could also mean theory of existence, pretty much the same thing. I am not smart, so please post other theories that I can look up and include.

Eternalism is a philosophical approach to the ontological nature of time, which takes the view that all points in time are equally "real", as opposed to the presentist idea that only the present is real. Modern advocates often take inspiration from ... the way time is modeled as a dimension in the theory of relativity, giving time a similar ontology to that of space. This would mean that time is just another dimension, that future events are "already there", and that there is no objective flow of time. It is sometimes referred to as the "block time" or "block universe" theory due to its description of space-time as an unchanging four-dimensional "block", as opposed to the view of the world as a three-dimensional space modulated by the passage of time   more
9 votes
2 comments
Eternalism - Voter Comments

This is a variant of Solipsism: This theory states that we are currently experiencing a very lucid dream. When we actually dream, there is a chance that our dreams are a piece of the reality that may be currently occurring. There is also a chance th... at everything we do is a dream and when we die we wake up to the real reality. Some think that the dream may only be about you and everyone is figments of your imagination and "reality" is literally your own dream. This means that everything you are seeing right now is created by your own dreaming mind   more
2 votes
1 comment
We are dreaming, or to be more politically correct, you are dreaming - Voter Comments

AdventurerExplorer says2015-05-31T10:41:05.3724628-05:00
Report Post
It could be any of these, Could be reality is objective maybe its not so i guess i can pick favorites here and dreaming seems to be the best. Mostly because of the question, When you wake from this dream where will you wake up? one can only imagine :), Though logically i think the eternalism might be true
Vote & Comment
3

Maybe you are in fact, everything that exists. It’s all you. This is bordering on Buddhist thought actually, that you are one with the universe, but it’s possible. Everything in this world is you, and you are everything. It’s all part of you, even t... hough you’re not aware of the other parts of you, just in the same way that you can’t beat your heart, you just let it beat. Everything is you, and you control it in the same way that you control your own body, some things are done automatically for you, and just as you can’t control the secretion of hormones you can’t control the weather or the lives of others, they’re just part of you and exist in harmony   more
1 vote
1 comment
You are everything - Voter Comments

yetifivepecks says2014-08-06T02:09:30.7434313-05:00
Report Post
In a very real sense, this is true. Human beings are made up the same building blocks as the rest of reality. In this way, we are connected to the Universe and to each other. Then, there is the simple truth of cause and effect. Everything that anyone does will always affect someone or something else. Many scientists hold views similar to this, in the form of a secular pantheism much like that of Spinoza.
Vote & Comment
4

Non-reality simply means that there is no such thing as objective reality. Every possible observation or interpretation is tainted by subjectivity and therefore does not constitute truth. Nothing is real! This is supported by quantum theory, which s... tates that prior to observation, nothing can be said about a physical system. This theory is further backed by the Double Slit Experiment, which suggests our mere observation changes the outcome. This is the most cautious assumption of reality. Thoughts seem the most certain entities to exist, but maybe they only seem to be thoughts. Maybe they do not even exist. Maybe nothing actually exists except the illusion of existence itself   more
1 vote
1 comment
Non-reality - Voter Comments

cludwig says2014-08-05T01:30:14.6633035-05:00
Report Post
I believe that consciousness is delirium. Reality is the mind's effort to create an architecture in which it can exist and create a world of reasoning and comfort. Take the architecture away (which is fantasy), and there is nothing left but isolation, loneliness and utter confusion.
Vote & Comment
5

Brain in the Vat

The “Brain in the Vat” thought-experiment is a problem encountered by philosophers and scientists who propose (like most people) that the external world is independently verifiable.So what’s the problem? Well, let’s imagine for a moment that we are ... merely brains in vats, with our perceptions being manipulated by aliens or evil scientists. How could we possibly know? And how could we disprove the possibility of this situation actually being the case for us right now? Brain-in-vat is a modern spin on Descartes’ Evil Demon problem; it makes the same point—that we can’t prove the existence of anything but our consciousness—but employs slightly different thought-experiments. And if this sounds like the Matrix, that’s because the Matrix was based on this very scenario. Unfortunately, we don’t have any red pills   more
1 vote
1 comment
Brain in the Vat - Voter Comments

“Idealism” is the belief that all things exist as an idea in the mind—or more specifically, as an idea in someone’s mind. George Berkeley, a famous idealist philosopher, found that his views were dismissed as idiotic by some of his peers. It’s said ... that one of his opponents closed his eyes, kicked a stone, and stated: “I refute it thus.” The point was that if the stone really existed only in the man’s mind, he should not have been able to kick it with his eyes closed. Berkeley’s refutation of this was a bit troublesome, especially in modern eyes. He stated that there existed an all-powerful and omnipresent God, who perceived everyone and everything simultaneously. Plausible or not? You decide   more
1 vote
0 comments
Idealism (Berkeley's Theory of Reality) - Voter Comments
No Comments
Vote & Comment
7

Presentism is the philosophical doctrine that only events and entities—and, in some versions of presentism, timeless objects or ideas like numbers and sets—that occur in the present exist. According to presentism, events and entities that are wholly...  past or wholly future do not exist at all. Presentism contrasts with eternalism and the growing block theory of time, both of which hold that past events, like the Battle of Waterloo, and past entities, like Alexander the Great's warhorse Bucephalus, really do exist, though not in the present; eternalism alone extends this to future events as well.Saint Augustine proposed that the present is a knife edge between the past and the future and could not contain any extended period of time. This seems evident because, if the present is extended, it must have separate parts – but these must be simultaneous if they are truly part of the present. According to early philosophers, time cannot be both past and simultaneously present, so it is not extended. Contrary to Saint Augustine, some philosophers propose that conscious experience is extended in time   more
1 vote
1 comment
Presentism - Voter Comments

Phenomenalism is the view that physical objects cannot justifiably be said to exist in themselves, but only as perceptual phenomena or sensory stimuli situated in time and in space. In particular, some forms of phenomenalism reduce talk about physic... al objects in the external world to talk about bundles of sense-data   more
0 votes
0 comments
Phenomenalism - Voter Comments
No Comments
Vote & Comment
9

Solipsism is a philosophical theory which states that nothing can be verified except the existence of one’s own mind. This seems silly at first; and who, after all, would wish to deny that the world around them exists? The only problem is that it’s ... impossible to verify the existence of anything except your own consciousness. Take a moment to remember all the plausible dreams you've ever had in your life. Couldn't it be possible that what you see around you is nothing but an incredibly elaborate dream? But we have friends and family whose existence we can verify, simply by touching them, right? Wrong. People on LSD, for example, sometimes report seeing (and touching) the most convincing hallucinations—yet we don’t assume that their illusions are real. So what can we verify, then? Well, not even the chicken drumstick we had for dinner, nor the keyboards at our fingers; only our own thoughts can be proven by each one of us to exist   more
0 votes
0 comments
Solipsism - Voter Comments
No Comments
Vote & Comment
Leave a comment...
(Maximum 900 words)