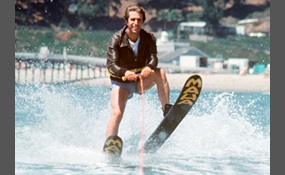 What TV series "jumped the shark" the worst?

You can add answers. I added mostly comedies because personally I find comedies jump the shark more frequently than dramas.

Glee is an American musical comedy-drama television series that airs on the Fox network in the United States. It focuses on the fictitious William McKinley High School glee club, New Directions, which competes on the show choir competition circuit w... hile its disparate members deal with relationships, sexuality, social issues, and learning to become an effective team. The initial twelve-member cast included club director and Spanish teacher Will Schuester, cheerleading coach Sue Sylvester, guidance counselor Emma Pillsbury, Will's wife Terri, and eight club members played by Dianna Agron, Chris Colfer, Kevin McHale, Lea Michele, Cory Monteith, Amber Riley, Mark Salling, and Jenna Ushkowitz. In subsequent seasons, the main cast has expanded to fourteen and fifteen members.The series was created by Ryan Murphy, Brad Falchuk, and Ian Brennan, the last of whom first conceived of Glee as a film. The three wrote all of the show's episodes for the first two seasons, and Murphy and Falchuk initially served as the show's main directors. The pilot episode was broadcast on May 19, 2009, and the first season aired from September 9, 2009, to June 8, 2010   more
4 votes
1 comment
Glee - Voter Comments

Family Guy is an American adult animated sitcom created by Seth MacFarlane for the Fox Broadcasting Company. The series centers on the Griffins, a family consisting of parents Peter and Lois; their children Meg, Chris, and Stewie; and their anthropo... morphic pet dog Brian. The show is set in the fictional city of Quahog, Rhode Island, and exhibits much of its humor in the form of cutaway gags that often lampoon American culture.The family was conceived by MacFarlane after developing two animated films, The Life of Larry and Larry & Steve. MacFarlane redesigned the films' protagonist, Larry, and his dog, Steve, and renamed them Peter and Brian, respectively. MacFarlane pitched a seven-minute pilot to Fox on May 15, 1998. The show was given the green light and started production. Shortly after the third season of Family Guy had aired in 2001, Fox canceled the series, putting the series to a 2-year hiatus. However, favorable DVD sales and high ratings for syndicated reruns on Adult Swim convinced the network to renew the show in 2004 for a 4th season, which began airing on May 1, 2005   more
2 votes
0 comments
Family Guy - Voter Comments
No Comments
Vote & Comment
3

How I Met Your Mother

How I Met Your Mother is an American sitcom that originally ran on CBS from September 19, 2005 to March 31, 2014. The series follows the main character, Ted Mosby, and his group of friends in Manhattan. As a framing device, Ted, in the year 2030, re... counts to his son and daughter the events that led him to meeting their mother.The show was created by Craig Thomas and Carter Bays, who also served as the show's executive producers and were frequent writers. The series was loosely inspired by their friendship when they both lived in New York City. Among the 208 episodes, there were only four directors: Pamela Fryman, Rob Greenberg, Michael Shea, and Neil Patrick Harris.Known for its unique structure and eccentric humor, How I Met Your Mother has gained a cult following over the years. The show initially received positive reviews, with the later seasons receiving more mixed reviews. The show was nominated for 28 Emmy Awards, winning nine. In 2010, Alyson Hannigan won the People's Choice Award for Favorite TV Comedy Actress   more
0 votes
0 comments
How I Met Your Mother - Voter Comments
No Comments
Vote & Comment
8