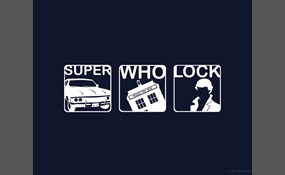 What TV show is the best

Supernatural is an American television series, created by Eric Kripke, which was first broadcast on September 13, 2005, on The WB, and subsequently became part of successor The CW's lineup. Starring Jared Padalecki as Sam Winchester and Jensen Ackle... s as Dean Winchester, the series follows the two brothers as they hunt demons, ghosts, monsters and other supernatural beings in the world. The series is produced by Warner Bros. Television, in association with Wonderland Sound and Vision. The current executive producers are Eric Kripke, McG, and Robert Singer. Former executive producer Kim Manners died of lung cancer during production of the fourth season.This series is filmed in Vancouver, British Columbia and surrounding areas, and was in development for nearly ten years, as creator Kripke spent several years unsuccessfully pitching it. The pilot was viewed by an estimated 5.69 million viewers, and the ratings of the first four episodes prompted The WB to pick up the series for a full season. Originally, Kripke planned the series for three seasons, but later expanded it to five. The fifth season began airing on September 10, 2009, and concluded the series' main storyline; however, The CW officially renewed the show for a sixth season on February 16, 2010. On April 26, 2011, the show was renewed for a seventh season for the 2011–2012 season, which began on September 23, 2011. On May 3, 2012, Supernatural was renewed for an eighth season by The CW with Jeremy Carver replacing Sera Gamble as co-showrunner with Robert Singer. On February 11, 2013, The CW renewed the series for a ninth season. It premiered on October 8, 2013. On July 22, 2013 The CW announced there was a spin-off of Supernatural in the works, with the 20th episode of season nine serving as a back-door pilot. On January 29, 2014, it was revealed that the spin-off will be titled Supernatural: Bloodlines   more
7 votes
0 comments
Supernatural - Voter Comments
No Comments
Vote & Comment
2

Doctor Who is a British science-fiction television programme produced by the BBC. The programme depicts the adventures of the Doctor, a Time Lord—a time-travelling humanoid alien. He explores the universe in his TARDIS, a sentient time-travelling sp... ace ship. Its exterior appears as a blue British police box, which was a common sight in Britain in 1963 when the series first aired. Along with a succession of companions, the Doctor faces a variety of foes while working to save civilisations, help ordinary people, and right wrongs.The show has received recognition as one of Britain's finest television programmes, winning the 2006 British Academy Television Award for Best Drama Series and five consecutive awards at the National Television Awards during Russell T Davies's tenure as executive producer. In 2011, Matt Smith became the first Doctor to be nominated for a BAFTA Television Award for Best Actor. In 2013, the Peabody Awards honoured Doctor Who with an Institutional Peabody "for evolving with technology and the times like nothing else in the known television universe." The programme is listed in Guinness World Records as the longest-running science fiction television show in the world, the "most successful" science fiction series of all time—based on its over-all broadcast ratings, DVD and book sales, and iTunes traffic— and for the largest ever simulcast of a TV drama with its 50th anniversary special. During its original run, it was recognised for its imaginative stories, creative low-budget special effects, and pioneering use of electronic music   more
7 votes
0 comments
Doctor Who - Voter Comments
No Comments
Vote & Comment
3

Sherlock is a British television crime drama that presents a contemporary adaptation of Sir Arthur Conan Doyle's Sherlock Holmes detective stories. Created by Steven Moffat and Mark Gatiss, it stars Benedict Cumberbatch as Sherlock Holmes and Martin...  Freeman as Doctor John Watson. Nine episodes have been produced, the first three of which aired in 2010. Series two aired in 2012, and a third series aired in 2014. The third series has become the UK's most watched drama series since 2001. Sherlock has been sold to over 200 territories.Sherlock depicts "consulting detective" Holmes, assisting the Metropolitan Police Service, primarily Detective Inspector Greg Lestrade, in solving various crimes. Holmes is assisted by his flatmate, Dr John Watson, who has returned from military service in Afghanistan. Although the series depicts a variety of crimes and perpetrators, Holmes' conflict with his archnemesis Jim Moriarty is a recurring feature. Molly Hooper, a pathologist at St. Bart's Hospital occasionally assists Holmes in his cases. Other recurring roles include Una Stubbs as Mrs Hudson, Holmes and Watson's landlady; and co-creator Mark Gatiss as Sherlock's brother, Mycroft Holmes. Sue Vertue and Elaine Cameron of Hartswood Films produced the series for the BBC and co-produced it with WGBH Boston for its Masterpiece anthology series on PBS. The series is primarily filmed in Cardiff, Wales. North Gower Street in London is used for exterior shots of Holmes and Watson's 221B Baker Street residence. In January 2014, executive producer Steven Moffat has announced that a fourth series has been commissioned, with scripts being planned   more
2 votes
0 comments
Sherlock - Voter Comments
No Comments
Vote & Comment
4

Teen Wolf is an American television series developed by Jeff Davis for MTV. It is loosely based on the 1985 film of the same name. The show's central character is Scott McCall, a high school student and social outcast who is bitten by a werewolf whi... le looking for a dead girl in the woods. Scott attempts to maintain a normal life, keeping the fact of his being a werewolf secret from everyone, with the exception of his best friend "Stiles" Stilinski, who helps him through the changes in his life and body, and another mysterious werewolf, Derek Hale.Teen Wolf premiered on June 5, 2011, following the 2011 MTV Movie Awards. The second season premiered on June 3, 2012 after 2012 MTV Movie Awards. On July 12, 2012, Teen Wolf was renewed for a third season, which includes 24 episodes and the production location was moved to Los Angeles, California. The third season premiered on June 3, 2013 at 10 pm, giving the series a new high on ratings. A fourth season has been confirmed, which will premiere on June 23rd, 2014. The series has received a generally positive response from critics   more
1 vote
0 comments
Teen Wolf - Voter Comments
No Comments
Vote & Comment
No comments yet.
Leave a comment...
(Maximum 900 words)
Privacy Policy | Terms of Use
Sitemap | View Desktop Version
©2021 Debate.org. All rights reserved.