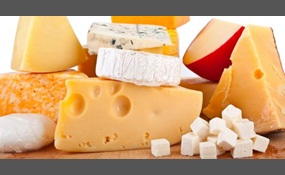 What type of cheese is the best?

Cheddar cheese is a relatively hard, pale-yellow-to-off-white, sometimes "sharp"-tasting, natural cheese. Originating in the English village of Cheddar in Somerset, cheeses of this style are produced beyond this region and in several countries aroun... d the world.Cheddar is the most popular type of cheese in the UK, accounting for 51 percent of the country's £1.9 billion annual cheese market. It is also the second-most-popular cheese in the U.S.A., with an average annual consumption of 10 lb per capita. The United States produced 3,233,380,000 lb in 2010, and the UK 258,000 long tons in 2008. The term "cheddar cheese" is widely used, but has no Protected Designation of Origin within the European Union. However, only cheddar produced from local milk within four counties of South West England may use the name "West Country Farmhouse Cheddar". Cheddar produced in Orkney is registered as protected geographical indication under the name "Orkney Scottish Island Cheddar"   more
5 votes
2 comments
Cheddar cheese - Voter Comments

Mozzarella is a cheese, originally from southern Italy, traditionally made from Italian buffalo milk by the pasta filata method.If cow's milk is used the name is "Fior di latte" . The term is wrongly used for several kinds of Italian cheeses that ar... e made using spinning and then cutting. The only one called rightly "Mozzarella" is the one made from domesticated Italian buffalo's milk in Italy and from other types of buffalo's milk in many nations. In almost all cases Italian breeders or entrepreneurs are the ones who have initiated production in other countries.Mozzarella received a Traditional Specialities Guaranteed certification from the European Union in 1998. This protection scheme requires that mozzarella sold in the European Union is produced according to a traditional recipe. The TSG certification does not specify the source of the milk, so any type of milk can be used. In Italy mozzarella made with the milk of the Italian water buffalo is an important variety   more
5 votes
0 comments
Mozzarella - Voter Comments
No Comments
Vote & Comment
3

Swiss cheese is a generic name in North America for several related varieties of cheese, mainly of North American manufacture, which resemble Emmental cheese, a yellow, medium-hard cheese that originated in the area around Emmental, in Switzerland. ... Some types of Swiss cheese have a distinctive appearance, as the blocks of the cheese are riddled with holes known as "eyes". Swiss cheese without eyes is known as "blind"   more
1 vote
1 comment
Swiss cheese - Voter Comments

American cheese is a type of processed cheese. It can be orange, yellow, or white in color, is mild and faintly sweet in flavor, has a medium-firm consistency, and has a very low melting point.Very early in its history, American cheese was only whit... e in color—as it was made from a blend of cheeses which were originally only white. However, the later versions are often a yellow hue due to the addition of annatto, a sweet and nutty seasoning added to Cheddar and to Colby so that by the late 1800's American cheese was often simply called "yellow cheese."Today’s American cheese is generally manufactured from ingredients such as one or more cheeses, milk, whey, milkfat, milk protein concentrate, whey protein concentrate, saturated oil, emulsifiers, and salt. Because its manufacturing process differs from "unprocessed"/raw/natural cheeses, American cheese can not be legally sold under the name "cheese" in the US. Instead, federal laws mandate that it be labeled as "processed cheese" if simply made from combining more than one cheese, or "cheese food" if dairy ingredients such as cream, milk, skim milk, buttermilk, cheese whey, or albumin from cheese whey are added   more
1 vote
1 comment
American cheese - Voter Comments