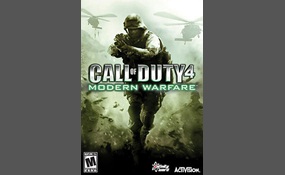 What was the best call of duty?

Call of Duty: Black Ops is a 2010 first-person shooter video game. The game was developed by Treyarch, published by Activision, and released worldwide on November 9, 2010 for Microsoft Windows, Xbox 360, PlayStation 3, and Wii consoles, with a separ... ate version for Nintendo DS developed by n-Space. Announced on April 30, 2010, the game is the seventh installment of the Call of Duty series. It is also the first to be set in the Cold War and the fifth to be set in World War II. It is the third in the series to be developed by Treyarch, and is connected to the developer's Call of Duty: World at War.Within 24 hours of going on sale, the game had sold more than 5.6 million copies, 4.2 million in the U.S. and 1.4 million in the UK, breaking the record set by its predecessor Modern Warfare 2 by some 2.3 million copies. Capcom released a subtitled version in Japan on November 18, 2010 and later a Japanese-dubbed version on December 16, 2010. After six weeks on release, Activision reported that Black Ops had exceeded $1 billion in sales. On August 3, 2011, Activision confirmed that the game had sold over 25 million copies worldwide, making it one of the best-selling games of all time in the US, UK and Europe. A sequel, Call of Duty: Black Ops II, was released on November 13, 2012   more
3 votes
0 comments
Call of Duty: Black Ops - Voter Comments
No Comments
Vote & Comment
2

Call of Duty 4: Modern Warfare is a 2007 first-person shooter video game, developed by Infinity Ward and published by Activision for Microsoft Windows, Mac OS X, PlayStation 3, Xbox 360 and Wii. A handheld game was made for the Nintendo DS. The game...  was released in North America, Australia, and Europe in November 2007 for video game consoles and Microsoft Windows. It was released for the Mac in September 2008, then released for the Wii in November 2009, given the subtitle Reflex Edition. It is the fourth installment in the Call of Duty video game series, excluding expansion packs, and is the first in the Modern Warfare line of the franchise, followed by a direct sequel, Call of Duty: Modern Warfare 2 as well as the first game in the series to have a Mature rating. The game breaks away from the World War II setting of previous games in the series and is instead set in modern times. Developed for over two years, the game uses a proprietary game engine. On September 10, 2009, it was re-released in Japan by Square Enix.The story takes place in the year 2011, where a radical leader has executed the president of an unnamed country in the Middle East, and an ultranationalist movement starts a civil war in Russia. The conflicts are seen from the perspectives of a U.S. Force Reconnaissance Marine and a British SAS commando, and are set in various locales, such as the United Kingdom, the Middle East, Azerbaijan, Russia, and Ukraine. The multiplayer portion of the game features various game modes, and contains a leveling system that allows the player to unlock additional weapons, weapon attachments, and camouflage schemes as they advance   more
2 votes
0 comments
Call of Duty 4: Modern Warfare - Voter Comments
No Comments
Vote & Comment
4

Call of Duty 2 is a 2005 first-person shooter video game, the second installment in the critically acclaimed Call of Duty series. It was developed by Activision and published by Konami in Japan and Activision in the rest of the world. The game was r... eleased on October 25, 2005 for Microsoft Windows PCs and on November 22, 2005 as a launch game for the Xbox 360 in Europe, Australia and South America, and later in Japan. Other versions were released on other platforms, including mobile phones as well as Pocket PCs.The game is set during World War II and the campaign mode is experienced through the perspectives of four soldiers: one in the Red Army, one in the United States Army, and two in the British Army. It contains four individual campaigns, split into three stories, with a total of twenty-seven missions. Activision officially announced the game on April 7, 2005 in a press release. Many features were added and changed from the original Call of Duty. The most notable change is the regenerating health. Additions include an icon that indicates a nearby grenade about to explode.The game was met with positive reception. Critics praised the game particularly for the graphics, sound and the regenerating health system. The Xbox 360 version sold over 250,000 copies in its first week, and had sold 2 million copies by January 2008   more
2 votes
0 comments
Call of Duty 2 - Voter Comments
No Comments
Vote & Comment
5

Call of Duty: Modern Warfare 3 is a 2011 first-person shooter video game, developed by Infinity Ward and Sledgehammer Games, with Raven Software having assisted in development and published by Activision. It is the third installment in the Modern Wa... rfare saga, a direct sequel to 2009's Call of Duty: Modern Warfare 2, and the eighth Call of Duty installment.The game was released on November 8, 2011 in North America on Microsoft Windows, Xbox 360, PlayStation 3, and Wii, with a separate version for Nintendo DS developed by n-Space. In Australia, the Wii version was released on November 23, 2011. In Japan, Square Enix handled the installment with a separate subtitled and dubbed version, as they did for Call of Duty: Black Ops, released November 17, 2011 and December 22, 2011 respectively. Within 24 hours of going on sale, the game sold 6.5 million copies in the U.S. and UK alone and grossed $400 million, making it the biggest entertainment launch of all time, until it was surpassed by its sequel, Call of Duty: Black Ops II in November 2012 with $500 million. As of November 5, 2013, Modern Warfare 3 has sold 26.5 million copies.It was the last Call of Duty game to be released on Wii. It was also the last Call of Duty PC game to support Windows XP   more
2 votes
0 comments
Call of Duty: Modern Warfare 3 - Voter Comments
No Comments
Vote & Comment
6

Call of Duty: World at War

Call of Duty: World at War is a 2008 first-person shooter video game developed by Treyarch and published by Activision Blizzard for PC, PlayStation 3, Wii, and Xbox 360. It is generally considered to be the fifth mainstream game of the Call of Duty ... series and returns the setting to World War II. The game was released in North America on November 11, 2008, and in Europe on November 14, 2008. A Windows Mobile version was also made available by Glu Mobile and different storyline versions for the Nintendo DS and PlayStation 2 were also produced, but remain in the World War II setting. The game is based on an enhanced version of the Call of Duty 4: Modern Warfare game engine developed by Infinity Ward with increased development on audio and visual effects.The narrative for the Microsoft Windows, PlayStation 3, Wii, and Xbox 360 versions focuses on the Pacific Theater and Eastern Front theaters of World War II, involving the United States, the Empire of Japan, the Soviet Union, and Nazi Germany. It is told from the perspectives of Marine Raider Private C. Miller, US Navy Petty Officer Locke and Red Army soldier Private Dimitri Petrenko and is based on several historical battles. The multiplayer component of the game contains various game modes and a leveling system that allows the player to unlock additional weapons and rewards as they progress, similar to Call of Duty 4. The game also contains downloadable content called "map packs", which can be purchased online. A new feature to the series was the addition of a cooperative mode, which supports up to two players locally and four players online   more
1 vote
1 comment
Call of Duty: World at War - Voter Comments

Call of Duty: Black Ops II is a 2012 first-person shooter video game, developed by Treyarch and published by Activision. It was released on November 13, 2012 for PlayStation 3, Xbox 360, and Microsoft Windows and on November 18, 2012 in North Americ... a, November 30, 2012 in Europe and Australia for the Wii U. Square Enix released the game for the Japanese market on November 22, 2012 as a subbed version. A Japanese voice-dubbed version was released separately on December 20, 2012.The Japanese release of the Wii U port is only the dubbed version since the console was not available in Japan in November. Black Ops II is the ninth game in the Call of Duty franchise of video games and a sequel to the 2010 game Call of Duty: Black Ops. The game was launched at 16,000 stores worldwide at midnight on November 13, 2012.Black Ops II is the first game in the Call of Duty franchise to feature future warfare technology and the first to present branching storylines driven by player choice as well as selecting weapons before starting story mode missions. It also offers a 3D display option. A corresponding game, Call of Duty: Black Ops – Declassified, was released simultaneously on the PlayStation Vita. Within 24 hours of going on sale, the game grossed over $500 million. It had remained the largest entertainment launch of all time until September 2013, when Take-Two announced that Grand Theft Auto V had grossed $800 million in its first day of release. It went on to sell 7.5 million copies in the U.S. in November 2012, making it the highest grossing game of the month. As of November 5, 2013, the game has sold 24.2 million copies   more
1 vote
0 comments
Call of Duty: Black Ops II - Voter Comments
No Comments
Vote & Comment
8

Call of Duty: Ghosts is a 2013 first-person shooter video game developed by Infinity Ward, with assistance from Raven Software, Neversoft and Certain Affinity. Published by Activision, it is the tenth primary installment in the Call of Duty series a... nd the sixth developed by Infinity Ward. The video game was released for Microsoft Windows, PlayStation 3, Xbox 360, and Wii U on November 5, 2013, with Treyarch handling the port for the Wii U. The game was released with the launch of next-generation consoles PlayStation 4 and Xbox One.According to review score aggregator Metacritic, Ghosts received "generally favorable" reviews from critics, with most praising its multiplayer gameplay and introduction of the new game mode Extinction. It was criticized, however, for its single-player campaign, rehashing of familiar concepts, and general lack of innovation. Call of Duty: Ghosts has sold over 19 million units worldwide, and was the second best-selling game of 2013 behind Grand Theft Auto V   more
0 votes
0 comments
Call of Duty: Ghosts - Voter Comments
No Comments
Vote & Comment
9

Call of Duty is a 2003 first-person shooter video game developed by Infinity Ward and published by Activision. The game simulates the infantry and combined arms warfare of World War II. The game is based on the Quake III: Team Arena engine. It was a... ccompanied in September 2004 by an expansion pack, Call of Duty: United Offensive, which was produced by Activision, and developed by Gray Matter Interactive, with contributions from Pi Studios. Call of Duty is similar in theme and gameplay to Medal of Honor, as it is made out of single-player campaigns and missions. However, unlike Medal of Honor, the war is seen not just from the viewpoint of an American soldier but also from the viewpoint of British, Canadian, and Soviet soldiers.The game was somewhat unusual at the time in that throughout the single-player mode the player is joined by computer-controlled allies who range in quantity from two infantrymen to an entire regiment of tanks. The computer-controlled allies will support the actual player during the missions. They also further the game's goal of providing an immersive and realistic experience; that is, soldiers in World War II were usually part of a larger group, as opposed to the "lone wolf" seen in video games such as Medal of Honor. However, there are some missions where the player is alone   more
0 votes
0 comments
Call of Duty - Voter Comments
No Comments
Vote & Comment
10