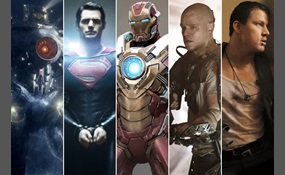 What was your favorite movie this summer?

Iron Man 3 is a 2013 American superhero film featuring the Marvel Comics character Iron Man, produced by Kevin Feige of Marvel Studios and distributed by Walt Disney Studios Motion Pictures. It is the sequel to 2008's Iron Man and 2010's Iron Man 2,...  and the seventh installment in the Marvel Cinematic Universe, being the first major release in the franchise since the crossover film The Avengers. Shane Black directed a screenplay he co-wrote with Drew Pearce and which uses concepts from the "Extremis" story arc by Warren Ellis. Robert Downey, Jr. Reprises his role as the title character, with Gwyneth Paltrow and Don Cheadle reprising their roles as Pepper Potts and James Rhodes, respectively. Jon Favreau, who directed the first two films, serves as an executive producer and reprises his role as Happy Hogan. Guy Pearce, Rebecca Hall, Stephanie Szostak, James Badge Dale, and Ben Kingsley round out the film's principal cast.After the release of Iron Man 2 in May 2010, Favreau decided not to return as director, and in February 2011 Black was hired to rewrite and direct the film. Throughout April and May 2012, the film's supporting cast was filled out, with Kingsley, Pearce, and Hall brought in to portray key roles. Filming began on May 23, 2012 in Wilmington, North Carolina. The film was shot primarily in North Carolina, with additional shooting in Florida, China and Los Angeles. The film's visual effects were handled by 17 companies, including Scanline VFX, Digital Domain, and Weta Digital   more
77 votes
8 comments
Iron Man 3 - Voter Comments

World War Z is a 2013 British-American apocalyptic film directed by Marc Forster. The screenplay by Matthew Michael Carnahan is based on the 2006 novel of the same name by Max Brooks. The film stars Brad Pitt as Gerry Lane, a former United Nations i... nvestigator who must travel the world to find a way to stop a zombie-like pandemic.Pitt's Plan B Entertainment secured the film rights in 2007 and Forster was approached to direct. In 2009, Carnahan was hired to rewrite the script to the film. Filming began in July 2011 in Malta on an estimated $125 million budget, before moving to Glasgow in August 2011 and Budapest in October 2011. Originally set for a December 2012 release, the production suffered some setbacks. In June 2012, the film's release date was pushed back and the crew returned to Budapest for seven weeks of additional shooting. Damon Lindelof was hired to rewrite the third act, but did not have the time to finish the script and Drew Goddard was hired to rewrite it. The reshoots took place between September and October 2012.World War Z premiered in London on June 2, 2013 and was chosen to open the 35th Moscow International Film Festival. The film was released on June 21, 2013 in the United States in 2D and RealD 3D. The film received a positive reaction from critics and was a commercial success, grossing over $500 million on a $190 million budget. A sequel, cancelled during the film's troubled filming process, is now in development once again   more
27 votes
3 comments
World War Z - Voter Comments

tennistanner says2014-02-17T21:32:26.5360174-06:00
Report Post
Man of Steel was able to play both the role of the stereotypical superhero film and the more grounded Dark Knight-esque superhero film. As well as presenting some of the finest action pieces ever devised on film, it made us reconcile on what it means to be human and how far we'd go to strive towards an ideal.

Schizoidmouse says2014-11-24T04:38:06.7010468-06:00
Report Post
Best of the bunch, Man of Steel is the obvious winner. Great Gatsby I neglected to see since the original adaptation didn't do the book justice for me and I can't see another doing it better. World War Z, again didn't want to see it at all. Iron Man 3 for me was the worst film but I digress, the only choice was the controversial Man of Steel. Despite the advertising up the wazoo I found this movie really enjoyable reinventing the Superman we know and love. I even loved Micheal Shannon's Zod, I felt he commanded a lot of respect and the performance did Terrance Stamp proud.
Vote & Comment
4

The Great Gatsby is a 2013 Australian-American 3D drama film. An adaptation of F. Scott Fitzgerald's 1925 novel of the same name, the film was co-written and directed by Baz Luhrmann, and stars Leonardo DiCaprio, Tobey Maguire, Carey Mulligan, Joel ... Edgerton, Elizabeth Debicki, Isla Fisher and Jason Clarke. It follows the life and times of millionaire Jay Gatsby and his neighbor Nick, who recounts his encounter with Gatsby at the height of the Roaring Twenties. The film was originally going to be released on December 25, 2012, but moved to May 10, 2013 in 3D. It received mixed reviews from critics. The government of Australia contributed financially to the making of the film with tax subsidies   more
9 votes
0 comments
The Great Gatsby - Voter Comments
No Comments
Vote & Comment
Leave a comment...
(Maximum 900 words)