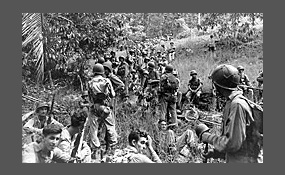 What was the greatest Japanese victory in the Pacific War

Jifpop09 says2014-04-04T23:29:01.2850667-05:00
Report Post
I know most people will say Pearl Harbor, but the truth is, that the Japanese victory in Bataan was stunning. They pushed through 5 US defensive lines and pushed us out, with very few casualties. The COP would of been a very important operations and firing platform. We lost about 120,000 US and Philippine-American soldiers in that battle alone.
Vote & Comment
2

The Battle of Wake Island began simultaneously with the Attack on Pearl Harbor and ended on 23 December 1941, with the surrender of the American forces to the Empire of Japan. It was fought on and around the atoll formed by Wake Island and its islet... s of Peale and Wilkes Islands by the air, land and naval forces of the Empire of Japan against those of the U.S., with Marines playing a prominent role on both sides.The island was held by the Japanese for the duration of the Pacific War; the remaining Japanese garrison on the island surrendered to a detachment of United States Marines on 4 September 1945   more
1 vote
0 comments
Battle of Wake Island - Voter Comments
No Comments
Vote & Comment
6

conservativelogic says2014-04-07T15:25:18.4775870-05:00
Report Post
How can you not have the battle of Singapore? In that battle, the Japanese defeated a British army far larger than theirs and gained control of a strategic port. Not only did the Japanese take the well-fortified island from a larger enemy army, they did it with few casualties.