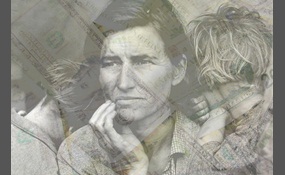 What was the main cause of the Great Depression?

What caused the Great Depression?

This theory was primarily proposed by John Maynard Keynes and argues that the because the economy during the Roaring Twenties was left unchecked, the stock market crashed after much speculation and excessive growth. FDR's New Deal (1933-39) pulled t... he country out of it while Herbert Hoover (1929-1933) stood idle. The most popular leader of this interpretation today is Paul Krugman   more
9 votes
3 comments
The Unregulated Free Market Economy - Voter Comments

SweetTea says2014-06-14T06:01:04.8150422-05:00
Report Post
If you look at history, every time regulations are drastically reduced or eliminated, we have an economic collapse, i.e. recession, Great Depression, Great Recession, etc.

campbellp10 says2014-06-27T20:56:08.3543333-05:00
Report Post
Indeed I believe this was the largest cause, but certainly wasn't the only cause. There are many factors that contribute to a crash that big, including all of the other options listed. I just think this was the main one. Along with fallout from WWI.
Vote & Comment
2

This theory is most popular among the Austrian school of economics proponents like F. A. Hayek. Rather than the natural cycle of booms and busts the monetarists believe in, Austrians believe this is not natural and is caused by the Fed's manipulatio... n of interest rates. They argued the easy money policies during the Twenties caused the crash and interventions in wages, prices, and taxes by both Hoover and FDR made the situation worse. The most popular leaders of this interpretation are Ron Paul and Peter Schiff   more
3 votes
0 comments
Fed's Easy Credit during 1920s - Voter Comments
No Comments
Vote & Comment
4

Fed's Contraction of the Money Supply

This theory was primarily proposed by the monetarist economist Milton Friedman. This terry argues that the a Federal Reserve reduced the money supply when it should have expanded it. Because the economy was not inflated enough (1930-31) the economy ... collapsed from what could have been a simple downturn when the Fed cut the supply (1932). FDR's New Deal was not as successful as people thought. The most popular leader of this interpretation today is Ben Bernanke   more
1 vote
0 comments
Fed's Contraction of the Money Supply - Voter Comments
No Comments
Vote & Comment
No comments yet.
Leave a comment...
(Maximum 900 words)
Privacy Policy | Terms of Use
Sitemap | View Desktop Version
©2021 Debate.org. All rights reserved.