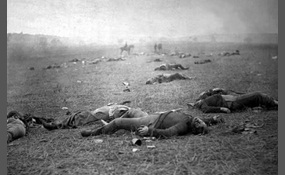 What was the most important Civil War battle?

The last major Confederate town on the Mississippi falls to the Union.
0 votes
0 comments
Battle of Vicksburg - Voter Comments
No Comments
Vote & Comment
5

Proved that the war would not be easy for either side and would be very long.
0 votes
0 comments
First Battle of Bull Run - Voter Comments
No Comments
Vote & Comment
Leave a comment...
(Maximum 900 words)

SweetTea says2014-06-26T17:27:41.5446818-05:00
Report Post
Battle of Chancellorsville ... Stonewall Jackson (the brains of the Confederate Army) was wounded there & died a week later. Lee was left to do his own battle planning & he wasn't worth a darn at strategy. If you look at history, everything pretty much went downhill after Chancellorsville.
Privacy Policy | Terms of Use
Sitemap | View Desktop Version
©2021 Debate.org. All rights reserved.