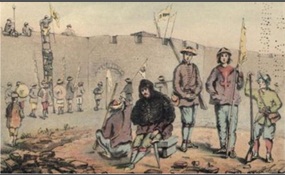 What was the primary cause of the Taiping Rebellion?

Among the 10 most devastating wars in history, almost half of them consist of Chinese civil wars.

A religion is an organized collection of beliefs, cultural systems, and world views that relate humanity to an order of existence. Many religions have narratives, symbols, and sacred histories that are intended to explain the meaning of life and/or ... to explain the origin of life or the Universe. From their beliefs about the cosmos and human nature, people derive morality, ethics, religious laws or a preferred lifestyle. According to some estimates, there are roughly 4,200 religions in the world.Many religions may have organized behaviors, clergy, a definition of what constitutes adherence or membership, holy places, and scriptures. The practice of a religion may also include rituals, sermons, commemoration or veneration of a deity, gods or goddesses, sacrifices, festivals, feasts, trance, initiations, funerary services, matrimonial services, meditation, prayer, music, art, dance, public service or other aspects of human culture. Religions may also contain mythology   more
1 vote
0 comments
Religion - Voter Comments
No Comments
Vote & Comment
3

A dissatisfaction with the Qing Dynasty