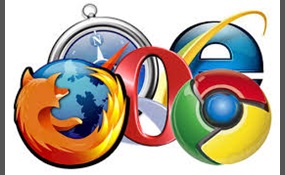 What web browser do you use?

Google Chrome is a freeware web browser developed by Google that uses the WebKit layout engine until version 27 and, with the exception of its iOS releases, from version 28 and beyond the WebKit fork Blink. It was released as a beta version for Micr... osoft Windows on September 2, 2008, and as a stable public release on December 11, 2008.Net Applications has indicated that Chrome is the third-most popular web browser when it comes to the size of its user base, behind Internet Explorer and Firefox. StatCounter, however, estimates that Google Chrome has a 39% worldwide usage share of web browsers making it the most widely used web browser in the world.In September 2008, Google released the majority of Chrome's source code as an open source project called Chromium, on which Chrome releases are still based   more
22 votes
5 comments
Google Chrome - Voter Comments

Internet Explorer is a series of graphical web browsers developed by Microsoft and included as part of the Microsoft Windows line of operating systems, starting in 1995. It was first released as part of the add-on package Plus! For Windows 95 that y... ear. Later versions were available as free downloads, or in service packs, and included in the OEM service releases of Windows 95 and later versions of Windows.Internet Explorer is one of the most widely used web browsers, attaining a peak of about 95% usage share during 2002 and 2003. Its usage share has since declined with the launch of Safari, Firefox, and Google Chrome, each of which now has significant market share. Estimates for Internet Explorer's overall market share range from 27.4% to 54.13%, as of October 2012. Microsoft spent over US$100 million per year on Internet Explorer in the late 1990s, with over 1000 people working on it by 1999.Since its first release, Microsoft has added features and technologies such as basic table display; XMLHttpRequest, which aids creation of dynamic web pages; and Internationalized Domain Names, which allow Web sites to have native-language addresses with non-Latin characters. The browser has also received scrutiny throughout its development for use of third-party technology and security and privacy vulnerabilities, and both the United States and the European Union have alleged that integration of Internet Explorer with Windows has been to the detriment of other browsers   more
3 votes
2 comments
Internet Explorer - Voter Comments

Mozilla Firefox is a free and open source web browser developed for Windows, OS X and Linux, with a mobile version for Android, by Mozilla Foundation and its subsidiary, the Mozilla Corporation. Firefox uses the Gecko layout engine to render web pag... es, which implements current and anticipated web standards.As of July 2013, Firefox has approximately 16% to 21% of worldwide usage share of web browsers, making it the third most used web browser, according to different sources. According to Mozilla, Firefox counts over 450 million users around the world. The browser has had particular success in Indonesia, Germany, and Poland, where it is the most popular browser with 57%, 45%, and 44% of the market share, respectively   more
3 votes
1 comment
Firefox - Voter Comments

vortux says2013-09-10T15:30:21.4984839-05:00
Report Post
For the way I use a browser, Firefox is usually lighter on resources than Chrome. Also, when it locks up, it doesn't freeze the rest of my computer like Chrome does. And Chrome, ironically, works terribly with Google's other apps (like Google Docs). This all said, I tend to alternate between the two or use both at once for various reasons. I'm not a big fan of any current browser.
Vote & Comment
4

Safari is a web browser developed by Apple Inc. And included with the Mac OS X and iOS operating systems. First released as a public beta on January 7, 2003 on the company's OS X operating system, it became Apple's default browser beginning with Mac...  OS X v10.3 "Panther". Safari is also a native browser for iOS.A version of Safari for the Microsoft Windows operating system was first released on June 11, 2007, and supported Windows XP Service Pack 2, or later but it has been discontinued. Safari 5.1.7, released on May 9, 2012, is the last version available for Windows.According to Net Applications, Safari accounted for 62.17 percent of mobile web browsing traffic and 5.43 percent of desktop traffic in October 2011, giving a combined market share of 8.72 percent   more
1 vote
0 comments
Safari - Voter Comments
No Comments
Vote & Comment
5

Opera is a web browser and Internet suite developed by Opera Software with over 300 million users worldwide. The latest versions of Opera use the Blink layout engine. Earlier versions used Opera Software's proprietary Presto layout engine and had ad... ditional features such as sending and receiving e-mail messages, managing contacts, chatting on IRC, downloading files via BitTorrent, and reading web feeds. Opera is offered free of charge for personal computers and mobile phones.Opera Mini is the third most popular mobile web browser as of March 2013. It has been chosen as the default integrated web browser in several mobile handsets by their respective manufacturers.Features include tabbed browsing, page zooming, mouse gestures, and an integrated download manager. Its security features include built-in phishing and malware protection and the ability to delete private data such as HTTP cookies. Opera has been noted for originating many features later adopted by other web browsers.Opera runs on a variety of personal computer operating systems, including Microsoft Windows, Mac OS X, Linux, and FreeBSD. Opera editions are available for devices using the Maemo, Bada, BlackBerry, Symbian, Windows Mobile, Android, and iOS operating systems, and Java ME. Approximately 120 million mobile phones have been shipped with Opera. Opera is the only commercial web browser available for the Nintendo DS and Wii gaming systems. Some television set-top boxes as well as TV-set use Opera to render HTML-based interactive content. Adobe Systems has licensed Opera technology for use in the Adobe Creative Suite   more
0 votes
0 comments
Opera - Voter Comments
No Comments
Vote & Comment
No comments yet.
Leave a comment...
(Maximum 900 words)
Privacy Policy | Terms of Use
Sitemap | View Desktop Version
©2021 Debate.org. All rights reserved.