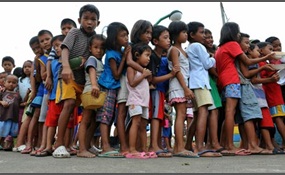 What will happen if the world population continues to grow?

As the world population continues to grow, there are many foreseeable problems in the future. So what do you think will happen?

The world will become very strict and government run. (Such as one child policy for the entire world.)

6 votes
0 comments
The world will become very strict and government run. (Such as one child policy for the entire world.) - Voter Comments
No Comments
Vote & Comment
2

The world will not continue to grow following trends. Poll irrelevant

Nations will begin a massive scramble for resources, causing many to die

3 votes
1 comment
Nations will begin a massive scramble for resources, causing many to die - Voter Comments

Zylorarchy says2014-05-04T06:50:24.4016989-05:00
Report Post
The population is growing rapidly, and technology is not keeping up. At this rate, we will soon run out of natural resources of which most of the world is still dependant on. And what will happen then? War.
Vote & Comment
4

I don't think that the world will get to this point, certainly we are smarter than that

1 vote
0 comments
I don't think that the world will get to this point, certainly we are smarter than that - Voter Comments
No Comments
Vote & Comment
5

Death is the cessation of all biological functions that sustain a living organism. Phenomena which commonly bring about death include biological aging, predation, malnutrition, disease, suicide, murder and accidents or trauma resulting in terminal i... njury. Bodies of living organisms begin to decompose shortly after death. In society, the nature of death and humanity's awareness of its own mortality has for millennia been a concern of the world's religious traditions and of philosophical inquiry. This includes belief in resurrection, reincarnation or rebirth, or that consciousness permanently ceases to exist, known as eternal oblivion. Commemoration ceremonies after death may include various mourning or funeral practices. The physical remains of a person, commonly known as a corpse or body, are usually interred whole or cremated, though among the world's cultures there are a variety of other methods of mortuary disposal. In the English language, blessings directed towards a dead person include rest in peace, or its initialism RIP. The most common cause of human deaths in the world is heart disease, followed by stroke and other cerebrovascular diseases, and in the third place lower respiratory infections   more
1 vote
1 comment
Death - Voter Comments

Technological advances will allow us to continue this exponential growth

Rim says2014-05-18T18:44:25.1822913-05:00
Report Post
Jifpop09: Give a example. Humanity will continue to increase exponentially until we run out of a resource. Its the theory of Equalibiom. Populations of any species will continue to increase as long as there is food and water, until they run out of food, water, or are killed or eaten.
Privacy Policy | Terms of Use
Sitemap | View Desktop Version
©2021 Debate.org. All rights reserved.