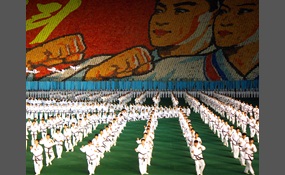 What would be the most likely (main) cause of a North Korean 'liberation' from dictatorship?

I wrote 'liberation' in question marks are North Koreans are so brainwashed they probably wouldn't see themselves a liberated. These theoretical causes come from several webpages, most are the views of North Koran refugees, some of whom said in 2014 that Jong Un's reign would end within 3-15 years.

iamanatheistandthisiswhy says2014-06-17T19:27:40.7547676-05:00
Report Post
One well adapted complete assault. The military is too strong and well fed to consider turning their backs on the Kim's. Additionally, North Korea has no respect for China, so losing their support will just mean more civilian deaths due to hunger and need.

Internal affairs e.g. famine leading to a wide spend disbelief in the truth of propoganda

cpbm says2014-09-15T19:42:42.2739598-05:00
Report Post
Having their leader killed won't affect anything. They already worship, truly really worship, two quite dead leaders. There is also a whole group of the countries most powerful who are interested in keeping the status quo. There is already famine and dodgy internal affairs in the country but only a few people ever gain a proper realisation of what is happening and most of those leave or are suppressed. The situation in the country is not the usual type that leads to a revolution. Although, of course North Korea is a special case in many ways, so why not in that way, too? If China acted against North Korea, change may occur but simply withdrawing support won't do much for the people of North Korea to convince them to be more like China or the rest of the world. International military efforts would be effective eventually but there are so so so many problems with it, including the requirement that the Pacific powers all must agree on the campaign details and the innocent delusion of the people, that is very unlikely the risk would be worth it. The first change will most likely come from the empowerment and education of the people. The revolution, if that's what historians will call it, will probably not be like the ones anywhere else recently or the ones we remember in Assassin's Creed games. Rather it will most likely be like a slow tide of changing opinion (with occasional conflict, sure) like what we saw with sexual, racial and other rights revolutions.
Privacy Policy | Terms of Use
Sitemap | View Desktop Version
©2021 Debate.org. All rights reserved.