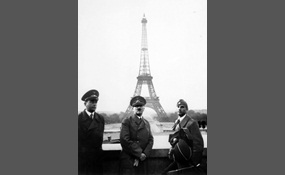 What would have happened in Nazi Germany beat the allies in World War Two?

Adolf Hitler would be assassinated by on of his own officials

Comrade_Silly_Otter says2014-04-12T10:34:36.6263760-05:00
Report Post
If they managed to conquer the world, this would actually help humanity. considering when Fascist/Nationalist leaders die, they are usually replaced by Democratic leader.

Jonjo123 says2014-04-16T19:13:58.8543375-05:00
Report Post
I think Germany and Italy would have taken Africa and the middle east While Japan invaded all of asia. Eventually there would be uprisings in the invaded countries Which would lead to the Empires breaking down into a similar situation to today. Thats just what would happen geopraphically
Vote & Comment
3

Once Adolf died they would change to Democracy

Wolfenstein: The New Order is an upcoming first-person shooter video game in development by MachineGames to be published by Bethesda Softworks for Microsoft Windows, PlayStation 3, PlayStation 4, Xbox 360 and Xbox One. The New Order is the ninth ins... tallment in the Wolfenstein series and the first since 1992 developed without the Id Software label, however developer MachineGames will utilize id Software's proprietary game engine id Tech 5   more
1 vote
0 comments
Wolfenstein: The New Order - Voter Comments
No Comments
Vote & Comment
5

Once Adolf died they would keep a Fascist government

Once Adolf died they would go back to a Monarchy