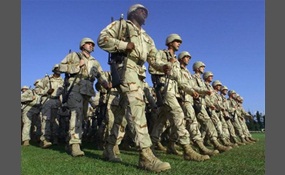 With a International crisis still brewing, rivaling navies, and two others yelling "death to America", three which are for certain nuclear armed and maybe the other, who is more dangerous?

Rival America's navy and her allies in the South China Sea, nuclear armed, 2nd largest military, world's largest population, just passed the U.S from the largest economy, and claims the South China Sea as their own (disputed), This is your answer, C... hina   more
12 votes
6 comments
China - Voter Comments

CannedBread says2015-05-17T10:38:25.8483836-05:00
Report Post
China is going to be our next rival, the they will fall apart just like the British, the Germans, the Confederate states, the Mexicans, the Spanish, the Nazis, the Vietnamese, the Russians, and the Canadians.

Nuclear armed, bold, 3rd largest military, but hurting from U.S and E.U sanctions, and the sole reason NATO was formed. Great and historical military leaders have failed to conquer this nation because of its winter, this is Russia.
6 votes
2 comments
Russia - Voter Comments

Striving to complete its nuclear program and arm itself with nuclear weapons. It is one of the largest militaries in the Middle East and cause the U.S a lot of trouble during the 70s, the also fund Hamas a terrorist organization that wishes to see I... sraels destruction which is one of America's greatest allies. This country is Iran   more
0 votes
0 comments
Iran - Voter Comments
No Comments
Vote & Comment
4
VOTING CLOSED

One of the few remaining Communist nations, a hermit country also. They are run by one of the worlds youngest heads of state, Kim-Jong-Un. They strive to destroy America and South Korea, but are militarily obsolete compare to either of those two. No... rth Korea is still technically still at war with America and South Korea since no testy has been signed ending a 60 year old conflict, it has just been at a cease fire. This is North Korea   more
0 votes
0 comments
North Korea - Voter Comments
No Comments
Vote & Comment
Leave a comment...
(Maximum 900 words)

biggest_pro_going says2015-05-17T16:06:06.3945140-05:00
Report Post
Its funny to look at these polls and see the same pattern. Russia is bad... America is good... So all the American going by this simple mind set pick China. Americans love to grasp the chance to say Russia's not a threat it as..... Regional power. Also the person who made this poll is not the best. WHAT.. "3rd largest military", "but hurting from U.S and E.U sanctions" in American language Russia is bad/weak.... "strive to destroy America and South Korea, but are militarily obsolete compare to either of those two. " I know u Americans love to think North Korea could be destroyed in 1m if they threatened us, but it has like 8,000,000 men in reserve and nukes. Its not much weaker than south Korea.

TheMarquis says2015-05-17T22:28:06.9492131-05:00
Report Post
North Korea is a joke! They couldn't conquer a gnat! Iran doesn't want any trouble. They just want to figure their own stuff out. Putin is a threat to the whole world but as old as he is and as quick as his haters are starting to crop up he is about to have his own issues, and China doesn't want beef with us! China is a rival, but not an enemy. We profit from the success each other gives off. The one who buys everything and the one who makes everything.

58539672 says2015-05-17T23:57:59.0168457-05:00
Report Post
North Korea doesn't even have enough fuel to power all their ships and aircraft. They've been rationing for years now. Their logistics are also limited to the point were they can't feed their own troops beyond their own boarders. All of their equipment in terms of heavy armor, planes, artillery, ships, and missile systems are all at early cold war era tech (1970's), and their nuclear arsenal is also lacking. They've had three nuclear tests, all underground and in the kiloton range, and to date no reliable missile test to deliver them. Their long range capabilities are nonexistent and their short range ones have such a sketchy success rate that no sane nation would rely on it. And like most dictatorships, their military leadership is comprised of officers who were given their positions due to their relationship to the leading party, not to any actually leadership or tactical/strategic skills.