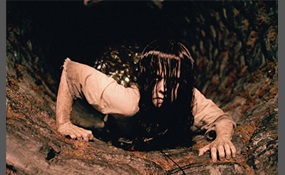 What's the scariest ghost horror movie you have ever seen?

This does not apply to any horror movie, only those where the plot focuses on ghosts or ghost/supernatural activity.

The Conjuring is a 2013 American supernatural horror film directed by James Wan. Vera Farmiga and Patrick Wilson star as Ed and Lorraine Warren who were American paranormal investigators and authors associated with prominent cases of haunting. Their...  reports inspired the Amityville Horror. The Warrens come to the assistance of the Perron family, who are experiencing increasingly disturbing events in their farmhouse in Harrisville, Rhode Island in 1971.The Conjuring was released in the United States and Canada on July 19, 2013, and in the United Kingdom and India on August 6, 2013. The film has received very positive reviews from critics, and has been praised by audiences   more
8 votes
2 comments
The Conjuring - Voter Comments

In folklore and paranormal studies, a poltergeist phenomenon alludes to the apparent yet unexplained manifestation of multiple force reactions caused by a seemingly invisible entity. Most accounts of poltergeist manifestations involve such force bei... ng triggered at objects, usually household, although some seem to describe accompanying hallucinations, as well as physical attacks on human witnesses. Such actions can include pinching, biting, hitting and tripping the victim, or producing sentient noises without clear source.Poltergeists occupy numerous niches in cultural folklore, and have traditionally been described as troublesome spirits who, unlike ghosts, haunt a particular person instead of a specific location. Such alleged poltergeist manifestations have been reported in many cultures and countries including the United States, Japan, Brazil, Australia, and most European nations. The earliest recorded cases date back to the 1st century   more
4 votes
0 comments
Poltergeist - Voter Comments
No Comments
Vote & Comment
3

The Amityville Horror is a 2005 American horror film directed by Andrew Douglas. A remake of the 1979 film of the same name which itself was based on the novel of the same name by Jay Anson, which documents the alleged experiences of the Lutz family...  after they moved into a house on Long Island which had been the scene of a mass murder committed by Ronald DeFeo, Jr. Who murdered six members of his family there in 1974   more
3 votes
1 comment
The Amityville Horror - Voter Comments

Paranormal Activity is a 2007 American supernatural horror film written and directed by Oren Peli. The film centers on a young couple, Katie and Micah, who are haunted by a supernatural presence in their home. It is presented in the style of "found ... footage", from cameras set up by the couple in an attempt to document what is haunting them.Originally developed as an independent feature and given film festival screenings in 2007, the film was acquired by Paramount Pictures and modified, particularly with a new ending. It was given a limited U.S. Release on September 25, 2009, and then a nationwide release on October 16, 2009. The film earned nearly $108 million at the U.S. Box office and $194 million worldwide. Paramount/DreamWorks acquired the U.S. Rights for $350,000. It is the most profitable film ever made, based on return on investment, although such figures are difficult to verify independently as this is likely to exclude marketing costs.A parallel prequel, Paranormal Activity 2, was released on October 22, 2010. The success of the first two films would spawn additional films in the series: Paranormal Activity 3, released on October 21, 2011, Paranormal Activity 4 released on October 19, 2012, and a spin-off titled Paranormal Activity: The Marked Ones set for release on January 3, 2014. A fifth film is set for release in 2014   more
2 votes
0 comments
Paranormal Activity - Voter Comments
No Comments
Vote & Comment
5

The Shining is a 1980 psychological horror film produced and directed by Stanley Kubrick, co-written with novelist Diane Johnson, and starring Jack Nicholson, Shelley Duvall, Scatman Crothers, and Danny Lloyd. The film is based on the Stephen King n... ovel The Shining. A writer, Jack Torrance, takes a job as an off-season caretaker at an isolated hotel. His young son possesses psychic abilities and is able to see things from the past and future, such as the ghosts who inhabit the hotel. Soon after settling in, the family is trapped in the hotel by a snowstorm, and Jack gradually becomes influenced by a supernatural presence; he descends into madness and attempts to murder his wife and son.Unlike previous Kubrick films, which developed an audience gradually by building on word-of-mouth, The Shining was released as a mass-market film, opening at first in just two cities on Memorial Day, then nationwide a month later. Although initial response to the film was mixed, later critical assessment was more favorable and it is now listed among the greatest horror movies, while some have even viewed it as one of the greatest films of all time. Film director Martin Scorsese, writing in The Daily Beast, ranked it as one of the 11 scariest horror movies of all time. Film critics, film students, and Kubrick's producer, Jan Harlan, have remarked on the enormous influence the film has had on popular culture   more
1 vote
0 comments
The Shining - Voter Comments
No Comments
Vote & Comment
6

The Woman in Black

The Woman in Black is a 2012 British horror film directed by James Watkins and written by Jane Goldman, and is based on Susan Hill's novel of the same name. It was produced by Hammer Film Productions. The film stars Daniel Radcliffe, Ciarán Hinds, J... anet McTeer, Sophie Stuckey, and Liz White. It was released in the United States and Canada on 3 February 2012 to generally positive reviews, and was released in the United Kingdom on 10 February 2012   more
1 vote
0 comments
The Woman in Black - Voter Comments
No Comments
Vote & Comment
7

The Ring is a 2002 American psychological horror film directed by Gore Verbinski, starring Naomi Watts, Daveigh Chase, and Martin Henderson. It is a remake of the 1998 Japanese horror film Ringu, which itself was based on Kôji Suzuki's novel Ringu, ... and focuses on a mysterious cursed videotape that contains a seemingly random series of disturbing images. After watching the tape, the viewer receives a phone call in which a girl's voice announces that the viewer will die in seven days. The film was a critical and commercial success   more
1 vote
0 comments
The Ring - Voter Comments
No Comments
Vote & Comment
8

Insidious is a 2010 American supernatural horror film directed by James Wan, written by Leigh Whannell, and starring Patrick Wilson, Rose Byrne and Barbara Hershey. The story centers on a couple whose son inexplicably enters a comatose state and bec... omes a vessel for ghosts in an astral dimension. The film was released in theaters on April 1, 2011, and is FilmDistrict's first theatrical release. A sequel, Insidious: Chapter 2, was released on September 13, 2013, with Wan returning as director and Whannell returning as screenwriter. Because of the film's success it was turned into a maze for 2013's annual Halloween Horror Nights   more
1 vote
0 comments
Insidious - Voter Comments
No Comments
Vote & Comment
9

Gothika tells the store of Dr. Miranda Grey (Halle Berry),a dedicated and successful criminal psychologist who awakens to find herself apatient in her own mental institution with no memory of the murder she'sapparently committed. She soon learns tha... t her husband was brutally murderedthree days earlier, and the bloody evidence points directly at her. With nomemory of that night except for a cryptic encounter with a mysterious younggirl, the doctor's behavior becomes increasingly erratic. Her claims of innocenceare seen by her friends, colleagues and former patients as the beginnings of adeep descent into madness. As Miranda struggles to reclaim her sanity she soonrealizes she's become the pawn of a vengeful spirit. Now she must quicklydetermine if she is being led farther from her sanity or closer to the truth.This supernatural thriller also stars Penelope Cruz (Vanilla Sky, Blow)who plays Chloe, a hauntingly beautiful yet dangerously disturbed youngpatient; Oscar-nominee Robert Downey Jr. (Chaplin,TheSinging Detective) portrays Dr. Pete Graham, Berry's skeptical colleagueand friend; and Emmy Award-winning actor-director Charles S. Dutton (TheCorner,Against the Ropes) plays Dr. Doug Grey, Berry'shusband and chief administrator of the prison psychiatric ward. - From Sony Pictures Publicit   more
0 votes
0 comments
Gothika - Voter Comments
No Comments
Vote & Comment
10

The Others is a 2001 psychological horror film written, directed and scored by Spanish director Alejandro Amenábar, starring Nicole Kidman and Fionnula Flanagan. William Skidelsky of The Observer has suggested that it is inspired by the 1898 novella...  The Turn of the Screw.It won eight Goya Awards, including awards for Best Film and Best Director. This was the first English-language film ever to receive the Best Film Award at the Goyas, without a single word of Spanish spoken in it. The Others was nominated for six Saturn Awards including Best Director and Best Writing for Amenábar and Best Performance by a Younger Actor for Alakina Mann, and won three: Best Horror Film, Best Actress for Kidman and Best Supporting Actress for Fionnula Flanagan. Kidman was also nominated for a Golden Globe Award for Best Actress in Drama and a BAFTA Award for Best Actress, with Amenábar being nominated for a BAFTA Award for Best Original Screenplay, a rare occurrence for a horror film   more
0 votes
0 comments
The Others - Voter Comments
No Comments
Vote & Comment
No comments yet.
Leave a comment...
(Maximum 900 words)
Privacy Policy | Terms of Use
Sitemap | View Desktop Version
©2021 Debate.org. All rights reserved.