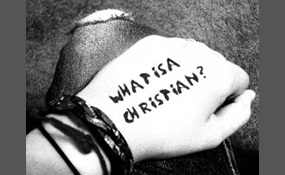 What's your definition of a Christian?

A Christian is a person who adheres to Christianity, an Abrahamic, monotheistic religion based on the life and teachings of Jesus of Nazareth. "Christian" derives from the Koine Greek word Christós, a translation of the Biblical Hebrew term mashiach... .There are diverse interpretations of Christianity which sometimes conflict. However, "Whatever else they might disagree about, Christians are at least united in believing that Jesus has a unique significance.” The term "Christian" is also used adjectivally to describe anything associated with Christianity, or in a proverbial sense "all that is noble, and good, and Christ-like." It is also used as a label to identify people who associate with the cultural aspects of Christianity, irrespective of personal religious beliefs or practices   more
3 votes
0 comments
Christian - Voter Comments
No Comments
Vote & Comment
4

A Christian is a person who loves God and Jesus and most importantly acts upon that love. You don't have to throw Bibles or shun Atheists. That's just stupid. A Christian should be able to accept people no matter how they are. We just can't accept everything the person does, ie., attacking people verbally or physically.

2 votes
1 comment
A Christian is a person who loves God and Jesus and most importantly acts upon that love. You don't have to throw Bibles or shun Atheists. That's just stupid. A Christian should be able to accept people no matter how they are. We just can't accept everything the person does, ie., attacking people verbally or physically. - Voter Comments

Someone who doesn't take the whole Bible literally but believes in Jesus, the Holy Spirit, and God.

1 vote
0 comments
Someone who doesn't take the whole Bible literally but believes in Jesus, the Holy Spirit, and God. - Voter Comments
No Comments
Vote & Comment
6

Someone who is very religious and, because of those beliefs, doesn't agree with gay marriage

0 votes
0 comments
Someone who is very religious and, because of those beliefs, doesn't agree with gay marriage - Voter Comments
No Comments
Vote & Comment
7

Islam is a monotheistic and Abrahamic religion articulated by the Qur'an, a book considered by its adherents to be the verbatim word of God and by the teachings and normative example of Muhammad c. 570 CE – c. 8 June 632 CE], considered by them to b... e the last prophet of God. An adherent of Islam is called a Muslim.Muslims believe that God is one and incomparable and the purpose of existence is to worship God. Muslims also believe that Islam is the complete and universal version of a primordial faith that was revealed before many times throughout the world, including notably through Adam, Noah, Abraham, Moses and Jesus, whom they consider prophets. They maintain that the previous messages and revelations have been partially misinterpreted or altered over time, but consider the Arabic Qur'an to be both the unaltered and the final revelation of God. Religious concepts and practices include the five pillars of Islam, which are basic concepts and obligatory acts of worship, and following Islamic law, which touches on virtually every aspect of life and society, providing guidance on multifarious topics from banking and welfare, to family life and the environment   more
0 votes
0 comments
Islam - Voter Comments
No Comments
Vote & Comment
11

One with the trees

The guy next to me

One with the frog

Hinduism is the dominant religion of the Indian subcontinent, and consists of many diverse traditions. It includes Shaivism, Vaishnavism and Shaktism among numerous other traditions, and a wide spectrum of laws and prescriptions of "daily morality" ... based on karma, dharma, and societal norms. Hinduism is a categorisation of distinct intellectual or philosophical points of view, rather than a rigid, common set of beliefs.Hinduism has been called the "oldest religion" in the world, and some practitioners refer to it as Sanātana Dharma, "the eternal law" or the "eternal way" beyond human origins. It prescribes the "eternal" duties all Hindus have to follow, regardless of class, caste, or sect, such as honesty, purity, and self-restraint.Western scholars regard Hinduism as a fusion or synthesis of various Indian cultures and traditions, with diverse roots and no single founder. This "Hindu synthesis" emerged around the beginning of the Common Era, and co-existed for several centuries with Buddhism, to finally gain the upper hand in most royal circles during the 8th century CE   more
0 votes
0 comments
Hinduism - Voter Comments
No Comments
Vote & Comment
24

Buddhism is a nontheistic religion that encompasses a variety of traditions, beliefs and practices largely based on teachings attributed to Siddhartha Gautama, who is commonly known as the Buddha, meaning "the awakened one". According to Buddhist tr... adition, the Buddha lived and taught in the eastern part of the Indian subcontinent sometime between the 6th and 4th centuries BCE. He is recognized by Buddhists as an awakened or enlightened teacher who shared his insights to help sentient beings end their suffering through the elimination of ignorance and craving by way of understanding and the seeing of Dependent Origination and the Four Noble Truths, with the ultimate goal of attainment of the sublime state of Nirvana.Two major branches of Buddhism are generally recognized: Theravada and Mahayana. Theravada has a widespread following in Sri Lanka and Southeast Asia. Mahayana is found throughout East Asia and includes the traditions of Pure Land, Zen, Nichiren Buddhism, Tibetan Buddhism, Shingon, and Tiantai   more
0 votes
0 comments
Buddhism - Voter Comments
No Comments
Vote & Comment
Leave a comment...
(Maximum 900 words)

ThePotatoKing says2014-07-16T18:00:50.8921729-05:00
Report Post
I am the potato king, patrick speaks the truth, my son was turned into french fries for your sins and my followers are all potatoes, even patrick, bow before me, all other religions are false, this is all the proof you need and i have done many miracles, like you being alive today and everybody shall bow down to me. Soon you shall see my rath!

Protrusion_of_Confusion says2014-07-17T05:18:08.3739050-05:00
Report Post
Why are there so many joke answers? Christians aren't potatoes, we're not idiots. If we're idiots, well, poor Dr.Martin Luther King. Then again, no one cares if a Christian does anything important. Then, there's the other side of this discussion that this is all opinion.

ThePotatoKing says2014-07-19T23:29:32.1455882-05:00
Report Post
First of all I'm not stupid, I know christains aren't potatoes, Second how do you know that im not the Potato King, same as you do not know if there is a god or if there is because you do not posses all knowledge in the Universe, and neither do i. So at the same time that there may be a god, there may not be a god, same as there might be a potato king and there may not be a potato king, you can use this to disprove and prove almost anything.
Privacy Policy | Terms of Use
Sitemap | View Desktop Version
©2020 Debate.org. All rights reserved.