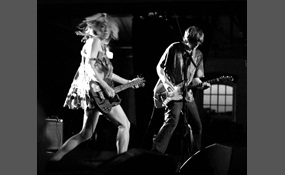 If none of the above are good, you're more than welcome to suggest more songs that don't have swear words. Thank you so much.
4 votes
0 comments
Nirvana-Under the Bridge - Voter Comments
No Comments
Vote & Comment
4

God Put a Smile Upon Your Face

"God Put a Smile upon Your Face" is a song by British alternative rock band Coldplay. It was written by all members of the band for their second album, A Rush of Blood to the Head. The song is built around an acoustic and electric guitar sound, that...  accompanies it with uptempo drumming. The song was released in 14 July 2003 as the fourth single from A Rush of Blood to the Head.Regional singles were released for Canada, Europe, Australia, and an enhanced version for Taiwan. Promo singles were released for the United Kingdom and United States. Since only promo copies were released, the single was only able to chart at number 100 in the UK   more
4 votes
0 comments
God Put a Smile Upon Your Face - Voter Comments
No Comments
Vote & Comment
5

Ellie Goulding- Anything Could Happen

Badly Drawn Boy-Once Around The Block

Florence + The Machine-Dog Days are Over