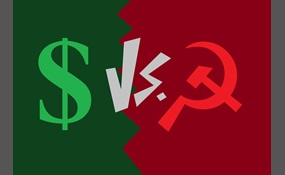 Capitalism is an economic system in which trade, industry, and the means of production are largely or entirely privately owned and operated for profit. Central characteristics of capitalism include capital accumulation, competitive markets and wage ... labour. In a capitalist economy, the parties to a transaction typically determine the prices at which assets, goods, and services are exchanged.The degree of competition, role of intervention and regulation, and scope of state ownership varies across different models of capitalism. Economists, political economists, and historians have taken different perspectives in their analysis of capitalism and recognized various forms of it in practice. These include laissez-faire capitalism, welfare capitalism, crony capitalism and state capitalism; each highlighting varying degrees of dependency on markets, public ownership, and inclusion of social policies. The extent to which different markets are free, as well as the rules defining private property, is a matter of politics and policy. Many states have what are termed capitalist mixed economies, referring to a mix between planned and market-driven elements   more
26 votes
2 comments
Capitalism - Voter Comments

Socialism is a social and economic system characterised by social ownership of the means of production and co-operative management of the economy, as well as a political theory and movement that aims at the establishment of such a system. "Social ow... nership" may refer to cooperative enterprises, common ownership, state ownership, citizen ownership of equity, or any combination of these. There are many varieties of socialism and there is no single definition encapsulating all of them. They differ in the type of social ownership they advocate, the degree to which they rely on markets or planning, how management is to be organised within productive institutions, and the role of the state in constructing socialism.A socialist economic system is based on the organisational precept of production for use, meaning the production of goods and services to directly satisfy economic demand and human needs where objects are valued based on their use-value or utility, as opposed to being structured upon the accumulation of capital and production for profit   more
12 votes
1 comment
Socialism - Voter Comments

The Libertarian Party of Russia is a political party in the Russian Federation founded in 2007. As its name suggests, its political philosophy is libertarian, promoting "self-ownership and non-aggression."The party elected its first member in 2012 i... n Moscow, and plans to run a campaign for the 2012 Moscow Duma elections. It also coordinates the Adam Smith Forum, participates in the organization of the Free People's Forum, and runs several other outreach activities and publications, including a monthly newspaper and a podcast series   more
3 votes
1 comment
Anarcho-capitalism - Voter Comments

Nazism, or National Socialism in full, is the ideology and practice associated with the 20th-century German Nazi Party and state as well as other related far-right groups. It was also promoted in other European countries with large ethnic German com... munities, such as Czechoslovakia, Hungary, Romania and Yugoslavia. Usually characterised as a form of fascism that incorporates scientific racism and antisemitism, Nazism originally developed from the influences of pan-Germanism, the Völkisch German nationalist movement and the anti-communist Freikorps paramilitary culture in post-First World War Germany, which many Germans felt had been left humiliated by the Treaty of Versailles.German Nazism subscribed to theories of racial hierarchy and social Darwinism; the Germanic peoples—also referred to as the Nordic race—were considered to be the purest representation of Aryanism, and therefore the master race. Opposed to both capitalism and Marxism, Nazism aimed to overcome social divisions, with all parts of a racially homogeneous society cooperating for national unity and regeneration and to secure territorial enlargement at the expense of supposedly inferior neighbouring nations   more
2 votes
1 comment
Nazism - Voter Comments

TylerWaage says2015-08-22T16:13:29.8236164Z
Report Post
Most of what we're taught about the Nazi's is 70 year old war-time propaganda, which has never really been challenged. But their accomplishments during 6 years of peace time is astounding and not given enough credit: eliminated unemployment, nearly eliminated crime, eliminated poverty, were the first country to establish animal rights, promoted healthy living, invented jet engines, put the first man made object in space, eliminated smoking etc. They really had the best interests of their people in mind. This system is the ideal social-economic model.
Vote & Comment
5

cludwig says2015-08-20T20:27:55.7802531Z
Report Post
While there are different schools of anarchist thought. The point of view I subscribe to is that human beings are capable of living peacefully together without Government and Police imposing regulation and force to control the population and make them behave in the manner they want them to. I would argue that the current system of jurisprudence in which millions of Americans are locked up in prisons, is a disaster and alternatives need to be considered.

Communism is a socioeconomic system structured upon common ownership of the means of production and characterized by the absence of social classes, money, and the state; as well as a social, political and economic ideology and movement that aims to ... establish this social order. The movement to develop communism, in its Marxist–Leninist interpretations, significantly influenced the history of the 20th century, which saw intense rivalry between the states which claimed to follow this ideology and their enemies.Communism is most associated with Marxism, which considers itself the embodiment of scientific socialism. According to Marxism, capitalism is a historically necessary stage of society, which has led to the concentration of social classes into two major groups: proletariat - who must work to survive, and who make up a majority of society - and bourgeoisie - a minority who derive profit from employing the proletariat, through private ownership of the means of production. The political, social, and economic conflict between both groups, each attempting to push their interests to their logical extreme, will lead into the capture of political power by the proletariat   more
2 votes
0 comments
Communism - Voter Comments
No Comments
Vote & Comment
7

Condom World is a chain of stores in Puerto Rico that is dedicated to the sales of condoms, oils, Adult movies and other types of sex related products.Started in the late 1992, Condom World has caused some controversy around Puerto Rico. Many times ... that a new store in this chain has been opened, it has been met with protests by church and conservative groups.Condom World defends itself against those groups by claiming that their aim is for people to have safe sex and a happier couple life.The company advertises heavily on El Vocero newspaper.Condom World offers movie rentals and sales including adult novelty toys and magazines, averaging two thousand square feet stores in key towns, they had about 26 stores by 2007   more
0 votes
0 comments
Condom World - Voter Comments
No Comments
Vote & Comment
9

Nationalism is a belief, creed or political ideology that involves an individual identifying with, or becoming attached to, one's nation. Nationalism involves national identity, by contrast with the related construct of patriotism, which involves th... e social conditioning and personal behaviors that support a state's decisions and actions.From a political or sociological perspective, there are two main perspectives on the origins and basis of nationalism. One is the primordialist perspective that describes nationalism as a reflection of the ancient and perceived evolutionary tendency of humans to organize into distinct groupings based on an affinity of birth. The other is the modernist perspective that describes nationalism as a recent phenomenon that requires the structural conditions of modern society in order to exist.An alternative perspective to both of these lineages comes out of Engaged theory, and argues that while the form of nationalism is modern, the content and subjective reach of nationalism depends upon 'primordial' sentiments.There are various definitions for what constitutes a nation, however, which leads to several different strands of nationalism   more
0 votes
0 comments
Nationalism - Voter Comments
No Comments
Vote & Comment
10

Fascism is a form of radical authoritarian nationalism that came to prominence in early 20th-century Europe. Influenced by national syndicalism, fascism originated in Italy during World War I, combining more typically right-wing positions with eleme... nts of left-wing politics, in opposition to liberalism, Marxism, and traditional conservatism. Although fascism is often placed on the far-right within the traditional left–right spectrum, several academics have said that the description is inadequate.Fascists sought to unify their nation through an authoritarian state that promoted the mass mobilization of the national community and were characterized by having leadership that initiated a revolutionary political movement aiming to reorganize the nation along principles according to fascist ideology. Fascist movements shared certain common features, including the veneration of the state, a devotion to a strong leader, and an emphasis on ultranationalism and militarism. Fascism views political violence, war, and imperialism as a means to achieve national rejuvenation, and it asserts that stronger nations have the right to expand their territory by displacing weaker nations   more
0 votes
0 comments
Fascism - Voter Comments
No Comments
Vote & Comment
Leave a comment...
(Maximum 900 words)

Discipulus_Didicit says2015-08-20T20:46:30.1109962Z
Report Post
Maybe three depending on if Nazis are a political system or not. I honestly don't know enough about Nazi belief to be sure.

briantheliberal says2015-08-21T05:25:43.2452673Z
Report Post
I can't choose between any of these because they all eventually destroy themselves when relied on too heavily or not properly implemented. There are a little things called 'balance' and 'moderation. As far as I am concerned, there should be a balance between both capitalism and socialism. That is what most democratic nations in the world are doing and their economies, social structures, and quality of life have flourished. Examples - Sweden, Norway, Japan.

triangle.128k says2015-08-21T05:41:05.8460647Z
Report Post
@briantheliberal The Nordic countries like Sweden and Norway actually are very Capitalist, they're not as socialist as you think. I'm not sure how Japan is semi-socialist either. Norway and Sweden have a lot of oil and other resources to get rich off of. Also, those countries have a very low and less-dense population, making them easier to govern.

biggest_pro_going says2015-08-21T12:24:56.5479068Z
Report Post
Oreo222 socialism and Nazism are VERY different the Nazi party was called the national socialist so its name would appeal to socialists to gain popularity

Huntress says2015-08-22T14:19:43.6297295Z
Report Post
Nazis were national socialists. They advocated nationalism as a uniting force for their aims instead of trying to destroy history and culture as the Communist does. They are both far left Hegelian ideologies. ISIS reminds me the most of the later school today in wanting destroy the Sphinx and tearing down Muslim holy sites, despite their fallacious claim of being good Muslims.

biggest_pro_going says2015-08-22T20:06:54.9909527Z
Report Post
Nazis were not socialist in any way. In socialism every one is the same and the Jews were hardly treated the same as Germans in Nazi Germany.

imperialistpunksfrickoff says2015-12-12T18:04:19.7826832Z
Report Post
People voting here don't seem to understand that socialism is not compatible with capitalism. If capitalism is still present then socialism has not been achieved. Most of the people who voted for socialism likely advocate a welfare state such as in Nordic Countries, this type of system will never achieve true socialism. This is just an altered form of capitalism.

imperialistpunksfrickoff says2015-12-12T18:12:03.7200049Z
Report Post
Also Socialism/Communism and Fascism/Nazism could not be further apart. Communism is a far-left system that promotes total equality. Fascism is a far-right ideology that promotes ethnic superiority, nationalization of industry, and promotes nationalism and imperialism, all of which are things Communism inherently fights against, hence why Hitler decided to invade Soviet Russia.
Privacy Policy | Terms of Use
Sitemap | View Desktop Version
©2021 Debate.org. All rights reserved.