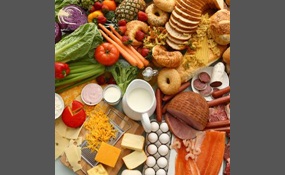 Pick as many as you want! Choose all the foods you enjoy eating! Feel free to add more!

A cupcake is a small cake designed to serve one person, which may be baked in a small thin paper or aluminium cup. As with larger cakes, icing and other cake decorations, such as sprinkles, may be applied.
1 vote
1 comment
Cupcake - Voter Comments

Marzipan is a confection consisting primarily of sugar or honey and almond meal, sometimes augmented with almond oil or extract. It is often made into sweets; common uses are marzipan-filled chocolate and small marzipan imitations of fruits and vege... tables. It is also rolled into thin sheets and glazed for icing cakes, primarily birthday and wedding cakes and Christmas cakes. This use is particularly common in England, on large fruitcakes. Marzipan may also be used as a cake ingredient, as in stollen. In some countries, it is shaped into small figures of animals as a traditional treat for New Year's Day. Marzipan is also used in Tortell, and in some versions of king cake eaten during the Carnival season. Traditional Swedish Princess Cake is typically covered with a layer of marzipan that has been tinted pale green   more
1 vote
1 comment
Marzipan - Voter Comments

Beer is an alcoholic beverage produced by the saccharification of starch and fermentation of the resulting sugar. The starch and saccharification enzymes are often derived from malted cereal grains, most commonly malted barley and malted wheat. Most...  beer is also flavoured with hops, which add bitterness and act as a natural preservative, though other flavourings such as herbs or fruit may occasionally be included. The preparation of beer is called brewing. Beer is the world's most widely consumed alcoholic beverage, and is the third-most popular drink overall, after water and tea. It is thought by some to be the oldest fermented beverage. Some of humanity's earliest known writings refer to the production and distribution of beer: the Code of Hammurabi included laws regulating beer and beer parlours, and "The Hymn to Ninkasi", a prayer to the Mesopotamian goddess of beer, served as both a prayer and as a method of remembering the recipe for beer in a culture with few literate people. Today, the brewing industry is a global business, consisting of several dominant multinational companies and many thousands of smaller producers ranging from brewpubs to regional breweries   more
0 votes
0 comments
Beer - Voter Comments
No Comments
Vote & Comment
15

Tempura is a Japanese dish of seafood or vegetables that have been battered and deep fried.
0 votes
0 comments
Tempura - Voter Comments
No Comments
Vote & Comment
16

Egg drop soup is a Chinese soup of wispy beaten eggs in boiled chicken broth. Condiments such as black pepper or white pepper, and finely chopped scallions and tofu are also commonly added. The soup is finished by adding a thin stream of beaten eggs...  to the boiling broth in the final moments of cooking, creating thin, silken strands or flakes of cooked egg that float in the soup. Egg drop soup using different recipes is also known as a simple-to-prepare soup in different European countries and Japan   more
0 votes
0 comments
Egg drop soup - Voter Comments
No Comments
Vote & Comment
18

Guacamole is an avocado-based dip that originated with the Aztecs in Mexico. In addition to its use in modern Mexican cuisine it has also become part of American cuisine as a dip, condiment and salad ingredient. It is traditionally made by mashing r... ipe avocados and sea salt with a molcajete. Some recipes call for tomato, onion, garlic, lemon juice, chili, yogurt and/or additional seasonings   more
0 votes
0 comments
Guacamole - Voter Comments
No Comments
Vote & Comment
19

In the United States and Canada a cookie is a small, flat, baked treat, usually containing flour, eggs, sugar, and either butter or cooking oil, and often including ingredients such as raisins, oats, or chocolate chips. Most other English-speaking c... ountries would call it a biscuit   more
0 votes
0 comments
Cookie - Voter Comments
No Comments
Vote & Comment
20

Gelato is the Italian word for ice cream, derived from the Latin word "gelātus". In American English this word commonly refers to varieties of ice cream made in a traditional Italian style. Gelato is made with milk, cream, various sugars, and flavor... ing such as fresh fruit and nut purees. Gelato is a type of soft ice cream containing a relatively small amount of air. By statute, gelato in Italy must have at least 3.5% butterfat, with no upper limit established. The sugar content in homemade gelato, as in traditional ice cream, is balanced with the water content to act as an anti-freeze to prevent it from freezing solid. Types of sugar used include sucrose, dextrose, and inverted sugar to control apparent sweetness. Typically, gelato—like any other ice cream—needs a stabilizing base. Egg yolks are used in yellow custard-based gelato flavors, including zabaione and creme caramel, and non-fat milk solids are also added to gelato to stabilize the base. Starches and gums, especially corn starch, are sometimes also used to thicken and stabilize the mix   more
0 votes
0 comments
Gelato - Voter Comments
No Comments
Vote & Comment
22

Cronut is a croissant-doughnut pastry invented and trademarked by Dominique Ansel Bakery in New York City. The pastry is made by frying a laminated dough in grape seed oil. The fried pastry is then sugared, filled, and glazed. The Boston Globe descr... ibed the Cronut as a "food portmanteau". In December 2013, TIME magazine named the cronut as one of the "25 Best Inventions" of 2013   more
0 votes
0 comments
Cronut - Voter Comments
No Comments
Vote & Comment
23

A burrito, is a type of Mexican-American food. It consists of a wheat flour tortilla wrapped or folded into a cylindrical shape to completely enclose the filling. The flour tortilla is usually lightly grilled or steamed, to soften it and make it mor... e pliable. In Mexico, meat and refried beans are sometimes the only fillings.In the United States, burrito fillings generally include a combination of ingredients such as Mexican-style rice or plain rice, refried beans or beans, lettuce, salsa, meat, guacamole, cheese, and sour cream, and the size varies. Typically, American-style burritos are stuffed with more ingredients than the primary meat and/or vegetable filling   more
0 votes
0 comments
Burrito - Voter Comments
No Comments
Vote & Comment
26

General Tso's chicken is a sweet, slightly spicy, deep-fried chicken dish that is popularly served in American Chinese restaurants. The dish is most commonly regarded as a Hunanese dish, although it was unknown in China and other lands home to the C... hinese diaspora before it was introduced by chefs returning from the United States. The dish is named after General Tso Tsung-tang, or Zuo Zongtang, a Qing dynasty general and statesman, although there is no recorded connection to him. The real roots of the dish lie in the post-1949 exodus of chefs to the United States   more
0 votes
0 comments
General Tso's chicken - Voter Comments
No Comments
Vote & Comment
27

Frozen yogurt is a frozen dessert made with yogurt and sometimes other dairy products. It varies from slightly to much more tart than ice cream, as well as being lower in fat. It is different from ice milk and conventional soft serve. Unlike yogurt,...  frozen yogurt is not regulated by the U.S. Food and Drug Administration but is regulated by some U.S. states. Frozen yogurt may or may not contain live and active bacteria cultures   more
0 votes
0 comments
Frozen yogurt - Voter Comments
No Comments
Vote & Comment
29

Flan is an open pastry or sponge cake containing a sweet or savoury filling. A typical flan of this sort is round, with shortcrust pastry. It is similar to a custard tart or a South African melktert. British savoury flans may have diverged from the ... Spanish and French custard flans in the Middle Ages   more
0 votes
0 comments
Flan - Voter Comments
No Comments
Vote & Comment
30

Edamame or edamame bean is a preparation of immature soybeans in the pod, found in the cuisine of Taiwan, China, Japan, Indonesia and Hawaii. The pods are boiled or steamed and served with salt. Outside East Asia, the dish is most often found in Jap... anese restaurants and some Chinese restaurants but it also has found popularity elsewhere as a healthy food item. In the United States it is often sold in bags in the frozen food section of grocery stores   more
0 votes
0 comments
Edamame - Voter Comments
No Comments
Vote & Comment
41