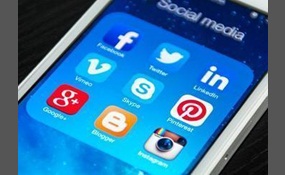 Best photo sharing app there is! Plus, it includes cool filters and editing tools for your pictures.
6 votes
0 comments
Instagram - Voter Comments
No Comments
Vote & Comment
2

Tumblr is essentially a stripped-down blog, almost closer to Twitterthan Blogger. It launched in March and has 100,000 registered users.The appeal to its fans seems to be its clean look and ease-of-use.
2 votes
0 comments
Tumblr - Voter Comments
No Comments
Vote & Comment
3

Google+ is a social networking service operated by Google Inc. The service launched on June 28, 2011, in an invite-only testing phase. The following day, existing users were allowed to invite friends, who are above 18 years of age, to the service to...  create their own accounts. However, this was quickly suspended in a day after there was "insane demand" for accounts.Google+ will be built as a layer that not only integrates different Google social services, such as Google Profiles and Google Buzz, but also introduces many new features including Circles, Hangouts, Sparks and Huddles. Google+ will also be available as a desktop application and as an application on Android and iOS operating systems. Sources such as The New York Times have declared it Google's biggest attempt to rival the social network Facebook, which had over three quarters of a billion users in 2011   more
2 votes
0 comments
Google+ - Voter Comments
No Comments
Vote & Comment
5

Send short messages (up to 140 characters) to all your followers and friends!
1 vote
0 comments
Twitter - Voter Comments
No Comments
Vote & Comment
6

LinkedIn is a business-oriented social networking service. Founded in December 2002 and launched on May 5, 2003, it is mainly used for professional networking. In 2006, LinkedIn increased to 20 million members. As of June 2013, LinkedIn reports more...  than 259 million acquired users in more than 200 countries and territories.The site is available in 20 languages, including English, French, German, Italian, Portuguese, Spanish, Dutch, Swedish, Danish, Romanian, Russian, Turkish, Japanese, Czech, Polish, Korean, Indonesian, Malay, and Tagalog. As of 2 July 2013, Quantcast reports LinkedIn has 65.6 million monthly unique U.S. visitors and 178.4 million globally, a number that as of 29 October 2013 has increased to 184 million. In June 2011, LinkedIn had 33.9 million unique visitors, up 63 percent from a year earlier and surpassing MySpace. LinkedIn filed for an initial public offering in January 2011 and traded its first shares on May 19, 2011, under the NYSE symbol "LNKD"   more
0 votes
0 comments
LinkedIn - Voter Comments
No Comments
Vote & Comment
7

Choose emotions and write how you feel. Vent has a small community of supportive people who will listen to you get things of your chest.
0 votes
0 comments
Vent - Voter Comments
No Comments
Vote & Comment
8

MySpace is a popular social networking website offering an interactive, user-submitted network of friends, personal profiles, blogs, groups, photos, music and videos internationally. It is headquartered in Beverly Hills, California, US, where it sha... res an office building with its immediate owner, Fox Interactive Media; in turn, the owner of Fox Interactive and therefore MySpace, News Corporation, is headquartered in New York City. According to Alexa Internet, MySpace is currently the world's sixth most popular English-language website and the sixth most popular website in any language, and the third most popular website in the United States , though it has topped the chart on various weeks. The service has gradually gained more popularity than similar websites to achieve nearly 80% of visits to online social networking websites. It has become an increasingly influential part of contemporary popular culture, especially in English speaking countries   more
0 votes
0 comments
Myspace - Voter Comments
No Comments
Vote & Comment
Leave a comment...
(Maximum 900 words)