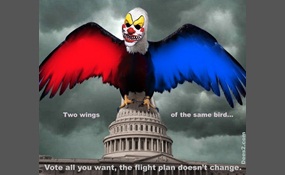 These are the 6 basic political groups. Conservatism, libertarianism, and anarchism are towards the right and believe that individuals can govern themselves but each believing it at a different level. To the left the groups believe with government controlling more for the betterment of society, crime and poverty can be lowered.

Government needed to be involved in almost everything, higher taxes, people need to depend on government and keep people equal to lower crime and poverty. Statism/Left Wing
9 votes
1 comment
Liberalism/Progressivism - Voter Comments

Government only needed to keep people from harming other people. Minial government and taxes. America was this at the birth of the country. Individualism/Right Wing
4 votes
0 comments
Libertarianism - Voter Comments
No Comments
Vote & Comment
4

No government at all. The idea that with no government people will govern themselves and the good in humans will emerge. Individualism/Right Wing
2 votes
0 comments
Anarchy - Voter Comments
No Comments
Vote & Comment
5

komododragon8 says2015-05-01T10:05:36.5026226-05:00
Report Post
The left and right were developed around the time of the French revolution, the right supported the king and the traditional social hierarchy, while the left supported the creation of a republic.
Privacy Policy | Terms of Use
Sitemap | View Desktop Version
©2020 Debate.org. All rights reserved.