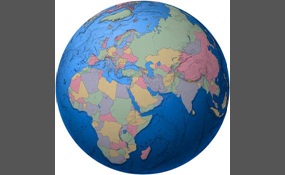 Where do you live

Earth, also known as "the Earth" and "the World" and sometimes referred to as the "Blue Planet", the "Blue Marble", Terra or "Gaia", is the third-most distant planet from the Sun, the densest planet in the Solar System, the largest of the Solar Syst... em's four terrestrial planets and the only celestial body known to accommodate life. It is home to millions of species, including a global population of humans, that are supported and nourished by its biosphere and minerals. The human population is grouped into around two-hundred independent sovereign states that interact, among other means, through diplomacy, conflict, travel, trade and media.According to evidence from sources such as radiometric dating, Earth was formed around four and a half billion years ago. Within its first billion years, life appeared in its oceans and began to affect its atmosphere and surface, promoting the proliferation of aerobic as well as anaerobic organisms and causing the formation of the atmosphere's ozone layer. This layer and Earth's magnetic field block the most life-threatening parts of the Sun's radiation, so life was able to flourish on land as well as in water   more
5 votes
0 comments
Earth - Voter Comments
No Comments
Vote & Comment
3

Auschwitz concentration camp was a network of concentration and extermination camps built and operated by the Third Reich in Polish areas annexed by Nazi Germany during World War II. It consisted of Auschwitz I, Auschwitz II–Birkenau, Auschwitz III–... Monowitz, and 45 satellite camps.Auschwitz I was first constructed to hold Polish political prisoners, who began to arrive in May 1940. The first extermination of prisoners took place in September 1941, and Auschwitz II–Birkenau went on to become a major site of the Nazi "Final Solution to the Jewish question". From early 1942 until late 1944, transport trains delivered Jews to the camp's gas chambers from all over German-occupied Europe, where they were killed with the pesticide Zyklon B. At least 1.1 million prisoners died at Auschwitz, around 90 percent of them Jewish; approximately 1 in 6 Jews killed in the Holocaust died at the camp. Others deported to Auschwitz included 150,000 Poles, 23,000 Romani and Sinti, 15,000 Soviet prisoners of war, 400 Jehovah's Witnesses, homosexuals, and tens of thousands of people of diverse nationalities. Living conditions were brutal, and many of those not killed in the gas chambers died of starvation, forced labor, infectious diseases, individual executions, and medical experiments   more
2 votes
2 comments
Auschwitz concentration camp - Voter Comments

Thailand, officially the Kingdom of Thailand, formerly known as Siam, is a country located at the centre of the Indochina peninsula in Southeast Asia. It is bordered to the north by Burma and Laos, to the east by Laos and Cambodia, to the south by t... he Gulf of Thailand and Malaysia, and to the west by the Andaman Sea and the southern extremity of Burma. Its maritime boundaries include Vietnam in the Gulf of Thailand to the southeast, and Indonesia and India in the Andaman Sea to the southwest.Thailand is a monarchy currently headed by King Bhumibol Adulyadej, Rama IX and governed by a military junta that took power in May 2014. The king is the ninth of the House of Chakri, and has reigned since 1946 as the world's longest-serving current head of state and the country's longest-reigning monarch. The King of Thailand's titles include Head of State, Head of the Armed Forces, Adherent of Buddhism, and Upholder of religions. Although a constitutional system was established in 1932, the monarchy and military have continued to intervene periodically in politics   more
1 vote
0 comments
Thailand - Voter Comments
No Comments
Vote & Comment
10

Australia, officially the Commonwealth of Australia, is a country comprising the mainland of the Australian continent, the island of Tasmania, and numerous smaller islands. It is the world's sixth-largest country by total area. Neighbouring countrie... s include Indonesia, East Timor and Papua New Guinea to the north; the Solomon Islands and Vanuatu to the north-east; and New Zealand to the south-east.For at least 40,000 years before the first British settlement in the late 18th century, Australia was inhabited by indigenous Australians, who spoke languages grouped into roughly 250 language groups. After the European discovery of the continent by Dutch explorers in 1606, Australia's eastern half was claimed by Great Britain in 1770 and initially settled through penal transportation to the colony of New South Wales from 26 January 1788. The population grew steadily in subsequent decades; the continent was explored and an additional five self-governing Crown Colonies were established.On 1 January 1901, the six colonies federated, forming the Commonwealth of Australia   more
1 vote
1 comment
Australia - Voter Comments

Norway, officially the Kingdom of Norway, is a Scandinavian unitary constitutional monarchy whose territory comprises the western portion of the Scandinavian Peninsula, Jan Mayen, the Arctic archipelago of Svalbard, and the sub-Antarctic Bouvet Isla... nd. Norway has a total area of 385,252 square kilometres and a population of 5,109,059 people. It is the 2nd least densely populated country in Europe. The country shares a long eastern border with Sweden, which is the longest uninterrupted border within both Scandinavia and Europe at large. Norway is bordered by Finland and Russia to the north-east, and the Skagerrak Strait to the south, with Denmark on the other side. Norway's extensive coastline, facing the North Atlantic Ocean and the Barents Sea, is laced with fjords, a renowned part of its landscape. The capital city Oslo is the largest in the nation, with a population of 630,000. Norway has extensive reserves of petroleum, natural gas, minerals, lumber, seafood, fresh water, and hydropower.Two centuries of Viking raids to southern and western areas tapered off following the adoption of Christianity in AD 994   more
1 vote
0 comments
Norway - Voter Comments
No Comments
Vote & Comment
12

Ireland, also commonly referred to as the Republic of Ireland, is a sovereign state in Europe occupying about five-sixths of the island of Ireland. The capital and largest city is Dublin, located in the eastern part of the island, whose metropolitan...  area is home to around a quarter of the country's 4.6 million inhabitants. The state shares its only land border with Northern Ireland, a part of the United Kingdom. It is surrounded by the Atlantic Ocean, with the Celtic Sea to the south, Saint George's Channel to the south east, and the Irish Sea to the east. It is a unitary, parliamentary republic with an elected president serving as head of state. The head of government, the Taoiseach, is nominated by the lower house of parliament, Dáil Éireann.Following the Irish War of Independence and the subsequent Anglo-Irish Treaty, Ireland gained effective independence from the United Kingdom as the Irish Free State in 1922. Northern Ireland exercised an option called the Ulster Month to remain in the United Kingdom. Initially a dominion within the British Empire, the Free State received official British recognition of full legislative independence in the Statute of Westminster of 1931   more
1 vote
0 comments
Republic of Ireland - Voter Comments
No Comments
Vote & Comment
13

Scotland is a country that is part of the United Kingdom. Occupying the northern third of the island of Great Britain, Scotland shares a border with England to the south, and is otherwise surrounded by the Atlantic Ocean; with the North Sea to the e... ast, and the North Channel and Irish Sea to the south-west. In addition to the mainland, the country is made up of more than 790 islands, including the Northern Isles and the Hebrides.Edinburgh, the country's capital and second-largest city, is one of Europe's largest financial centres. Edinburgh was the hub of the Scottish Enlightenment of the 18th century, which transformed Scotland into one of the commercial, intellectual, and industrial powerhouses of Europe. Glasgow, Scotland's largest city, was once one of the world's leading industrial cities and now lies at the centre of the Greater Glasgow conurbation. Scottish waters consist of a large sector of the North Atlantic and the North Sea, containing the largest oil reserves in the European Union. This has given Aberdeen, the third-largest city in Scotland, the title of Europe's oil capital   more
1 vote
0 comments
Scotland - Voter Comments
No Comments
Vote & Comment
14

Nazi Germany and the Third Reich are common names for Germany during the period from 1933 to 1945, when its government was controlled by Adolf Hitler and his National Socialist German Workers' Party, commonly known as the Nazi Party. Under Hitler's ... rule, Germany was transformed into a fascist totalitarian state which controlled nearly all aspects of life. Nazi Germany ceased to exist after the Allied Forces defeated Germany in May 1945, ending World War II in Europe.After Hitler was appointed Chancellor of Germany by the President of the Weimar Republic Paul von Hindenburg on 30 January 1933, the Nazi Party began to eliminate all political opposition and consolidate their power. Hindenburg died on 2 August 1934, and Hitler became dictator of Germany when the powers and offices of the Chancellery and Presidency were merged. A national referendum held 19 August 1934 confirmed Hitler as sole Führer of Germany. All power was centralised in Hitler's hands, and his word was above all laws. The government was not a coordinated, co-operating body, but rather a collection of factions struggling to amass power and gain Hitler's favour   more
1 vote
0 comments
Nazi Germany - Voter Comments
No Comments
Vote & Comment
16

Wales is a country that is part of the United Kingdom and the island of Great Britain, bordered by England to its east and the Atlantic Ocean and Irish Sea to its west. It had a population in 2011 of 3,063,456 and has a total area of 20,779 km². Wal... es has over 1,680 miles of coastline and is largely mountainous, with its highest peaks in the north and central areas, including Snowdon, its highest summit. The country lies within the north temperate zone and has a changeable, maritime climate.Welsh national identity emerged among the Celtic Britons after the Roman withdrawal from Britain in the 5th century, and Wales is regarded as one of the modern Celtic nations. Llywelyn ap Gruffudd's death in 1282 marked the completion of Edward I of England's conquest of Wales, though Owain Glyndŵr briefly restored independence to what was to become modern Wales, in the early 15th century. The whole of Wales was annexed by England and incorporated within the English legal system under the Laws in Wales Acts 1535–1542. Distinctive Welsh politics developed in the 19th century   more
0 votes
0 comments
Wales - Voter Comments
No Comments
Vote & Comment
Leave a comment...
(Maximum 900 words)