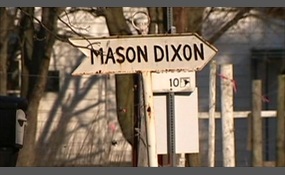 Where does the South start?

The parallel 36°30′ north is a circle of latitude that is 36 and one-half degrees north of the equator of the Earth. This parallel of latitude is particularly significant in the history of the United States as the line of the Missouri Compromise, wh... ich was used to divide the prospective slave and free states west of the Mississippi River, with the exception of Missouri, which is mostly north of this parallel   more
1 vote
0 comments
Parallel 36°30′ north - Voter Comments
No Comments
Vote & Comment
3

The Delmarva Peninsula is a large peninsula on the East Coast of the United States, occupied by most of Delaware and portions of Maryland and Virginia. The peninsula is 170 miles long. In width, it ranges from 70 miles to 12 miles at the isthmus on ... its northern edge to less near its southern tip. It is bordered by the Chesapeake Bay on the west, the Delaware River, Delaware Bay, and the Atlantic Ocean on the east, and the Elk River and its isthmus on the north.The northern isthmus of the peninsula is transected by the sea-level Chesapeake and Delaware Canal, effectively making it an island. Several bridges cross the canal, and the Chesapeake Bay Bridge and the Chesapeake Bay Bridge–Tunnel join the peninsula to mainland Maryland and Virginia, respectively. Another point of access is Lewes, Delaware, reachable by ferry from Cape May, New Jersey.Dover, Delaware's capital city, is the peninsula's largest city by population but the main commercial area is Salisbury, Maryland, near its center. Including all offshore islands, the total land area south of the Chesapeake and Delaware Canal is 5,454 sq mi. At the 2000 census the total population was 681,030, giving an average population density of 124.86 persons/sq mi   more
0 votes
0 comments
Delmarva Peninsula - Voter Comments
No Comments
Vote & Comment
8