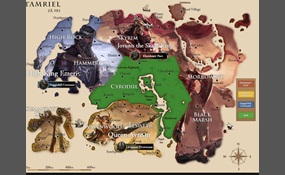 Where in tamriel would you live?

Feel free to add other places

debate_power says2014-06-20T16:34:52.5486645-05:00
Report Post
I'd love to live in the land of adventure- Skyrim has a very varied landscape and is full of lore and ancient secrets. It was the land where the first humans in the Elder Scrolls Universe landed on Tamriel. Sure, call me a geek if you want, but Skyrim is still my favorite game.
Vote & Comment
3

Atmora, also known as Altmora or Elder Wood in Ehlnofex,[1][2][3] is a frozen continent located far to the north of Tamriel, across the Sea of Ghosts. It was home to a race of men known as Atmorans around the Merethic Era.[4][5]
0 votes
0 comments
Atmora - Voter Comments
No Comments
Vote & Comment
12

Akavir, (meaning "Dragon Land" in the native Akaviri[1]) is a continent lying to the east of Tamriel. It is the homeland of four seemingly unrelated races collectively referred to as the "Akaviri," which is composed of the Snow Demons of Kamal, the ... serpent-men of Tsaesci, the Monkey People of Tang Mo, and the Tiger Dragons of Ka'Po'Tun. Little else is known about the continent or the people of Akavir, as few Tamrielic peoples have ever dared to cross the vast ocean that separated it from Tamriel. It was believed that humans lived in Akavir at one time but were eventually "eaten" by the Tsaesci, who have themselves launched several attacks upon Tamriel in past ages.[1] The latest contact with Akavir was attempted by the Nerevarine, who supposively launched a trip to Akavir after defeating Dagoth Ur.[2] Though Akavir may sound too bestial to take notice of at first glance, it was an important figure and influence on Tamriel's history. Akavir has influenced Tamriel for countless centuries, both in times of peace and war, as the two continents have always had a tumultuous relationship   more
0 votes
0 comments
Akavir - Voter Comments
No Comments
Vote & Comment
13