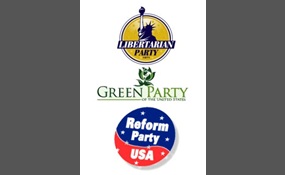 Which American third party is your favorite?

There are many American third parties. The question is, which one is your favorite?

The Libertarian Party is an American national political party that reflects, represents and promotes the ideas and philosophies of libertarianism and free-market, laissez-faire capitalism. The Libertarian Party was conceived at meetings in the home ... of David F. Nolan in Westminster, Colorado in 1971. The official formation of the Libertarian Party occurred on December 11, 1971 in Colorado Springs, Colorado. The founding of the party was prompted in part due to concerns about the Vietnam War, conscription, and the end of the gold standard.Although there is not an explicitly-labeled "left" or "right" designation of the party, many members, such as 2012 presidential nominee Gary Johnson, state that they are more socially liberal than the Democrats, but more fiscally conservative than the Republicans. The party has generally promoted a classical liberal platform, in contrast to the social liberal and progressive platform of the Democrats and the more conservative platform of the Republicans. Current policy positions include lowering taxes, allowing people to opt-out of Social Security, abolishing welfare, ending the prohibition of illegal drugs, and supporting gun ownership rights   more
9 votes
3 comments
Libertarian Party - Voter Comments

The Green Party of the United States is a national political party in the United States founded in 1984 as a federation of state green parties. With its founding, the Green Party of the United States became the primary national Green organization in...  that country, eclipsing the Greens/Green Party USA, which emphasized non-electoral movement building. The Association of State Green Parties, a forerunner organization, first gained widespread public attention during Ralph Nader's United States presidential campaigns in 1996 and 2000. The party has no current representation in the U.S. House of Representatives nor the Senate and controls no governorships nor other state-wide elected positions. At the state legislature level, until 2014 the party controlled one seat in the Arkansas House of Representatives. A number of Greens around the United States hold positions as city and town council members and mayors   more
7 votes
1 comment
Green Party - Voter Comments

The American Nazi Party was an American political party founded by George Lincoln Rockwell. Headquartered in Arlington, Virginia, Rockwell initially called it the World Union of Free Enterprise National Socialists, but later renamed it the American ... Nazi Party in 1960 to attract maximum media attention. The party was based largely upon the ideals and policies of Adolf Hitler's NSDAP in Germany during the Third Reich but also expressed allegiance to the Constitutional principles of the U.S.'s Founding Fathers. It also espoused Holocaust denial   more
1 vote
0 comments
American Nazi Party - Voter Comments
No Comments
Vote & Comment
6
VOTING CLOSED

The Communist Party USA is a communist political party in the United States. It is the largest communist party in the country. Established in 1919, it has a long, complex history that is closely related to the histories of similar communist parties ... worldwide and the U.S. labor movement. For the first half of the 20th century, the Communist Party was a highly influential force in various struggles for democratic rights. It played a prominent role in the U.S. labor movement from the 1920s through the 1940s, having a major hand in founding most of the country's first industrial unions while also becoming known for opposing racism and fighting for integration in workplaces and communities during the height of the Jim Crow period of U.S. racial segregation. Historian Ellen Schrecker concludes that decades of recent scholarship offer "a more nuanced portrayal of the party as both a Stalinist sect tied to a vicious regime and the most dynamic organization within the American Left during the 1930s and '40s". By August 1919, only months after its founding, the Communist Party claimed 50,000 to 60,000 members. Members also included anarchists and other radical leftists   more
0 votes
0 comments
Communist Party USA - Voter Comments
No Comments
Vote & Comment
7
VOTING CLOSED

The Modern Whig Party is a United States political party whose stated intention is to be a "party for the rest of us." The Modern Whig Party, founded by U.S. military veterans, describes itself as a mainstream, middle-of-the-road grassroots movement...  that caters to those voters who believe in various Republican causes but also believe in various other Democratic causes.Founded by Iraq and Afghanistan veterans, the party claims 25,000 to 30,000 supporters, many of them affiliated with the American military. The general platform of the Modern Whig Party relates to fiscal responsibility, strong national defense, and social progression   more
0 votes
0 comments
Modern Whig Party - Voter Comments
No Comments
Vote & Comment
10
VOTING CLOSED

The Pirate Party is an American political party founded in 2006 by Brent Allison and Alex English. The party's platform is aligned with the global Pirate movement, and supports reform of intellectual property laws to reflect open source and free cul... ture values, government transparency, protection of privacy and civil liberties, rolling back corporate personhood and corporate welfare, evidence-based policy, and egalitarianism and meritocracy based on the hacker ethic.The party's national organization has existed in multiple incarnations since its 2006 founding. Its most recent is the Pirate National Committee, formed in 2012 as a coalition of state parties. The PNC officially recognizes Pirate parties from 8 states, and tracks and assists the growth of more state parties throughout the United States   more
0 votes
0 comments
United States Pirate Party - Voter Comments
No Comments
Vote & Comment
11
VOTING CLOSED

The Reform Party of the United States of America, generally known as the Reform Party USA or the Reform Party, is a political party in the United States, founded in 1995 by Ross Perot. Perot said Americans were disillusioned with the state of politi... cs—as being corrupt and unable to deal with vital issues—and desired a viable alternative to the Republican and Democratic Parties. The party has nominated different candidates over the years, such as founder Ross Perot, Pat Buchanan, and Ralph Nader.The party's most significant victory came when Jesse Ventura was elected governor of Minnesota in 1998   more
0 votes
0 comments
Reform Party - Voter Comments
No Comments
Vote & Comment
12
VOTING CLOSED

The Veterans' Party of America is a political party based in St. Petersburg, Florida, USA.The VPA fielded several candidates in 2003, including a US Senate candidate in Florida. However, the party achieved limited electoral success, and bitter infig... hting caused it to split into two rival factions in 2006. In August 2008, the VPA officially ceded its membership and ideology to the Modern Whig Party due to that organization's relatively large military membership, totaling at the time about 10,000 people, 6,500 of which were affiliated with the military.Another party known as the Veterans' Party of America was formed by a group of veterans in December 2013 after the United States Senate approved a new budget deal which included cuts to military members' benefits. Within its first two months, the party amassed a following of almost 20,000 Facebook likes, forty-six state affiliates had been formed, and federal recognized party status was achieved   more
0 votes
0 comments
Veterans' Party of America - Voter Comments
No Comments
Vote & Comment
Leave a comment...
(Maximum 900 words)

benhos says2015-05-26T17:03:24.3258398-05:00
Report Post
I love how the Constitution Party believes the United States was founded on Christian values. It is in the freaking Constitution that the country shall not be ruled according to any religious beliefs.

debate_power says2015-05-29T17:01:09.1535917-05:00
Report Post
@themightyindividual There's no reason why private-property rights that infringe on my personal freedoms should be enforced. I care about myself. I want the freedom to use as much money as possible, to become as rich as possible, and to do whatever I want.

CyberConor says2015-05-31T15:45:24.6424822-05:00
Report Post
@debate_power, i am confused, private-property rights dont infringe on personal freedoms, it promotes it. I mean, why should anyone take what you earned legally. Unless you robbed someone and forced them, then its fine.
Privacy Policy | Terms of Use
Sitemap | View Desktop Version
©2020 Debate.org. All rights reserved.