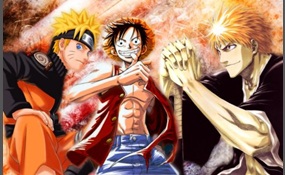 Which anime has the best plot? Naruto, One Piece, or Bleach

Naruto is a Japanese manga series written and illustrated by Masashi Kishimoto. It tells the story of Naruto Uzumaki, an adolescent ninja who constantly searches for recognition and dreams to become the Hokage, the ninja in his village who is acknow... ledged as the leader and the strongest of all. The series is based on a one-shot manga by Kishimoto that was published in the August 1997 issue of Akamaru Jump. Naruto was first published by Shueisha in 1999 in the 43rd issue of Japan's Weekly Shōnen Jump magazine. Currently, the manga is still being serialized with the chapters collected into sixty-eight tankōbon volumes so far. The manga was later adapted into a television anime, which was produced by Studio Pierrot and Aniplex. It premiered across Japan on the terrestrial TV Tokyo and other TX Network stations on October 3, 2002. The first series lasted 220 episodes, while Naruto: Shippuden, a sequel to the original series, has been airing since February 15, 2007. In addition to the anime series, Studio Pierrot has developed eight movies and several original video animations. Other types of merchandise include light novels, video games and trading cards developed by several companies   more
5 votes
1 comment
Naruto - Voter Comments

MomoDzjamal says2014-05-14T08:52:30.5804840-05:00
Report Post
I think Naruto is better than Bleach and One Piece, because the storyline is more interesting. The seemingly endless amount of Jutsus and techniques in this series shows how much effort has been put into giving each character his own fighting style and personality. The background stories and flashbacks add a whole new dimension to the story, linking different people together and creating (according to me) the most ingenious storyline ever in modern day manga and anime. While One Piece and Bleach are very repetitive and keep adding new chapters that have almost no connection to past events, Naruto is on big story growing further and further and making you discover more about almost all of the characters throughout the series. Naruto? Best. Manga. Ever.
Vote & Comment
2

One Piece is a Japanese shõnen manga series written and illustrated by Eiichiro Oda.
4 votes
1 comment
One Piece - Voter Comments

Owlz says2014-05-14T11:51:04.1803029-05:00
Report Post
I got bored with Bleach. Felt relatively repetitive and they got caught juggling to many protagonists without taking time to flesh them all out. I've been avoiding the Shippuden half of Naruto. The original was ok at best. Some character development, a mediocre plot. Not bad. Shippuden I've been warned has a ton of filler in the anime and that if a character matures at all during a story arch that at the end they are reverted back as if nothing happened. Doesn't really sound good which is part of the reason I've avoided it. One Piece has a unique animation style and strange characters that are a turn off to most Otakus. BUT! It's story-arches, characters, and character development are top notch! They have fleshed out most of the protagonists and most side-characters incredibly well and because it is a "saga" type anime they had plenty of time fleshing out their story arches completely. The only other anime that has fleshed out story-arches this good that I can think of would be Hunter X Hunter. One Pieces cast and pots truly are top tier! I cannot praise it enough without spoiling or creating an even larger text wall so I'll stop here. But, if you can get past the silliness of some of the character designs and styles, I would highly recommend that even non-otakus should watch this anime. I have yet to encounter better ... in terms of character development and pacing.
Vote & Comment
3

BLEACH follows the story of Ichigo Kurosaki. For as long as he can remember, Ichigo Kurosaki has been able to see ghosts. But when he meets Rukia, a Soul Reaper who battles evil spirits known as Hollows, he finds his life is changed forever.
0 votes
0 comments
Bleach - Voter Comments
No Comments
Vote & Comment
No comments yet.
Leave a comment...
(Maximum 900 words)
Privacy Policy | Terms of Use
Sitemap | View Desktop Version
©2021 Debate.org. All rights reserved.