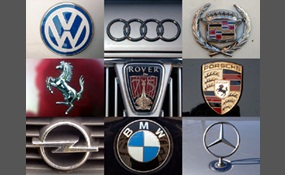 Which automotive brand do you prefer?

Opine this question, and utilize the answer form below to make your opinion public. If you desire to see a car brand included in the answer form, leave a comment that constitutes of the automotive brand's name.

The Ford Motor Company (commonly referred to as simply Ford) is an American multinational automaker headquartered in Dearborn, Michigan, a suburb of Detroit. It was founded by Henry Ford and incorporated on June 16, 1903. The company sells automobil... es and commercial vehicles under the Ford brand and most luxury cars under the Lincoln brand. Ford also owns Brazilian SUV manufacturer, Troller, and Australian performance car manufacturer FPV. In the past it has also produced tractors and automotive components   more
4 votes
1 comment
Ford Motor Company - Voter Comments

Dodge is an American brand of automobiles, minivans, and sport utility vehicles manufactured by FCA US LLC (formerly known as Chrysler Group LLC), based in Auburn Hills, Michigan. Dodge vehicles presently include the lower-priced badge variants of C... hrysler-badged vehicles as well as performance cars, though for much of its existence Dodge was Chrysler's mid-priced brand above Plymouth   more
2 votes
0 comments
Dodge - Voter Comments
No Comments
Vote & Comment
8

Cadillac, formally the Cadillac Motor Car Division, is a division of U.S.-based General Motors Company (GM) that markets luxury vehicles worldwide. Its primary markets are the United States, Canada, and China, but Cadillac-branded vehicles are distr... ibuted in 34 additional markets worldwide. Historically, Cadillac automobiles have always held a place at the top of the luxury field within the United States   more
1 vote
0 comments
Cadillac - Voter Comments
No Comments
Vote & Comment
9

Chrysler, officially FCA US LLC, is an American automobile manufacturer headquartered in Auburn Hills, Michigan and owned by Italian automaker Fiat. Chrysler is one of the "Big Three" American automobile manufacturers. It sells vehicles worldwide un... der its flagship Chrysler brand, as well as the Dodge, Jeep and Ram. Other major divisions include Mopar, its automotive parts and accessories division, and SRT, its performance automobile division. In 2014, FCA US LLC is the seventh biggest automaker in the world by production   more
1 vote
0 comments
Chrysler - Voter Comments
No Comments
Vote & Comment
11

The Rover Company is a former British car manufacturing company founded as Starley & Sutton Co. Of Coventry in 1878. It is the direct ancestor of the present day Land Rover company, which is a subsidiary of Jaguar Land Rover, in turn owned by the Ta... ta Group   more
0 votes
0 comments
Rover Company - Voter Comments
No Comments
Vote & Comment
15

Buick, formally the Buick Motor Division, is an American automobile division of the American manufacturer General Motors (GM). For much of its existence in the North American market, Buick has been marketed as a premium automobile brand, selling ent... ry-level luxury vehicles positioned above its mainstream GM stablemate Chevrolet, and below the flagship Cadillac division. Buick holds the distinction of being the oldest active American marque of automobile, and the original Buick Motor Company was a cornerstone of the establishment of General Motors in 1908. Before the establishment of General Motors, GM founder William C. Durant previously served as Buick's general manager, while his friend Louis Chevrolet worked as a racing driver for Buick and later learned automotive design working there. In 1939 Buick also pioneered the use of turn signals, which did not appear on other car brands until almost a decade later   more
0 votes
0 comments
Buick - Voter Comments
No Comments
Vote & Comment
20