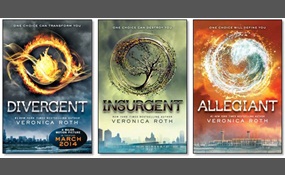 Which book from the Divergent series is best

Divergent is the debut novel of American novelist Veronica Roth, published by HarperCollins Children's Books in 2011. It is a young-adult dystopian novel set in the so-called Divergent Universe, that features a post-apocalyptic version of Chicago. T... he novel follows Beatrice "Tris" Prior as she explores her identity within a society that defines its citizens by their social and personality-related affiliation with five different factions. Also driving the novel is a romantic subplot between Tris and one of her trainers in the Dauntless faction, nicknamed Four.The novel has been compared to other young adult books such as The Hunger Games and The Maze Runner because of its similar themes and target audience. In particular, the novel explores the themes common to young adult fiction, such as adult authority and the transition from childhood to maturity, as well as broader motifs, such as the place of violence and social structures within a post-apocalyptic society. Its major plot device, the division of society into personality types, is similar to Philip K. Dick's 1964 novel Clans of the Alphane Moon and Rupert Thomson's Divided Kingdom   more
5 votes
0 comments
Divergent - Voter Comments
No Comments
Vote & Comment
2