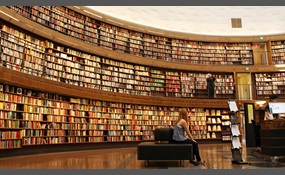 Which book has had the biggest influence in shaping the world to date?

The Bible by Various Authors

The sacred book of Christianity, a collection of ancient writings including the books of both the Old Testament and the New Testament.
7 votes
4 comments
The Bible by Various Authors - Voter Comments

The Quran by followers of Muhammad

The sacred text of Islam, divided into 114 chapters, or suras: revered as the word of God, dictated to Muhammad by the archangel Gabriel, and accepted as the foundation of Islamic law, religion, culture, and politics.
2 votes
0 comments
The Quran by followers of Muhammad - Voter Comments
No Comments
Vote & Comment
3

The Origin of Species by Charles Darwin

Published in 1859, this book had such impact that ripples are still being felt through the scientific and theological communities. In The Origin of Species, Darwin attempts to answer the question of why there is so much diversity of life. He puts fo... rth the idea of evolution by natural selection and that common factors lead to change. He makes the point that although harsh, natural selection is a process that promotes improvement in all living things. According to The Origin of Species, “the extinction of some forms will be inevitable in a world governed by natural selection. Species will often be exterminated by competitors, thus in effect leaving room for the more successful species to multiply.” From Darwin’s work comes new emphasis on the study of nature and the importance of finding a way to share the planet with all species. It is most likely the most important biological book ever written   more
2 votes
0 comments
The Origin of Species by Charles Darwin - Voter Comments
No Comments
Vote & Comment
4

The Art of War by Sun Tzu

The Art of War guides readers on the winning of conflicts. It offers advice on warfare designed to assist the reader in triumphing over his enemies. It was intended for a military audience, advising on strategy and principles of battle but it has be... en used beyond its original military significance. Besides military leaders, who were known students of Sun Tzu, such as Yamamoto who was responsible for planning the attack on Pearl Harbor, Mao Tse-tung who gained control of China through guerrilla warfare, General Giap who was the man behind victories over the French and American troops in Vietnam, and General Colin Powell during the “shock and awe” campaigns of Desert Storm and Desert Shield. The Art of War is utilized in business, inspiring wins in trials and negotiations. It’s also applied in coaching and sports, helping teams strategize for the win. Its principles can be adapted in a myriad of ways and although written approximately 500 B.C., it continues to inspire readers today. Rumor has it that it’s general advice and guidance has even been adapted to the battlefield of “dating   more
1 vote
1 comment
The Art of War by Sun Tzu - Voter Comments

MakeSensePeopleDont says2015-07-12T19:28:40.2468251-05:00
Report Post
The art of war is used and referenced in life by many CEOs and political leaders across the globe. The premise may be based on war but the contents can and are used in daily life.
Vote & Comment
5

The Communist Manifesto by Karl Marx and Friedrich Engels

This work written by Karl Marx and Friedrich Engels in 1847 and published in 1848, explained the principles of Communists. It calls for the revolutionary process necessary to overthrow social order and advocates a classless society, suggesting worki... ng men in all countries unite. It has become one of the most influential political writings in all of history. Marx suggests that just as history has seen the evolution of Feudalism into Capitalism, Capitalism will give way to Socialism. This book was published during a time when workers lived in poverty and had terrible working conditions. It is no surprise that it brought hope to the working class man. It remains to this day one of the books with the most impact of all time   more
1 vote
0 comments
The Communist Manifesto by Karl Marx and Friedrich Engels - Voter Comments
No Comments
Vote & Comment
6

Written in 1851 and published in 1852, Uncle Tom’s Cabin depicts the true picture of slavery in the South. The book can be credited with changing the way Americans, especially those in the North at the time viewed slavery. Uncle Tom’s Cabin was a ca... ll for Americans to live by the principles on which the country was formed, including equality for all. It contributed to the abolitionist movement and eventually the Civil War. Uncle Tom’s Cabin was a best-seller, it sold over 10,000 copies in the first week of publication and over 300,000 in its first year in the United States alone. Even today readers relate to this book and it serves as a reminder of human rights   more
0 votes
0 comments
Uncle Tom’s Cabin by Harriet Beecher Stowe - Voter Comments
No Comments
Vote & Comment
7

The Republic by Plato

Plato attempted to answer the question of what motivates man to behave in a just manner. In attempting to answer the question, he set about defining what justice is. His work breaks down the idea of justice and is first to define it in terms of eith... er political or societal. He breaks down society into classes and explains the need for people to fulfill the roles they were meant for. Plato then goes on to define the world in terms of visible and intelligible. He explains the intelligible world is made up of Forms. Although difficult to summarize in just a few words, The Republic attempts to offer a path for those wishing to acquire knowledge and move toward the greater good. As with many of his works the main character is Socrates. This book is considered by many to be Plato’s most important work, originating most likely from the middle dialogues of his teachings after he founded his academy, around 375 – 387 B.C. Plato is considered to be one of the most significant philosophers that ever lived and his work in The Republic formed the groundwork necessary for Western culture and philosophy. It continues to this day to have tremendous influence on modern day philosophers and has provoked deep thought and radical change for many   more
0 votes
0 comments
The Republic by Plato - Voter Comments
No Comments
Vote & Comment
8

The Rights of Man by Thomas Paine

The Rights of Man written in 1791 was Thomas Paine’s assessment of the French Revolution. He was already known for his works, Common Sense and The American Crisis. The Rights of Man took two years to write and looks at the rights that should be gran... ted to every human being including the right to adopt government that benefits their nation as a whole. Paine puts forth the idea that if any institution does not have the welfare of the nation as its goal, supported by its people, it becomes illicit and no institution should be above this ideal including the military or monarchy of a nation. Paine participated in the French Revolution as a member of the French National Assembly. The Rights of Man caused all sorts of discord and Paine, although not present, was put on trial in his native country of England and convicted of libel against the crown. The rights that Paine discusses in his book opened the doors to the building of civil rights earning it a place on this list   more
0 votes
0 comments
The Rights of Man by Thomas Paine - Voter Comments
No Comments
Vote & Comment
9

A Vindication of the Rights of Women by Mary Wollstonecraft