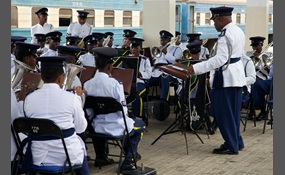 The trombone is a musical instrument in the brass family. Like all brass instruments, sound is produced when the player’s vibrating lips cause the air column inside the instrument to vibrate. Nearly all trombones have a telescoping slide mechanism t... hat varies the length of the instrument to change the pitch. Special variants like the valve trombone and superbone have three valves like those on the trumpet.The word trombone derives from Italian tromba and -one, so the name means "large trumpet". The trombone has a predominantly cylindrical bore like its valved counterpart the baritone and in contrast to its conical valved counterparts, the euphonium and the horn. The most frequently encountered trombones are the tenor trombone and bass trombone. The most common variant, the tenor, is pitched in B♭, an octave below the B♭ trumpet and an octave above the B♭ tuba. The once common E♭ alto trombone became less widely used as improvements in technique extended the upper range of the tenor, but it is now enjoying a resurgence due to its lighter sonority which is appreciated in many classical and early romantic works   more
4 votes
1 comment
Trombone - Voter Comments

A high-pitched instrument with a mouthpiece similar to a trumpet's, the sound is mellow and can be very quiet or very soft. It is considered a rather difficult instrument to learn to play.
2 votes
0 comments
French Horn - Voter Comments
No Comments
Vote & Comment
3

A trumpet is a musical instrument. It is the highest register in the brass family. Trumpets are among the oldest musical instruments, dating back to at least 1500 BC. They are played by blowing air through closed lips, producing a "buzzing" sound th... at starts a standing wave vibration in the air column inside the instrument. Since the late 15th century they have primarily been constructed of brass tubing, usually bent twice into a rounded oblong shape.There are several types of trumpet. The most common is a transposing instrument pitched in B♭ with a tubing length of about 148 cm. Earlier trumpets did not have valves, but modern instruments generally have either three piston valves or, more rarely, three rotary valves. Each valve increases the length of tubing when engaged, thereby lowering the pitch.A musician who plays the trumpet is called a trumpet player or trumpeter   more
1 vote
0 comments
Trumpet/Cornet/Bugle - Voter Comments
No Comments
Vote & Comment
4

The euphonium is a conical-bore, baritone-voiced brass instrument.The euphonium derives its name from the Greek word euphonos, meaning "well-sounding" or "sweet-voiced". The euphonium is a valved instrument; nearly all current models are piston valv... ed, though rotary valved models do exist.A person who plays the euphonium is sometimes called a euphoniumist, euphophonist, or a euphonist, while British players often colloquially refer to themselves as euphists, or euphologists. Similarly, the instrument itself is often referred to as eupho or euph   more
0 votes
0 comments
Euphonium - Voter Comments
No Comments
Vote & Comment
6

The helicon is a brass musical instrument in the tuba family. Most are B♭ basses, but they also commonly exist in E♭, F, and tenor sizes, as well as other types to a lesser extent.The sousaphone is a specialized version of the helicon. The original ... sousaphone produced by J. W. Pepper & Son, Inc. Had an upright bell, hence the nickname "raincatcher". Later versions differ primarily in two ways: a bell shaped to face forwards with a larger flare, and a bell diameter of 22 to 28 inches, and a "goose-neck" leadpipe which offers greater adjustability of mouthpiece position at the expense of tone quality, while both instruments have circular shapes and are designed to be worn on the shoulder.The instrument is very popular in Central and Eastern Europe and is a common choice for military fanfares. It is used by Ed Neuhauser of the traditional folk band Bellowhead.Its range is two octaves below that of a cornet   more
0 votes
0 comments
Helicon - Voter Comments
No Comments
Vote & Comment
7

The saxotromba is a valved brasswind instrument invented by the Belgian instrument-maker Adolphe Sax around 1844. It was designed for the mounted bands of the French military, probably as a substitute for the French horn. The saxotrombas comprised a...  family of half-tube instruments of different pitches. By about 1867 the saxotromba was no longer being used by the French military, but specimens of various sizes continued to be manufactured until the early decades of the twentieth century, during which time the instrument made sporadic appearances in the opera house, both in the pit and on stage. The instrument is often confused with the closely related saxhorn.The technical specifications of the saxotromba and the original constitution of its family are not known with any certainty. Initially, the instrument had the same vertical design as its close relation the saxhorn, with the bell pointing upwards, though later models of both families were designed with bells that faced forwards   more
0 votes
0 comments
Saxotromba - Voter Comments
No Comments
Vote & Comment
Leave a comment...
(Maximum 900 words)