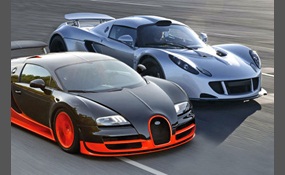 Which car is best, Bugatti Veyron Super Sport or the Hennessey Venom GT?

The Bugatti Veyron EB 16.4 is a mid-engined sports car, designed and developed by the Volkswagen Group and manufactured in Molsheim, France by Bugatti Automobiles S.A.S.The Super Sport version of the Veyron is the fastest street-legal production car...  in the world, with a top speed of 431.072 km/h. The original version has a top speed of 408.47 km/h. It was named Car of the Decade by the BBC television programme Top Gear. The standard Bugatti Veyron also won Top Gear's Best Car Driven All Year award in 2005.On 6 April 2013, Bugatti set the record for having the highest top speed of any roadster in the world with the Veyron Grand Sport Vitesse, reaching on average a top speed of 408.84 km/h.The Veyron's chief designer was Hartmut Warkuss, and the exterior was designed by Jozef Kabaň of Volkswagen, with much of the engineering work being conducted under the guidance of engineering chief Wolfgang Schreiber.A number of special variants have been produced. In December 2010, Bugatti began offering prospective buyers the ability to customize exterior and interiors colours by using the Veyron 16.4 Configurator application on the marque's official website   more
10 votes
1 comment
Bugatti Veyron - Voter Comments

The Hennessey Venom GT is an American sports car manufactured by Texas-based Hennessey Performance Engineering. It was revealed on March 29, 2010.On January 21, 2013, the Venom GT set a Guinness Book of Records for the fastest production car from 0–... 300 kilometres per hour with an average acceleration time of 13.63 seconds. In addition, the car set an unofficial record for 0–200 mph acceleration at 14.51 seconds, beating the Koenigsegg Agera R's time of 17.68 seconds, making it the unofficial fastest accelerating car in the world.On April 3, 2013, the Hennessy Venom GT crested 427.6 km/h over the course of 2 miles during testing at United States Naval Air Station Lemoore in Lemoore, California. Hennessey used two VBOX 3i data logging systems to document the run and had VBOX officials on hand to certify the numbers.On February 14, 2014, on the Kennedy Space Center’s 3.22-mile shuttle landing strip in Florida, the Hennessey team recorded a top speed of 270.49 mph with Director of Miller Motorsport Park, Brian Smith, at the wheel   more
9 votes
0 comments
Hennessey Venom GT - Voter Comments
No Comments
Vote & Comment
No comments yet.
Leave a comment...
(Maximum 900 words)
Privacy Policy | Terms of Use
Sitemap | View Desktop Version
©2020 Debate.org. All rights reserved.