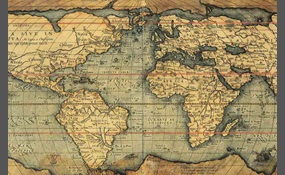 Which Country has the Most Interesting History?

The United States of America, commonly referred to as the United States, America, and sometimes the States, is a federal republic consisting of 50 states and a federal district. The 48 contiguous states and Washington, D.C., are in central North Ame... rica between Canada and Mexico. The state of Alaska is the northwestern part of North America and the state of Hawaii is an archipelago in the mid-Pacific. The country also has five populated and nine unpopulated territories in the Pacific and the Caribbean. At 3.80 million square miles and with around 318 million people, the United States is the world's third- or fourth-largest country by total area and third-largest by population. It is one of the world's most ethnically diverse and multicultural nations, the product of large-scale immigration from many countries. The geography and climate of the United States is also extremely diverse, and it is home to a wide variety of wildlife.Paleo-Indians migrated from Eurasia to what is now the U.S. mainland around 15,000 years ago, with European colonization beginning in the 16th century. The United States emerged from 13 British colonies located along the Atlantic seaboard   more
4 votes
1 comment
United States of America - Voter Comments

North Korea, officially the Democratic People's Republic of Korea, is a country in East Asia, in the northern part of the Korean Peninsula. The name Korea is derived from Goryeo, a name used by ancient and medieval kingdoms. The capital and largest ... city is Pyongyang. North Korea shares a land border with China to the north and north-west, along the Amnok and Tumen rivers. A small section of the Tumen River also forms North Korea's short border with Russia to the northeast. The Korean Demilitarized Zone marks the boundary between North Korea and South Korea. The legitimacy of this border is not accepted by either side, as both states claim to be the legitimate government of the entire peninsula.Korea was annexed by the Empire of Japan in 1910. In 1945, when Japan was defeated in World War II, Korea was divided into two occupied zones, with the north occupied by the Soviet Union and the south by the United States. Negotiations on unification failed, and in 1948 two separate governments were formed: the Democratic People's Republic of Korea in the north, and the Republic of Korea in the south. The conflicting claims of sovereignty led to the Korean War in 1950   more
2 votes
2 comments
North Korea - Voter Comments

Egypt is an Afro-Asiatic transcontinental country spanning the northeast corner of Africa and southwest corner of Asia, via a land bridge formed by the Sinai Peninsula. Most of Egypt's territory of 1,010,000 square kilometres lies within the Nile Va... lley of North Africa, but it is also considered a Mediterranean country as it is bordered by the Mediterranean Sea to the north. It is also bordered by the Gaza Strip and Israel to the northeast, the Gulf of Aqaba to the east, the Red Sea to the east and south, Sudan to the south and Libya to the west.With over 87 million inhabitants, Egypt is the largest country in North Africa and the Arab World, the third-largest in Africa, and the fifteenth-most populous in the world. The great majority of its people live near the banks of the Nile River, an area of about 40,000 square kilometres, where the only arable land is found. The large regions of the Sahara Desert, which constitute most of Egypt's territory, are sparsely inhabited. About half of Egypt's residents live in urban areas, with most spread across the densely populated centres of greater Cairo, Alexandria and other major cities in the Nile Delta   more
1 vote
1 comment
Egypt - Voter Comments

Jordan, officially the Hashemite Kingdom of Jordan, is an Arab kingdom in Western Asia, on the East Bank of the Jordan River. Jordan is bordered by Saudi Arabia to the south and east, Iraq to the north-east, Syria to the north, and Israel and State ... of Palestine to the west.After the post-World War I division of West Asia by Britain and France, the Emirate of Transjordan was officially recognized by the Council of the League of Nations in 1922. In 1946, Jordan became an independent sovereign state officially known as the Hashemite Kingdom of Transjordan. After capturing the West Bank during the 1948 Arab–Israeli War, Abdullah I took the title King of Jordan. The name of the state was changed to The Hashemite Kingdom of Jordan on 1 December 1948.Although Jordan is a constitutional monarchy, the king holds wide executive and legislative powers. Jordan is classified as a country of "high human development" by the 2014 Human Development Report, and an emerging market with the third freest economy in West Asia and North Africa. Jordan has an "upper middle income" economy   more
1 vote
0 comments
Jordan - Voter Comments
No Comments
Vote & Comment
8

Portugal, officially the Portuguese Republic, is a sovereign nation-state in Europe. It is located on the Iberian Peninsula, and it is the westernmost country of mainland Europe, being bordered by the Atlantic Ocean to the west and south and by Spai... n to the north and east. Aside from continental Portugal, the Portuguese Republic holds sovereignty over the Atlantic archipelagos of Azores and Madeira, which are autonomous regions of Portugal. The country is named after its second largest city, Porto, whose name derives from Latin "Portus" and the Celtic place-name "Cale".The land within the borders of the current Portuguese Republic has been continually fought over and settled since prehistoric times. The Celts and the Romans were followed by the Visigothic and the Suebi Germanic tribes, which were themselves later invaded by the Moors. These Muslim peoples were eventually expelled during the Christian Reconquista of the peninsula. By 1139, Portugal established itself as a kingdom independent from León   more
1 vote
0 comments
Portugal - Voter Comments
No Comments
Vote & Comment
10

How did you not add this as a first option? Shame on you.
0 votes
0 comments
'Murica - Voter Comments
No Comments
Vote & Comment
15

greatkitteh says2015-06-03T21:39:53.4894858-05:00
Report Post
I feel like NK is overly biased against, And may not have the best history, but is very very interesting. The Kim dynasty has always been a subject of interest for me, and that doesn`t mean i support them, although I have to admit Kim-il-sung was alright. America`s history is very short, And greece and egypt are close seconds, as they ruled since the BC and evolved. Italy also is interesting, And still better than america, Which is very,very interesting. Even singapore was more interesting than USA.

Diqiucun_Cunmin says2015-06-04T09:04:55.5881256-05:00
Report Post
58539672: It's great that you find those periods interesting! They most certainly are, but I must add that many of the interesting events during the Three Kingdoms period were rumours or figments of Luo Guanzhong's imagination.