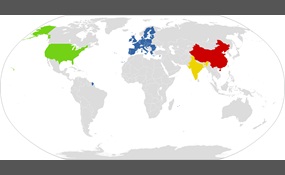 Which country is most likely to become the 2nd superpower alongside the US?

China, officially the People's Republic of China, is a sovereign state located in East Asia. It is the world's most populous country, with a population of over 1.35 billion. The PRC is a single-party state governed by the Communist Party, with its s... eat of government in the capital city of Beijing. It exercises jurisdiction over 22 provinces, five autonomous regions, four direct-controlled municipalities, and two mostly self-governing special administrative regions. The PRC also claims the territories governed by the Republic of China, a separate political entity commonly known as Taiwan today, as a part of its territory, which includes the island of Taiwan as Taiwan Province, Kinmen and Matsu as a part of Fujian Province and islands the ROC controls in the South China Sea as a part of Hainan Province, a claim which is controversial due to the complex political status of Taiwan.Covering approximately 9.6 million square kilometers, China is the world's second-largest country by land area, and either the third or fourth-largest by total area, depending on the method of measurement   more
11 votes
2 comments
China - Voter Comments

Atheist-Independent says2015-07-16T23:31:38.5966992-05:00
Report Post
Although China certainly has major obstacles in its way such as over population, pollution, corruption, and lack of a major nuclear arsenal, they are better positioned than Russia is to become a super power industrially. The primary reason why they are not the world superpower is because they do not have the political influence that the USA has.

Russia, also officially known as the Russian Federation, is a country in northern Eurasia. It is a federal semi-presidential republic. From northwest to southeast, Russia shares land borders with Norway, Finland, Estonia, Latvia, Lithuania and Polan... d, Belarus, Ukraine, Georgia, Azerbaijan, Kazakhstan, China, Mongolia, and North Korea. It shares maritime borders with Japan by the Sea of Okhotsk and the US state of Alaska across the Bering Strait. At 17,075,400 square kilometres, Russia is the largest country in the world, covering more than one-eighth of the Earth's inhabited land area. Russia is also the world's ninth most populous nation with 143 million people as of 2012. Extending across the entirety of northern Asia and much of Eastern Europe, Russia spans nine time zones and incorporates a wide range of environments and landforms.The nation's history began with that of the East Slavs, who emerged as a recognizable group in Europe between the 3rd and 8th centuries AD. Founded and ruled by a Varangian warrior elite and their descendants, the medieval state of Rus arose in the 9th century   more
8 votes
0 comments
Russia - Voter Comments
No Comments
Vote & Comment
3

South Korea, officially the Republic of Korea, and commonly referred to as Korea, is a country in East Asia, constituting the southern part of the Korean Peninsula. The name Korea is derived from the Kingdom of Goryeo, also spelled as Koryŏ. It shar... es land borders with North Korea to the north, and oversea borders with Japan to the east and China to the west. Roughly half of the country's 50 million people reside in the metropolitan area surrounding its capital, the Seoul Capital Area, which is the second largest in the world with over 25 million residents.Korea was inhabited as early as the Lower Paleolithic period and its civilization began with the founding of Gojoseon. After the unification of the Three Kingdoms of Korea in 668, Korea enjoyed over a millennium of relative tranquility under dynasties lasting for centuries in which its trade, culture, literature, science and technology flourished. It was annexed by the Japanese Empire in 1910 and after its defeat in 1945, Korea was divided into Soviet and U.S. zones of occupation, with the latter becoming the Republic of Korea in 1948   more
2 votes
0 comments
South Korea - Voter Comments
No Comments
Vote & Comment
5

Greenland is an autonomous country within the Kingdom of Denmark, located between the Arctic and Atlantic Oceans, east of the Canadian Arctic Archipelago. Though physiographically a part of the continent of North America, Greenland has been politica... lly and culturally associated with Europe for more than a millennium. In 2008, the people of Greenland passed a referendum supporting greater autonomy; 75% of votes cast were in favour. Greenland is, in area, the world's largest island, over three-quarters of which is covered by the only contemporary ice sheet outside of Antarctica. With a population of about 56,370, it is the least densely populated country in the world.Greenland has been inhabited off and on for at least the last 4,500 years by Arctic peoples whose forebears migrated there from what is now Canada. Norsemen settled the uninhabited southern part of Greenland, beginning in the 10th century, and Inuit peoples arrived in the 13th century. The Norse colonies disappeared in the late 15th century. In the early 18th century, Scandinavia and Greenland came back into contact with each other, and Denmark established sovereignty over the island   more
0 votes
0 comments
Greenland - Voter Comments
No Comments
Vote & Comment
6

India, officially the Republic of India, is a country in South Asia. It is the seventh-largest country by area, the second-most populous country with over 1.2 billion people, and the most populous democracy in the world. Bounded by the Indian Ocean ... on the south, the Arabian Sea on the south-west, and the Bay of Bengal on the south-east, it shares land borders with Pakistan to the west; China, Nepal, and Bhutan to the north-east; and Burma and Bangladesh to the east. In the Indian Ocean, India is in the vicinity of Sri Lanka and the Maldives; in addition, India's Andaman and Nicobar Islands share a maritime border with Thailand and Indonesia.Home to the ancient Indus Valley Civilisation mostly in present day Pakistan and a region of historic trade routes and vast empires, the Indian subcontinent was identified with its commercial and cultural wealth for much of its long history. Four religions—Hinduism, Buddhism, Jainism, and Sikhism—originated here, whereas Judaism, Zoroastrianism, Christianity, and Islam arrived in the 1st millennium CE and also helped shape the region's diverse culture   more
0 votes
0 comments
India - Voter Comments
No Comments
Vote & Comment
Leave a comment...
(Maximum 900 words)

58539672 says2015-07-17T00:29:38.7644772-05:00
Report Post
@Atheist-Independent The EU accounts for 29% of the entire worlds total wealth, an amount that can only be beat by the US' 30%. They include 2 members of the security council and have several well respected participants in global politics. Their combined militaries also make up a force that rivals all but the US military (including having more Aircraft carriers than all the other nations on this list combined). Economic, Political, and Military strength that is almost global makes them the closest contender for the next superpower.

58539672 says2015-07-17T23:53:18.5686332-05:00
Report Post
@triangle.128k Chinas military can't project force beyond their immediate region. The EU can. And as for economics, you can't just look at current figures. You have to make accurate assumptions on what that economy will look like in the future. China has a tremendous economic growth rate, but that rate is slowing each year. Also stocks in Chinese companies have been overpriced for years because investors think China is a steady source of income. The second China hits a snag in the economy, those investors will try to sell their stocks, only to find that they weren't as valuable as they thought. Its kind of like the housing market crash in the US in 2008. China, at the moment, is a fast growing bubble that will pop when it either gets to big or something touches it. Also the second another country can afford to pay workers less, investors will leave China as fast as they came in (such is the curse of economies built upon cheap labor). The EU's economy, though on a down turn, is much more stable (even with Greece).
Privacy Policy | Terms of Use
Sitemap | View Desktop Version
©2020 Debate.org. All rights reserved.