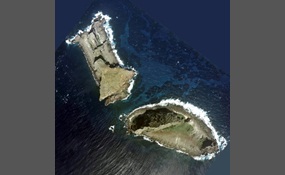 Which country should have ownership over the Senkaku/Diaoyu islands?

China, officially the People's Republic of China, is a sovereign state located in East Asia. It is the world's most populous country, with a population of over 1.35 billion. The PRC is a single-party state governed by the Communist Party, with its s... eat of government in the capital city of Beijing. It exercises jurisdiction over 22 provinces, five autonomous regions, four direct-controlled municipalities, and two mostly self-governing special administrative regions. The PRC also claims the territories governed by the Republic of China, a separate political entity commonly known as Taiwan today, as a part of its territory, which includes the island of Taiwan as Taiwan Province, Kinmen and Matsu as a part of Fujian Province and islands the ROC controls in the South China Sea as a part of Hainan Province, a claim which is controversial due to the complex political status of Taiwan.Covering approximately 9.6 million square kilometers, China is the world's second-largest country by land area, and either the third or fourth-largest by total area, depending on the method of measurement   more
5 votes
0 comments
China - Voter Comments
No Comments
Vote & Comment
2

Taiwan, officially the Republic of China, is a sovereign state in East Asia. The Republic of China, originally based in mainland China, now governs the island of Taiwan, which makes up over 99% of its territory, as well as Penghu, Kinmen, Matsu, and...  other minor islands. Neighboring states include the People's Republic of China to the west, Japan to the east and northeast, and the Philippines to the south. Taipei is the seat of the central government. New Taipei, encompassing the metropolitan area surrounding Taipei proper, is the most populous city.The island of Taiwan was mainly inhabited by Taiwanese aborigines until the Dutch and Spanish settlement during the Age of Discovery in the 17th century, when Han Chinese began immigrating to the island. In 1662, the pro-Ming loyalist Koxinga expelled the Dutch and established the first Han Chinese polity on the island, the Kingdom of Tungning. The Qing Dynasty of China later defeated the kingdom and annexed Taiwan. By the time Taiwan was ceded to Japan in 1895, the majority of Taiwan's inhabitants were Han Chinese either by ancestry or by assimilation. The Republic of China was established in China in 1912   more
3 votes
0 comments
Taiwan - Voter Comments
No Comments
Vote & Comment
3

Japan is an island nation in East Asia. Located in the Pacific Ocean, it lies to the east of the Sea of Japan, China, North Korea, South Korea and Russia, stretching from the Sea of Okhotsk in the north to the East China Sea and Taiwan in the south....  The characters that make up Japan's name mean "sun-origin", which is why Japan is often referred to as the "Land of the Rising Sun".Japan is a stratovolcanic archipelago of 6,852 islands. The four largest islands are Honshu, Hokkaido, Kyushu, and Shikoku, which together comprise about ninety-seven percent of Japan's land area. Japan has the world's tenth-largest population, with over 126 million people. Honshū's Greater Tokyo Area, which includes the de facto capital of Tokyo and several surrounding prefectures, is the largest metropolitan area in the world, with over 30 million residents.Archaeological research indicates that people lived in Japan as early as the Upper Paleolithic period. The first written mention of Japan is in Chinese history texts from the 1st century AD. Influence from other regions, mainly China, followed by periods of isolation, particularly from Western European influence, has characterized Japan's history   more
2 votes
1 comment
Japan - Voter Comments

Unclaimed by neither country