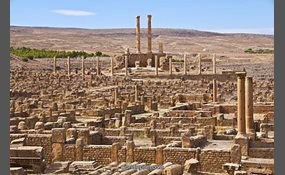 Which country would you rather go back in time and live in?

Athenian city state (when it was a democracy)

The Roman Empire was the post-Republican period of the ancient Roman civilization, characterized by an autocratic form of government and large territorial holdings around the Mediterranean Sea in Europe, Africa, and Asia. The 500-year-old Roman Repu... blic, which preceded it, had been destabilized through a series of civil wars. Several events marked the transition from Republic to Empire, including Julius Caesar's appointment as perpetual dictator; the Battle of Actium; and the granting of the honorific Augustus to Octavian by the Roman Senate.The first two centuries of the Empire were a period of unprecedented stability and prosperity known as the Pax Romana. It reached its greatest expanse during the reign of Trajan. In the 3rd century, the Empire underwent a crisis that threatened its existence, but was reunified and stabilized under the emperors Aurelian and Diocletian. Christians rose to power in the 4th century, during which time a system of dual rule was developed in the Latin West and Greek East. After the collapse of central government in the West in the 5th century, the eastern half of the Roman Empire continued as what would later be known as the Byzantine Empire   more
4 votes
1 comment
Roman Empire - Voter Comments

The Mongol Empire, which existed during the 13th and 14th centuries, was the largest contiguous land empire in history. Beginning in the Central Asian steppes, it eventually stretched from Central Europe to the Sea of Japan, extending northwards int... o Siberia, eastwards and southwards into the Indian subcontinent, Indochina, and the Iranian plateau, and westwards as far as the Levant and Arabia.The empire unified Mongol and Turkic tribes of historical Mongolia under the leadership of Genghis Khan, who was proclaimed ruler of all Mongols in 1206. The empire grew rapidly under his rule and then under his descendants, who sent invasions in every direction. The vast transcontinental empire connected the east with the west with an enforced Pax Mongolica allowing trade, technologies, commodities, and ideologies to be disseminated and exchanged across Eurasia.Mongol conquests resulted in some of the most destructive wars in human history. In Iran, the Mongol invasion resulted in extermination, disease, and destruction of irrigation systems resulting in mass emigration, famine, and drastic population decline   more
2 votes
1 comment
Mongol Empire - Voter Comments

The Holy Roman Empire was a multi-ethnic complex of territories in central Europe that developed during the Middle Ages and continued until its dissolution in 1806. The core and largest territory of the empire was the Kingdom of Germany, though it i... ncluded at times the Kingdom of Italy, the Kingdom of Bohemia, and the Kingdom of Burgundy, as well as numerous other territories.The empire grew out of East Francia, a primary division of the Frankish Empire. On Christmas Day 800, Pope Leo III crowned the Frankish king Charlemagne as Emperor, reviving the title in Western Europe after more than three centuries. After Charlemagne died, the title passed in a desultory manner during the decline and fragmentation of the Carolingian dynasty, eventually falling into disuse by 924. The title was revived in 962 when Otto I was crowned emperor, fashioning himself as the successor of Charlemagne and beginning a continuous existence of the empire for over eight centuries. Some historians refer to the coronation of Charlemagne as the origin of the empire, while others prefer the coronation of Otto I as its beginning   more
1 vote
1 comment
Holy Roman Empire - Voter Comments

The Byzantine Empire was the predominantly Greek-speaking continuation of the eastern half of the Roman Empire during Late Antiquity and the Middle Ages. Its capital city was Constantinople, originally known as Byzantium. Often called the Eastern Ro... man Empire in this context, it survived the 5th century fragmentation and fall of the Western Roman Empire and continued to exist for an additional thousand years until it fell to the Ottoman Turks in 1453. During most of its existence, the empire was the most powerful economic, cultural, and military force in Europe. Both "Byzantine Empire" and "Eastern Roman Empire" are historiographical terms created after the end of the realm; its citizens continued to refer to their empire as the Roman Empire, or Romania, and to themselves as "Romans."Several events from the 4th to 6th centuries mark the transitional period during which the Roman Empire's east and west divided. In 285, the emperor Diocletian partitioned the Roman Empire's administration into eastern and western halves. Between 324 and 330, Constantine I transferred the main capital from Rome to Byzantium, later known as Constantinople and Nova Roma   more
0 votes
0 comments
Byzantine Empire - Voter Comments
No Comments
Vote & Comment
11

The Roman Republic was the period of ancient Roman civilization beginning with the overthrow of Roman Kingdom, traditionally dated to 509 BC, and ending in 27 BC with the establishment of the Roman Empire. It was during this period that Rome expande... d from the city of Rome itself to hegemony over the entire Mediterranean world. During the first two centuries of its existence the Roman Republic expanded through a combination of conquest and alliance, from central Italy to the entire Italian peninsula. By the following century it included North Africa, Spain, and what is now southern France. Two centuries after that, towards the end of the 1st century BC, it included the rest of modern France, Greece, and much of the eastern Mediterranean. By this time, internal tensions led to a series of civil wars, climaxing with the assassination of Julius Caesar, which ended with the establishment of the Roman Empire. The exact date of the transition to the Roman Empire can be a matter of interpretation   more
0 votes
0 comments
Roman Republic - Voter Comments
No Comments
Vote & Comment
12